Biden takes the helm as 46th president: 'Democracy has prevailed'

Here's a look at how much a traditional Thanksgiving meal will cost in 2020
0 comments
Share this
By Mike Dorning, Bloomberg News (TNS)

Turkey prices are sinking as the pandemic may keep some American families from hosting big groups this Thanksgiving.

The price of ingredients in a traditional turkey dinner for 10 people is down to the lowest level in a decade, driven largely by grocers discounting the meal's centerpiece to attract customers, according to the American Farm Bureau Federation.

The drop in turkey prices — 7% lower than last year for a 16-pound bird, according to Farm Bureau — comes as many retailers are preparing to sell a greater variety of food this year. More families are cash-strapped and grocery chains expect some to make new choices as they confront preparing the holiday meal for the first time without relatives' help.

More than a third of Americans plan to spend less on Thanksgiving this year, according to a survey from mobile-rewards platform Ibotta Inc.

"Pricing whole turkeys as 'loss leaders' to entice shoppers and move product is a strategy we're seeing retailers use that's increasingly common the closer we get to the holiday," said John Newton, chief economist for Farm Bureau, which has been surveying retail prices ahead of the holiday since 1986.

The average overall cost of a traditional Thanksgiving dinner for 10 this year is $46.90, down 4% from last year, according to the farm group's survey. The survey is based on a menu of turkey, stuffing, sweet potatoes, rolls with butter, peas, cranberries, a veggie tray, pumpkin pie with whipped cream, and coffee and milk.

Thanksgiving celebrations will look different for many Americans this year due to the COVID-19 pandemic. Gatherings are likely to be fewer and farther between, with social distancing and perhaps even remote family get-togethers. One tradition that continues this year is the American Farm Bureau Federation’s annual cost survey of classic items found on the Thanksgiving Day dinner table. This year’s national average cost was calculated using more than 230 surveys completed with pricing data from all 50 states. 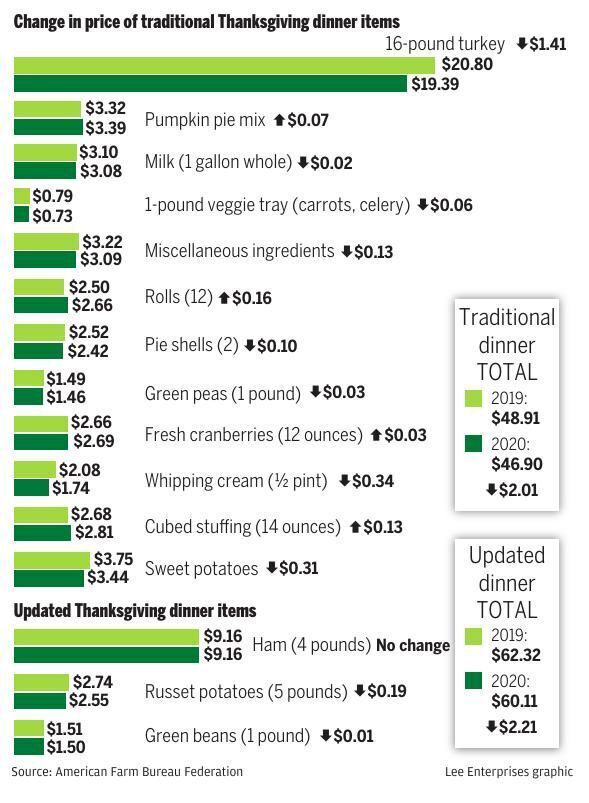 10 side dishes, desserts and more recipes to try for Thanksgiving

Recipe roundup: Here are a few suggestions for anyone still putting together their Thanksgiving menu. Also, a twist on a classic turkey sandwich that's perfect for leftovers.

This bourbon-brined turkey recipe will not only leave you with a moist turkey, it'll also give you the fixings for the best pan gravy ever.

In between curating your ideal Thanksgiving menu, don't forget to give some thought to the cocktail list. You need a stiff one, and this bourbon cider beverage is the perfect way to kick things off.

The holidays are filled with classic American comfort foods, and when it comes to casseroles, there is one that trumps all the rest: green bean casserole.

If you're trying to add to your Thanksgiving dinner with an underrated star, consider the classic broccoli casserole.

Great for game day, a night where you want a comforting meal or a holiday celebration, this satisfying Buffalo chicken casserole recipe will surely be a crowd-pleaser.

If pecan pie isn't a classic in your home during the holidays, this is the year to finally add the delicious confection to the mix.

How to make whipped cream from a can of coconut milk

Did you know that you can make luscious whipped cream from a can of coconut milk? Here’s how.

Whether using leftover turkey or turkey from the deli, this gives a new twist to a turkey sandwich.

While family gatherings this November may look different than years past, those choosing to celebrate with traditional holiday fare will welco…