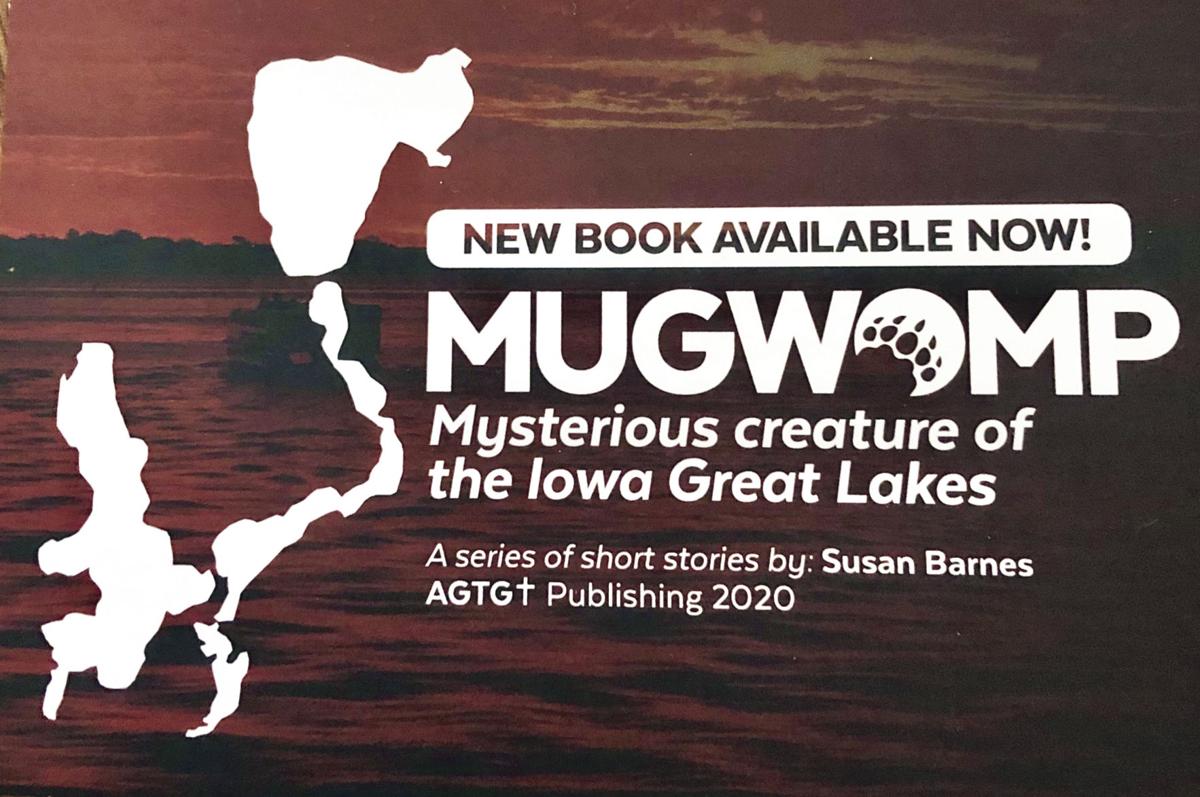 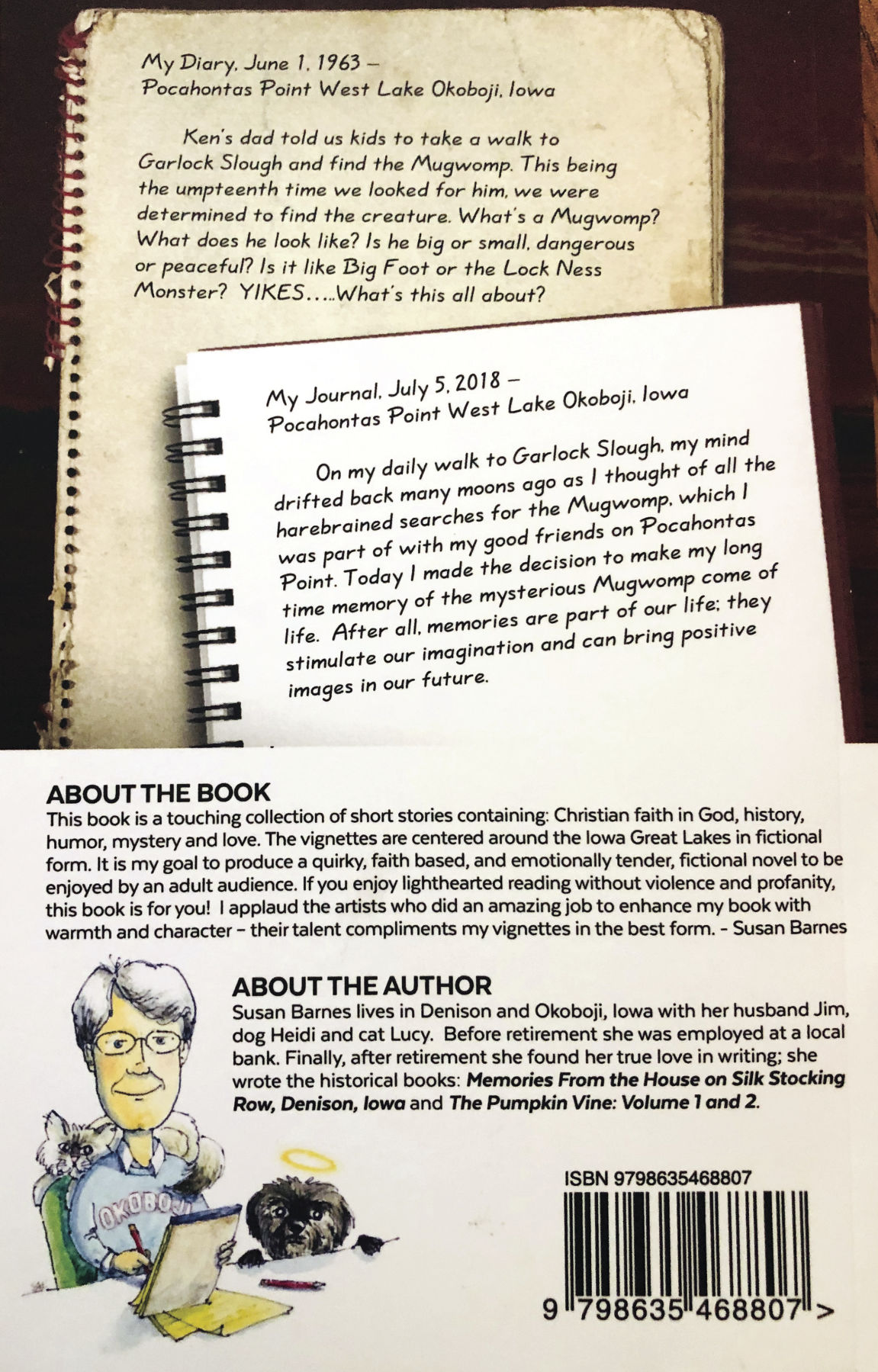 Nobody knows exactly what a mugwomp looks like, but Suzi Barnes can tell you that the mysterious creature is furry and mostly comes out at night.

Her new book, Mugwomp: Mysterious creature of the Iowa Great Lakes, aims to bring life to the beast she first heard about when she was a child.

“In the early 1960s, my parents and I would spend time at our lake home on Lake Okoboji,” Barnes said. “Right next door was a family with four kids about my age.”

Barnes didn’t have any siblings so her neighbors became something of an adopted family when she and her family visited the lake.

“We probably bothered their father quite a bit,” she said. “He liked to fish and we were on the dock, so he would get anxious for us to do something else.”

He would say, “Why don’t you kids walk down to Garlock Slough and find the mugwomp?”

Garlock Slough was about a half-mile from their houses on the lake.

“We were gullible, so we all marched down to Garlock Slough and we looked and we looked,” Barnes said. “All that we could find was frogs and turtles and Canadian geese.”

Her neighbors’ father would tell them, “Well, you’ll know it when you see it.”

“That was always a little game; we’d go down and try to find this mugwomp thing but we never really found out what he looked like,” she said. “It was just kind of a mystery.”

More than 50 years later, Barnes decided the mugwomp needed to be brought back to life.

“It was always in the back of my mind,” she said. “A few years ago I was walking down to the slough and I realized I’m not getting any younger and if that mugwomp is ever going to have a life I should probably do something about it myself.”

Barnes started working out what kinds of stories would help explain the creature.

The finished book is a collection of short stories that tell the tale of the mugwomp from many different perspectives.

“It took quite a while to get all the stories together,” Barnes said. “I tried to weave in old time history of the lake. If you know the history up there you’ll probably be able to figure out where the stories are located.”

Some of the characters that populate the book may be based on real people, but she didn’t use any real names.

“I tried to make up very fictitious names so they wouldn’t be recognizable,” she said.

The story begins in 1920 as a grandfather and his adult grandson go on a camping trip together.

“The grandpa was kind of hitting the hooch that night,” Barnes said.

He tells his grandson about growing up in New York in the 1800s and about the stories that First Nations people told about the mysterious mugwomp.

“I had some family roots out in New York and I thought that would maybe be a place for it to originate; maybe in the upstate of New York around the Thousand Islands,” Barnes said.

She knew about the major boat builders in that area that built speedboats and she decided to incorporate that detail into one of the stories.

“I know at least one, if not more, came to Okoboji in those early years because racing was a real hot thing back then,” she said

The next chapter takes place in 1928 in New York.

“That’s when some people went out to New York to visit some relatives and they went by train,” Barnes said.

The travelers took their belongings in large trunks; according to the story, the mugwomp may have traveled to Iowa in one of the trunks on the return trip – though it may have hidden in one of the speedboats.

“It leaves it open for your imagination as to how the mugwomp got to Okoboji,” she said.

One story later in the book features an abandoned cemetery.

“I came upon that quite by accident,” Barnes said. “I was searching for places that I could have some of these stories happen at and I came across this defunct cemetery at Spirit Lake.”

“Nobody seems to know why these people had to be moved or if in fact they were all moved,” she said. “It was probably one of the first, if not the first, cemetery up there because records show there was a little boy buried there in 1865.”

Another story is about a couple that goes to a dance at a dancehall at the lake on their anniversary; they decide to go out on the dock in the moonlight – and encounter the mugwomp.

“The mugwomp is mysterious throughout the book,” Barnes said. “It’s not really ever seen but you know it’s there.”

She said the mugwomp is not a bad creature but it frightens people because it is mysterious.

Her goal in writing the book was to give people a reason to smile.

“It’s funny in parts, its romantic in parts, it tells history in parts,” she said. “Everything is wound together. It’s an easy-read book, especially for these troubled times we’re in.”

The back of the book has a section of recipes for food featured in the stories – at least one of which requires frog legs.

Barnes said there is no profanity in the book. And no murders.

“The mugwomp’s been good,” she said.

Mugwomp: Mysterious creature of the Iowa Great Lakes is available from Amazon.com.

“Mugwomp: Mysterious creature of the Iowa Great Lakes” is also available at Thrifty White in Denison.

After robbing the Country Store in Denison at gunpoint on June 23, Nhial Kok Biliew is facing three felonies and one aggravated misdemeanor.

Kim Fineran, public health director for Crawford County, said in an email to the Denison Bulletin and Review this morning that a third Crawfor…

Convicted in Crawford County in 2006, man sentenced after illegally re-entering the U.S. and failing to register as a sex offender

William Noeli Santamaria-Rodriguez, a sex offender previously deported from the United States, illegally reentered the country and failed to r…

Education has always had to be flexible, providing students with skills for jobs that have not yet been created.

Ready for a surge: CCMH adjusts to COVID-19

The success of a Transitional Living Services house in Vail has shown that the services provided by such a facility are needed in the area.

Fireworks to take place on west side of Denison

This year’s Red, White & Boom Independence Day celebration will be a fireworks-only event that will take place on the west side of Denison…

St. Croix Hospice, an agency based in Oakdale, Minnesota, has opened an office at 40 North Main Street in Denison.

Smoother ride in store for main corridors to uptown Denison

The City of Denison will soon embark on a project that has been three or four years in the planning.