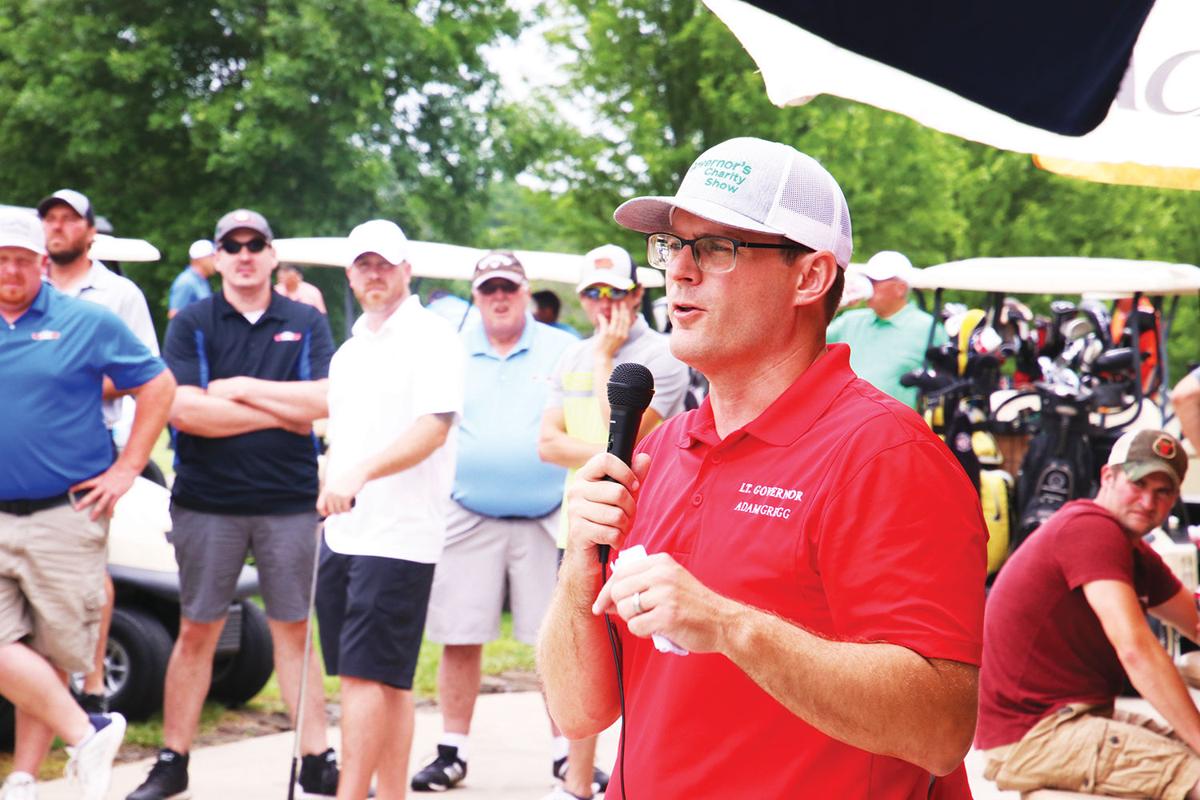 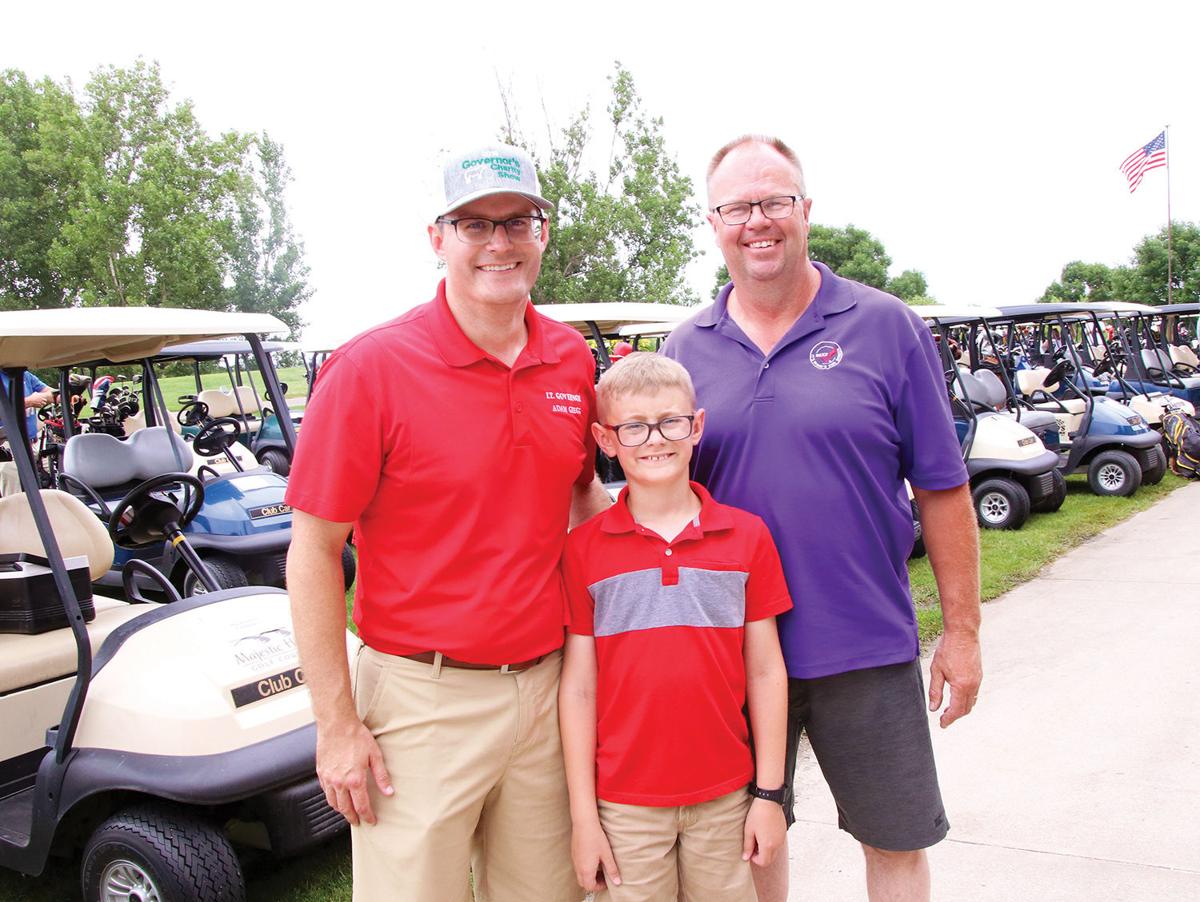 Lt. Gov. Adam Gregg (left) is pictured with his son, Jackson, and his father-in-law, Steve Rehder, of Hawarden. Photo by Gordon Wolf 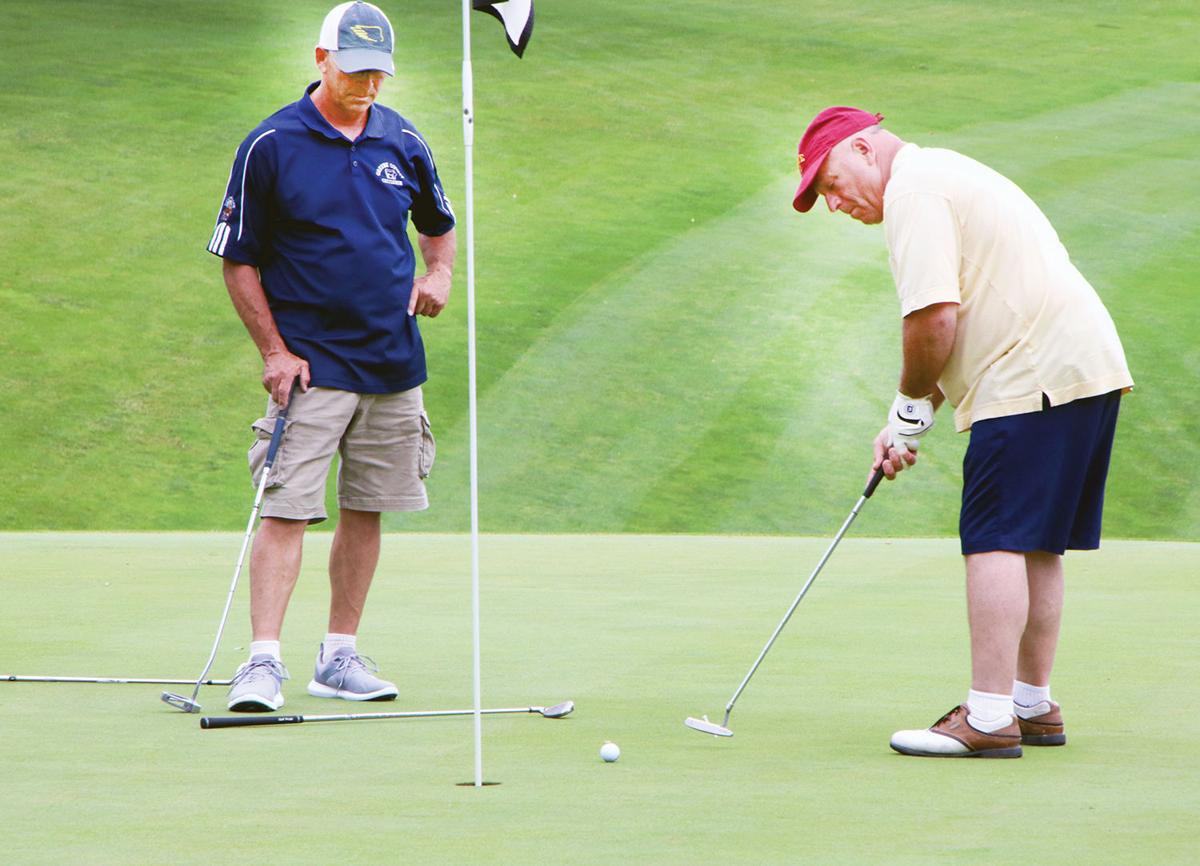 Jon Schaben (right), of Dunlap, taps the ball toward the cup during the Iowa Cattlemen’s Association Beef Master Open. On the green with him is Mick Towers, of Adel. 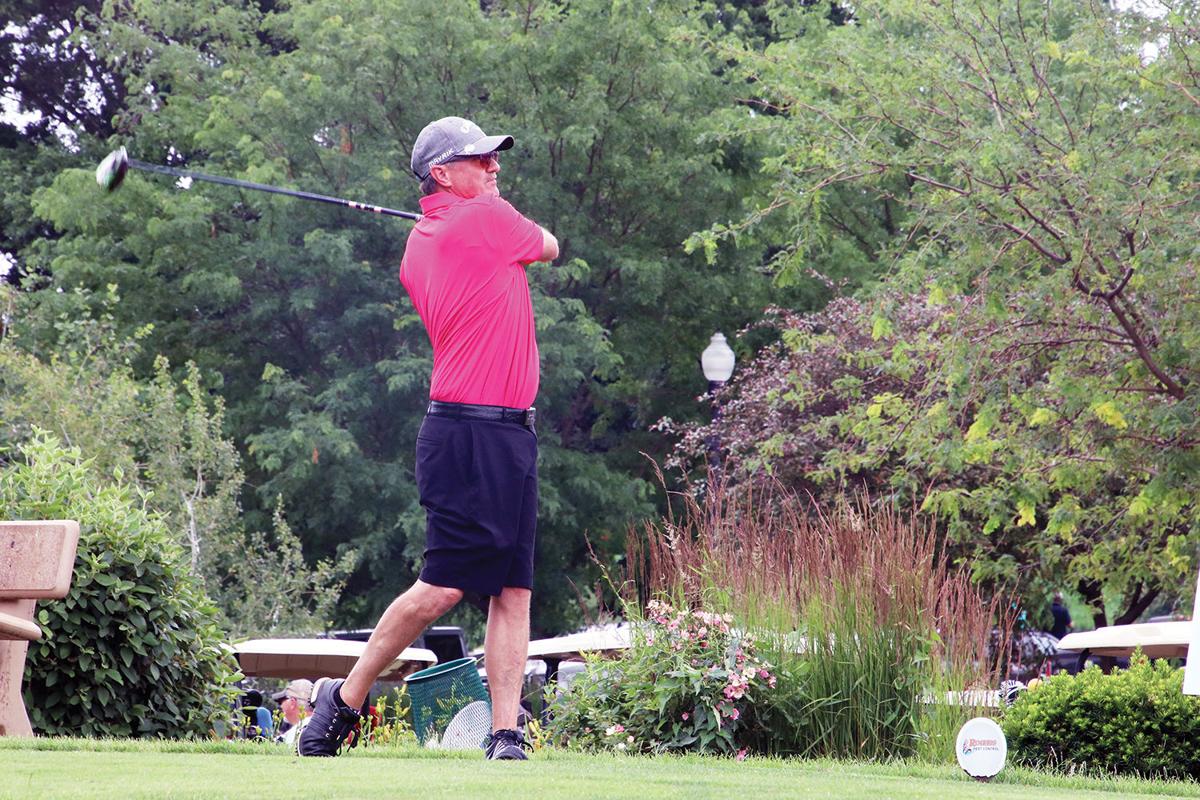 Roger Thenhaus, of Marshalltown, starts his round on Monday afternoon. 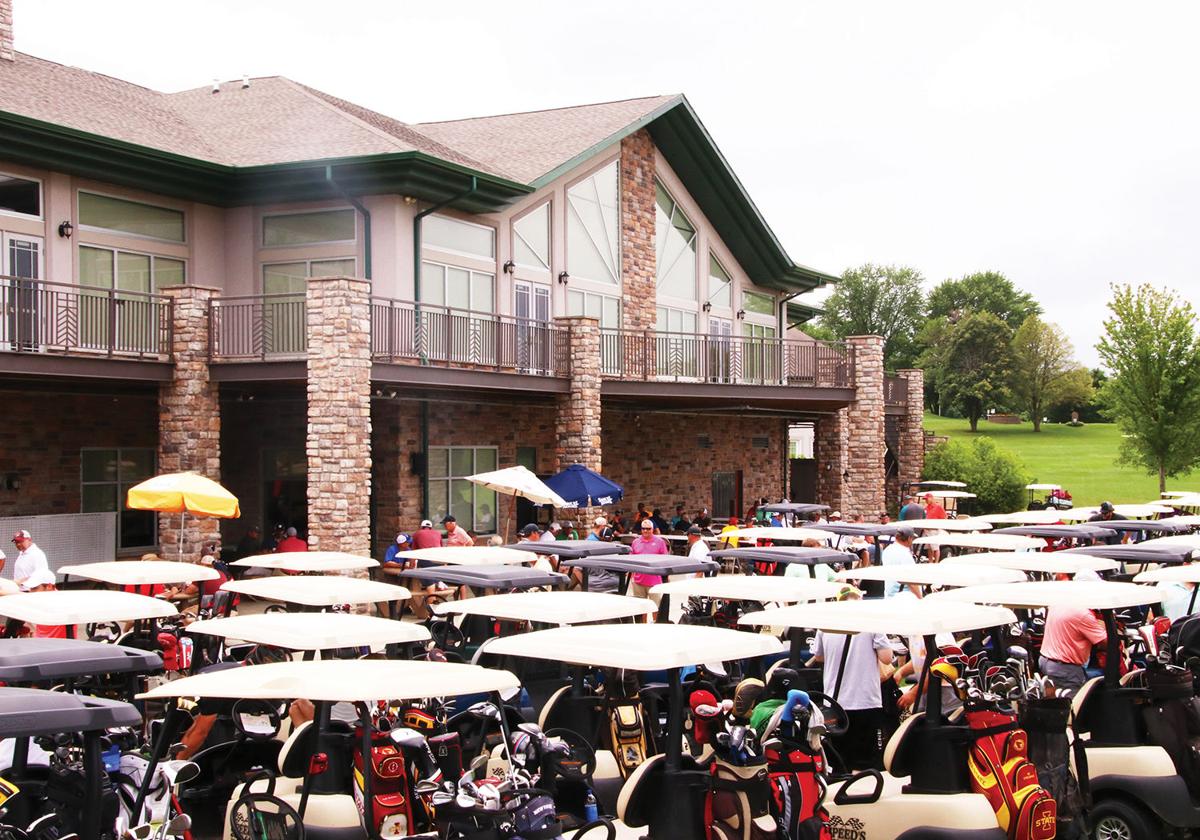 Golf carts line up behind Boulders Conference Center in Denison, ready for the afternoon round of the Iowa Cattlemen's Association Beef Masters Open at Majestic Hills Golf Course. 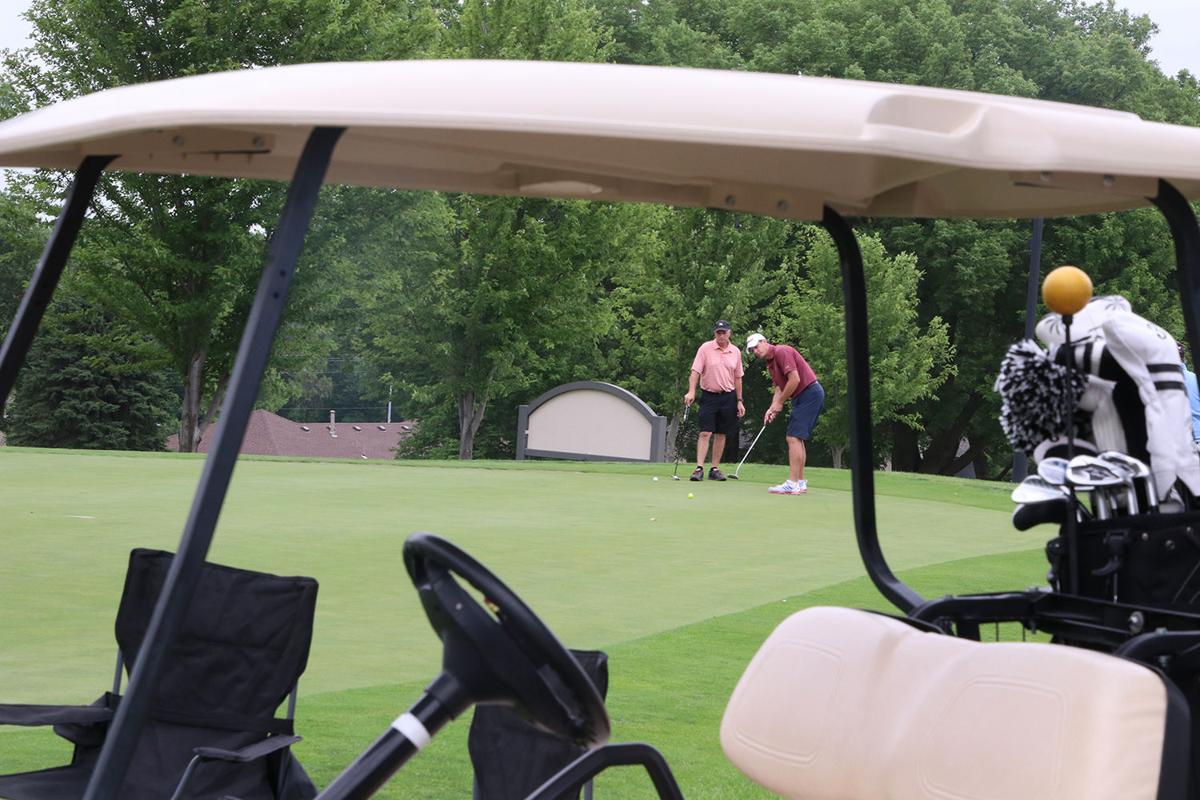 The 31st annual Iowa Beef Masters Open golf tournament at Majestic Hills Golf Course in Denison on Monday offered a day away from the farm for some and for others a day away from an agribusiness.

And although not on the farm, cattle producers weren’t very far away from the thought of the challenges they face, but they were also reminded how important their jobs are.

“If there is one thing that Iowans can certainly appreciate now is the important role that our cattlemen play in feeding the world, feeding Iowans and feeding our friends and neighbors,” Iowa Lt. Gov. Adam Gregg told the Denison Bulletin and Review.

“I think we also came to understand how delicate our supply chain is during this situation (the coronavirus pandemic),” Gregg added

Gregg was out on the links on Monday at the Beef Masters Open, which he said is a family tradition that goes back more than 10 years. Gregg plays with his father-in-law, Steve Rehder, a brother-in-law and a family friend. This year Gregg took along his nine-year-old son, Jackson.

Rehder, a cattle producer from Hawarden, is the immediate past chairperson of the Iowa Beef Industry Council, a position that Gregg’s grandfather, Glenn, held decades ago.

“It is nice to come, spend time with family, celebrate an industry that my family has been heavily involved in and have a little fun and say thank you to the cattlemen here today,” said Adam Gregg.

Glenn Gregg, who was also a cattle producer from Hawarden, died in August 2018 at age 93. Adam Gregg said his family is kind of out of the cattle business now but very proud of its ag heritage. The Rehder Family Farms, a Century Farm, is active in cattle and crop production.

Cora Fox, the director of government relations for the Iowa Cattlemen’s Association (ICA), pointed specifically to two challenges Iowa cattle producers are facing. One is transparency in pricing and the other is disparity in beef pricing margins during the coronavirus pandemic.

Fox said the ICA supports legislative measures that would require packers to purchase more cattle on the cash market.

She pointed out that captive markets (contracts) are more prevalent in the southern states because the cattle operations there are larger.

The legislation, called the 50/14 mandate, is designed to increase competition and transparency among meat packers who purchase livestock directly from independent producers. It would require that a minimum of 50 percent of a meat packer’s weekly volume of beef slaughter be purchased on the open or spot market, according to information in a release from Sen. Chuck Grassley, of Iowa.

The cattle would have to be delivered in 14 days.

The bill was introduced on March 12 by Grassley and Sens. Joni Ernst of Iowa, Jon Tester of Montana, Tina Smith of Minnesota, Mike Rounds of South Dakota, Cindy Hyde-Smith of Mississippi and Steve Daines of Montana.

To address the challenge of price disparity between boxed beef and the fed cattle price received by producers during the coronavirus pandemic, a number of elected officials have called for a Department of Justice investigation.

Grassley, President Donald Trump and Iowa Attorney General Tom Miller and attorneys general from 10 other states are among those who have made the request.

The ICA is supporting these requests and pointed out that fed cattle prices continued to decrease while boxed beef prices set and collected by packers increased. The ICA said this price spread burdened feedlot operators while the processing sector seems to be benefiting from the higher beef values.

“Gov. Reynolds and I are supportive of the work Sen. Grassley is doing at the federal level in regards to working with the Department of Justice, because it is so important that there be fairness in the industry and fairness in the marketplace,” Gregg told the Bulletin and Review. “A lot of that has to be done at the federal level but we’re supportive of those efforts.”

In a short talk given to the Beef Masters Open participants, Gregg said he was also pleased to be in Crawford County because of the number of Crawford County steers he has shown.

“Either by luck or tradition, the lieutenant governor often shows a Crawford County Steer at the Governor’s Charity Steer Show,” he said.

He proudly pointed out that he is the reigning champion. Last August, Gregg showed Charter Oak-native MaKia Smith’s steer, Richard, and they won the “Judge’s Choice” award.

Gregg had also shown Smith’s steer in the Governor’s Charity Steer Show in 2017; it was his first experience at showing a steer.

The next year he showed “Captain,” a steer raised by Luke Staley, also a Charter Oak native.

Reynolds, first as lieutenant governor and then as governor, showed Crawford County steers in 2014, 2015, 2016 and 2017 in the Governor’s Charity Steer Show.

Gregg said he hopes to show another Crawford County steer in the show this year.

Normally, the show and auction, which raises money for the Ronald McDonald Houses of Iowa, would be during the Iowa State Fair. This year, because the state fair is canceled, it will take place on August 15 at the Hansen Student Learning Center on the Iowa State University Campus.

“A lot has changed since last time we were together for the Beef Masters Open,” Gregg told participants at Monday’s golf tournament. “One of the things that’s changed and one of the things I hope more Iowans and more Americans have an understanding and appreciation of how important it is what you do every single day and the role you play in feeding Iowans, America and the world. Gov. Reynolds and I know important it is what you do and we just want to thank you.”

Lt. Gov. Adam Gregg (left) is pictured with his son, Jackson, and his father-in-law, Steve Rehder, of Hawarden. Photo by Gordon Wolf

Jon Schaben (right), of Dunlap, taps the ball toward the cup during the Iowa Cattlemen’s Association Beef Master Open. On the green with him is Mick Towers, of Adel.

Roger Thenhaus, of Marshalltown, starts his round on Monday afternoon.

Golf carts line up behind Boulders Conference Center in Denison, ready for the afternoon round of the Iowa Cattlemen's Association Beef Masters Open at Majestic Hills Golf Course.