Shari (Blunk) Brown, her husband, Brad, and Stella Grace before the winter weather arrived in Texas. 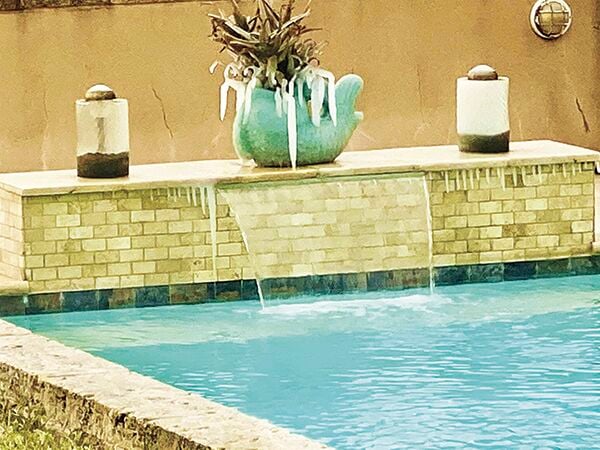 The ice on the Browns’ patio was not much by Iowa standards, but the result for Texas was quite severe. 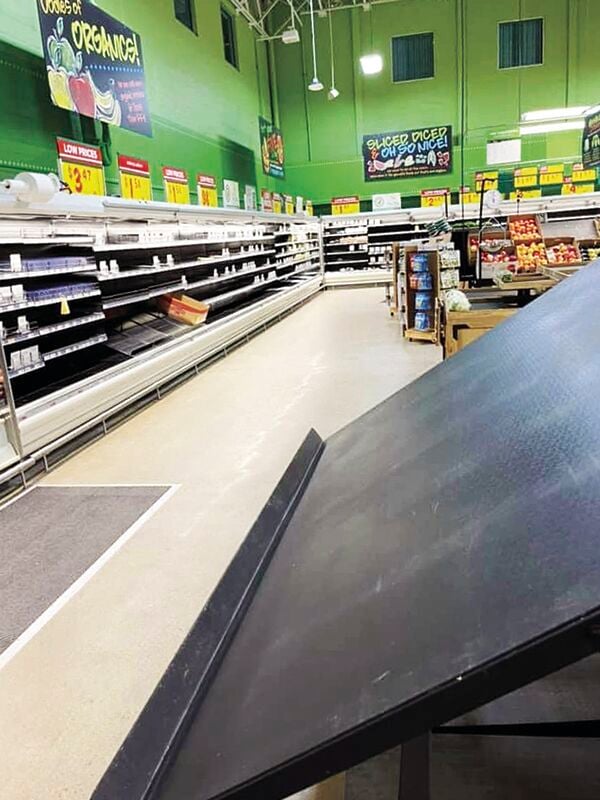 Many of the store shelves were empty due to a run on goods during the storm – and closed roads that prevented resupply. 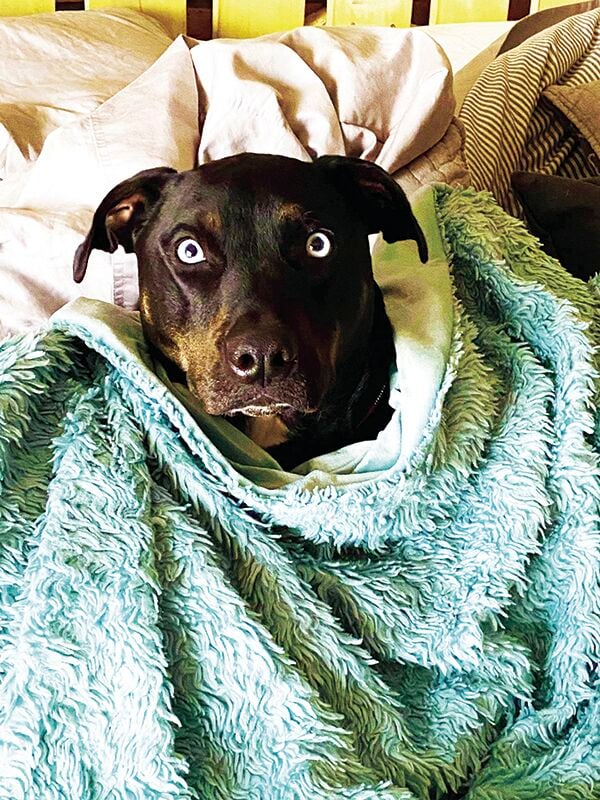 Stella Grace bundled up during the power outage.

“It started out with me, as always, the girl from Iowa excited about a chance for some flurries,” said Shari (Blunk) Brown.

She stayed up part of the night on Sunday into Monday taking pictures and shooting video of the light snow falling in the yard of her home that she shares with her husband, Brad, in Portland, Texas.

Shari grew up in Denison and is a graduate of the Denison High School class of 1981.

Portland is in south Texas, near Corpus Christi.

“It didn’t take long before things changed and it got a whole lot worse than what they thought it was going to be,” she said.

Temperatures dropped quickly and the snow turned to ice.

“We thought it was just going to flicker and come back on and it will pass,” she said.

When the power was still off later on Monday, they decided to plan for it staying off for a while.

“I know if you stay in a smaller environment it will stay warmer,” Shari said.

They arranged one room for everyone - the others were their dog and two cats.

“We were in there, layered in clothing, and thinking, okay we’ll get through this and tomorrow’s another day,” she said.

“It’s so dark at night, it’s like camping; you go to bed when the sun goes down and wake up freezing. It’s just like camping, except you’re in your house.”

She checked in with friends and family members as the outside temperature dropped to 18 degrees.

Although they didn’t have the problem in her house, some of her friends’ houses suffered burst pipes from the temperatures.

Water pipes in Texas aren’t insulated the way they are in Iowa, Shari said.

“Everybody has to drip their water outside and inside their homes and try to cover their faucets as much as possible,” she said. “A friend of mine took all the necessary precautions and she had a pipe burst in her ceiling yesterday.”

The water in her community has been off most of the time – and when it has been on, the water has to be boiled to be used.

Shari had some bottled water on hand, but not enough.

She re-learned how to make coffee without a Keurig while the power was out.

Towns in Texas aren’t prepared for the kind of weather that arrived this week, Shari said.

“The people don’t know what to do in that type of weather,” she said. “Our road situation is not good and they urge everybody to just stay home.”

She has lived in Portland since 1988 – and there has never been a weather event like this in all those years, she said.

“In 1983 they had a hard freeze and people talked about that time,” Shari said. “They said, ‘We made it through that, we can make it through this.’”

Texas is better-prepared for hurricanes, which has helped during the current emergency.

Many people stock extra supplies during hurricane season, but not during the winter.

“On the plus side, so many people here have generators because of the hurricanes,” she said. “You can walk outside and hear the generators going.”

She and Brad don’t own a generator – but that is something she plans to fix in the near future. At present, however, there are no generators for sale in the local area.

“All of the businesses were closed and a lot of them still are,” she said on Thursday morning.

The town is staying connected on a Facebook page that lists what is and isn’t open.

Many of the gas stations are out of gas and there are lines at the ones that are open because people need gas for their generators.

Propane supplies are also being rationed.

“But it’s so nice to see people helping people,” Shari said. “People are reaching out to strangers and their neighbors or elderly people who don’t have access to the internet or ways to get food and heat.”

People who have power have offered to let others come to their homes to warm up, heat a meal and charge their devices.

Shari and some of her friends have gathered warm clothes and blankets to give out to those in need.

“I have another friend who went around the streets to see if there were any animals that were out and got them to safety,” she said.

People fostered 85 dogs so they wouldn’t have to stay outside.

Supplies of items such as milk, eggs, bread, meat and toilet paper disappeared from the grocery store shelves right away, but the town organized a drive-through where people could pick up needed supplies.

Plumbers and others have offered their services to help those with broken pipes.

“It didn’t matter which side of politics you were on or what you believed in, everybody just helped each other,” Shari said. “It was nice to see that again for a change.”

The local grocery stores still don’t have many items because of lost food due to the loss of power and because trucks still haven’t been able to restock the stores.

“Our roads are closed, the causeway going to Corpus (Christi) is closed, the harbor bridge is closed; any kind of overpass is closed because of the ice,” she said.

The power came back on after 48 hours.

Shari said they didn’t have a thermometer that worked without electricity, but Brad thinks the house temperature got down to the mid-30s.

The temperature in the house was 42 degrees when the power came back on.

Shari said what she and Brad went through was a “so-called hardship,” because many others are truly struggling and hurting in Texas.

She hopes that life will return to normal by Monday for most people.

“I’m just counting down the days for it to come to our normal temperatures again and people can go back to their own way of life - and hopefully be thankful and remember this time,” Shari said.

“Meanwhile, I’m still all bundled up in the house with layers of coats on. I’ve got a hat on, I’ve got my gloves on, and the temperature is still at 54, which is much better than what it has been.”

Update: On Tuesday a preliminary hearing was set for 11 a.m. on March 2.

Craig Bergman was interested in science while growing up, but he never expected to make a career of it.

At a public hearing on the matter on Monday afternoon, the Crawford County Memorial Hospital (CCMH) Board of Trustees voted to reduce the hosp…

The two-week COVID-19 positive case rate at Crawford County Memorial Hospital (CCMH) was 11.6% on Thursday morning, which was up slightly from…

Shari (Blunk) Brown, her husband, Brad, and Stella Grace before the winter weather arrived in Texas.

The ice on the Browns’ patio was not much by Iowa standards, but the result for Texas was quite severe.

Many of the store shelves were empty due to a run on goods during the storm – and closed roads that prevented resupply.

Stella Grace bundled up during the power outage.