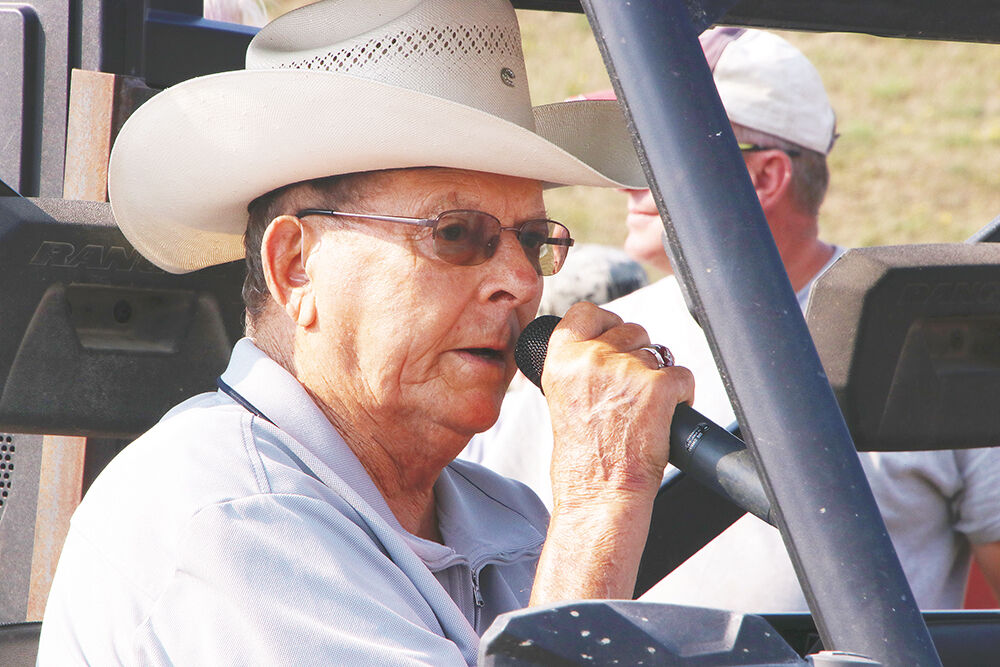 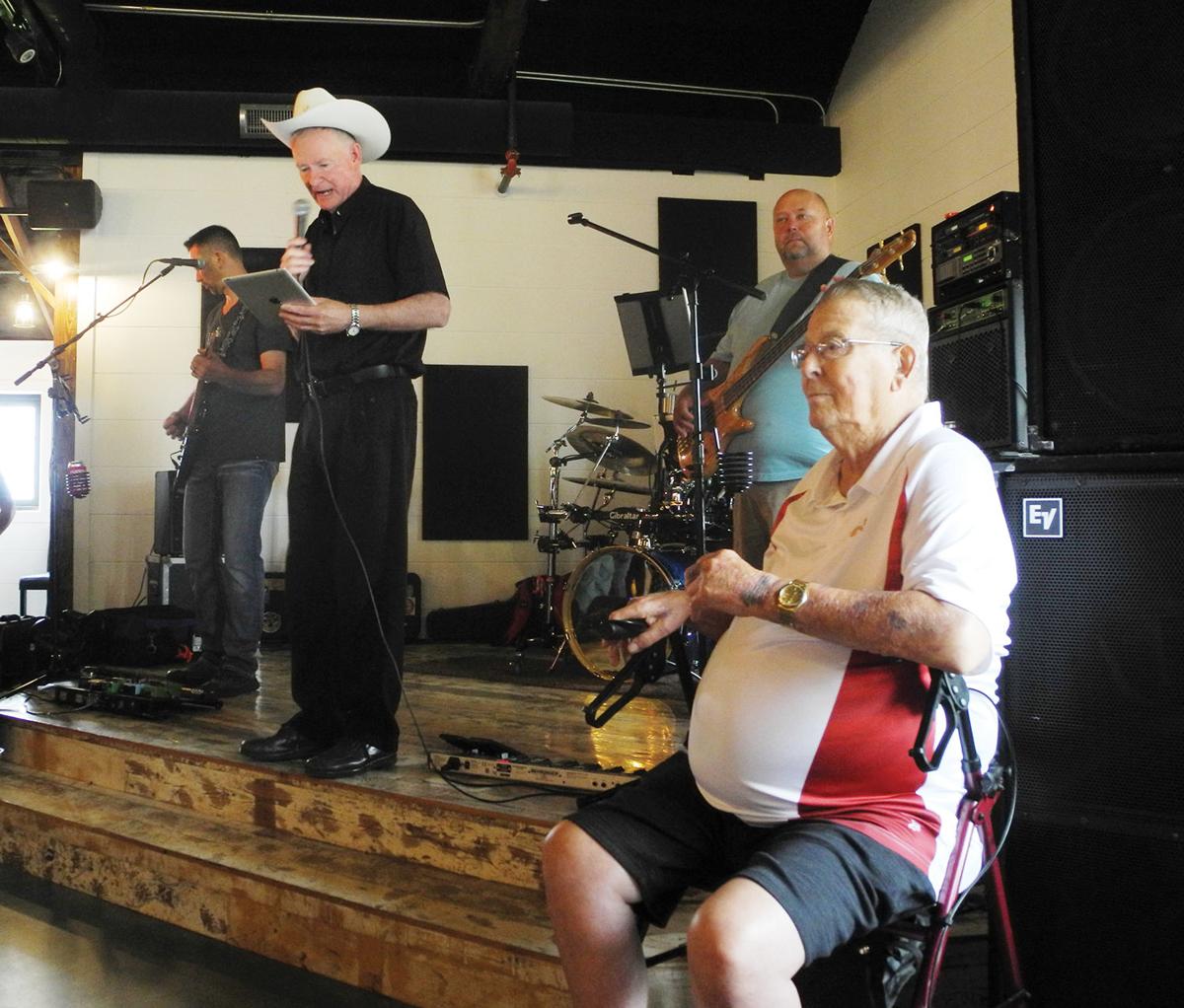 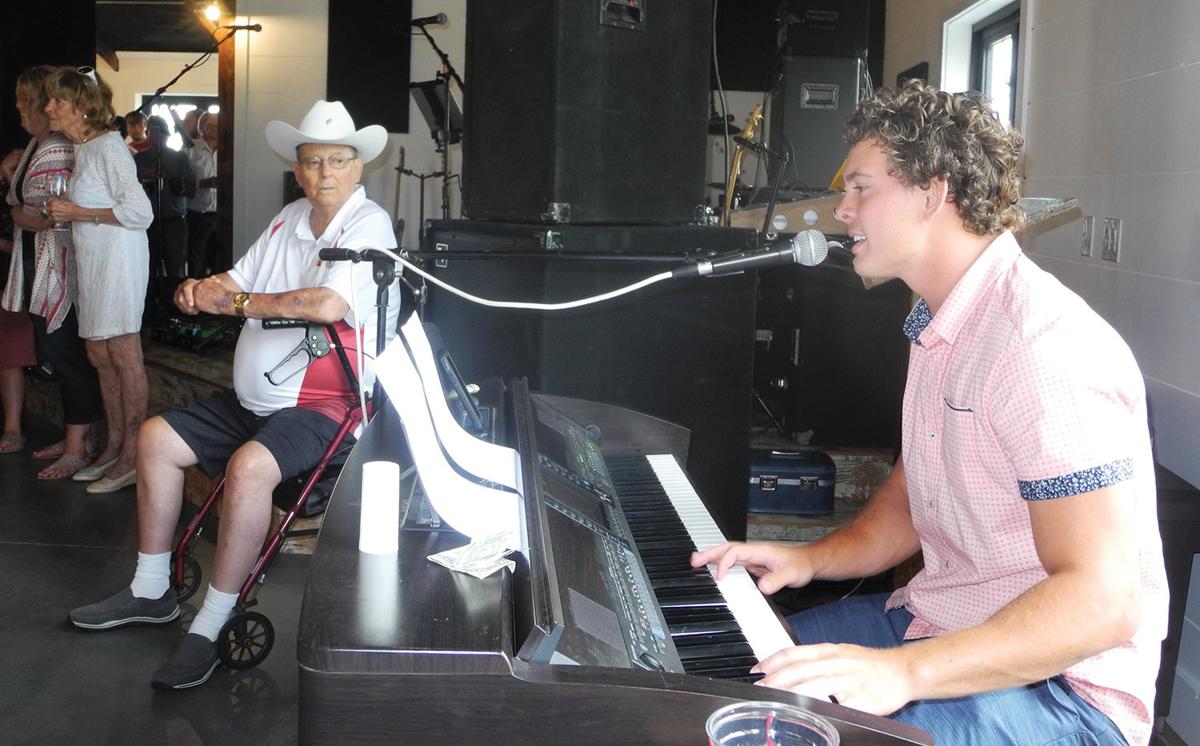 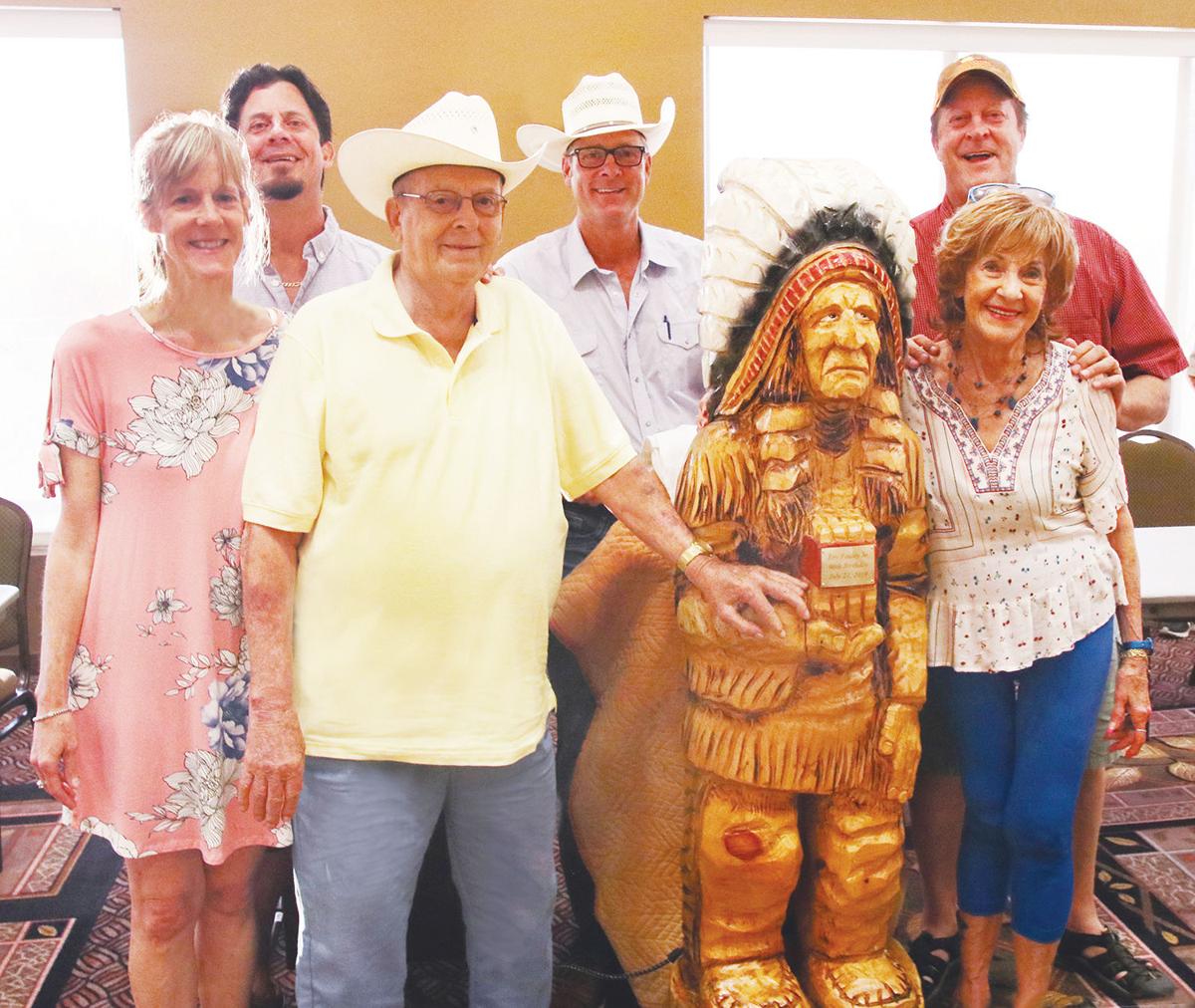 The Western Iowa Feeder Cattle Producers organization honored Erv Pauley with Denison Livestock Auction on Thursday, July 11, by presenting him with an American Indian carving. The carving was given in honor of Pauley’s 90th birthday, which will be on Sunday, July 21, and for the more than 40 years that he has owned Denison Livestock Auction. Pauley began working for the livestock auction as a teenager and purchased it in the mid-1970s. Pictured above are Erv and Themla Pauley and their children, Maria Muhlbauer, John Pauley, Tom Pauley and JR Pauley. The carving was presented at the Western Iowa Feeder Cattle Producers annual banquet. Photo by Gordon Wolf 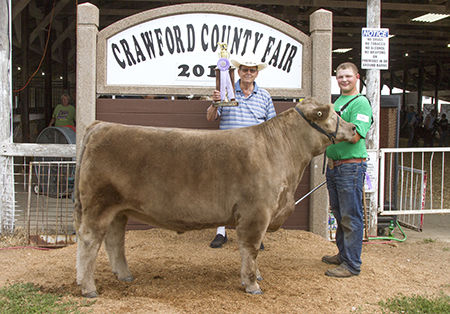 Trophy sponsor Erv Pauley with Denison Livestock Auction, Cody Von Glan and his reserve champion steer, which is being sponsored to the GCSS by the Iowa Cattlemen’s Association and the Iowa Beef Industry Council. Photo by Dan Mundt

Erv Pauley spent a lifetime doing what he loved.

He loved working with livestock, especially marketing them the auction way.

He began when he was 15 years old, selling at the livestock auction in Denison, which he would purchase years later, in 1977. His last time to auction was when he sold miscellaneous items on the Saturday, September 12, auction, at age 91 and a couple months.

On Sunday, October 11, he succumbed to illness. He leaves behind a number of legacies – devotion to family, running a successful business, giving back to the community and always giving a friendly welcome to people.

“The thing about Erv is the family,” said Brad Nelson, an attorney in Denison who has known the Pauley family for decades. “It’s amazing how close knit that family is, but they also make everybody feel like family.

“I have had Easter dinner, Thanksgiving dinner and Christmas dinner with them,” Nelson added. “When I’ve had hard times, Erv and the family are there. They will help anybody, and the door is always open at the Pauley house, and if you’re driving by, you’re almost expected to stop.”

Nelson said that was just part of Erv’s personality.

“He never met anybody he didn’t like. He never judged anybody. He took everybody as they were. If you needed a hand, he’d give you one. It made no difference what walk of life you were in or where you were from,” Nelson said.

Jim Schaben, Jr. remembers Erv from when he worked for his father, Jim Schaben Sr., at Dunlap Livestock Auction.

“I’ve known Erv my whole life,” said Jim Jr. “He was an auctioneer at our livestock auction when I was a kid in the 1960s, and he was quite a guy.

“Erv was a great guy and certainly an enjoyment for anybody to be with. He was the center of activity,” he added.

“They both had their hearts in the livestock business, and the auction business was successful for both of them. They enjoyed it and made a lot of friends,” Jim Jr. continued.

Erv worked for Dunlap Livestock Auction for 25 years, according to a 2008 Denison Bulletin and Review article that told how the Shelby County Cattlemen’s Association recognized Jim Sr. and his wife, Ruth, and Erv, and his wife, Thelma, with Lifetime Achievement awards.

The same article told how Erv was 15 years old when he started working at the Denison location, then owned by Rodney North.

“I taught myself the business,” Erv said in the article. “It involves more than calling numbers. You really have to know the market and how much livestock is worth at the time you are auctioning it for your customer.”

Erv gave others the opportunity to start in the livestock auction business at a young age. One of the young employees was Clint Von Glan, who is now a cattle producer from rural Vail.

Von Glan worked for Denison Livestock Auction on Saturdays, beginning in his junior year at Ar-We-Va High School. He would chase cattle back to the pens after they went through the auction ring, put ear tags on pigs and do any number of other jobs.

“There was a nice group of guys to work with. It was the hottest place in summer and the coldest place in the winter, but the people were good to work with,” Von Glan said.

It was actually Tom Pauley, one of Erv’s sons, who interviewed Von Glan for the job, but it was clear that Erv was his boss.

“Erv would always ask how everything was going,” said Von Glan. “If you had a concern, he wanted to listen. If something wasn’t right, he would let you know, too.”

As a person involved in the Crawford County Cattlemen’s Association, Von Glan would always see Erv at the annual banquet or the membership kick off.

“He didn’t miss many of those,” he said.

Tom Gustafson, also an attorney, came to Denison 45 years ago and met Erv and Thelma nearly right away.

“Erv was always so friendly, so easy to meet,” Gustafson said. “You couldn’t be in the same room with Erv without meeting him and knowing him.

“He was one of those people, throughout the entire time that I knew Erv, he called me ‘Tommy,’ and that always stuck. That was just Erv’s way of being friendly, and I always considered a sign that he liked me and he thought of me as a friend, and to me, that was extremely special.”

Gustafson also witnessed Erv’s friendliness toward others and his willingness to help others.

“I’m not sure there would be anybody in this world I would think more likely to do whatever he could to help you than Erv. If a person needed help, he was the person that was going to come forward. You could always count on Erv and his family.”

Gustafson said Erv’s personality operated on a pretty even keel and that he was always mild mannered to him and always polite.

“He and Thelma were the perfect pair, I always thought. They complemented each other very nicely,” he said.

Erv and Thelma celebrated their 66th wedding anniversary on August 25 by doing something they always enjoyed. Thelma was working in the Farmers Café at the livestock auction and Erv was outside calling bids at the annual fall consignment sale.

Although Erv had health issues in the recent past, it was remarkable how active he remained well into the latter years of his life, down at the sale barn, doing auctions, which was a real gift, Gustafson added.

“I was always amazed to see that and how well and long into his life he could remember names,” he continued. “That’s probably kind of an occupational deal. He always knew people’s names. It always amazed me. You’d go to a wedding reception or something like that, and there wasn’t a soul in the room he didn’t know by their first name.”

“He wasn’t trying to sell you something or be nice to you because maybe you could do something for him in the future. He was just nice because he was nice. And that kind of is a rare commodity any more, but that was the way he was. He will be missed.”

Helping the community is something that Gustafson, Von Glan and Nelson also will remember about Erv.

‘If he saw something that needed help financially, he was there with a helping hand. He was really good with the community aspect,” said Von Glan.

He added that Erv and his sons spent a lot of time donating their auctioneering services for fundraisers.

“You can’t count the number of fundraising auctions the Pauley family has done with no pay,” said Nelson.

He added that he never saw Erv get angry or upset.

“He was genuinely a nice person, and the family is, too. He made that mindset or the family setting. Everybody in the family has learned that and they take it to heart. It’s the true family mentality,” Nelson said. “Generation after generation. Not just Erv. He taught them all, and they all learned a lesson – the kids, grandchildren and great-grandkids.

“He will be missed.”

“I can barely go a day without walking around Denison and having someone ask me the exact phrase, ‘How’s that house coming along?’” said Ken Kahl.

Meeting in special session on Monday, the Denison City Council discussed the need for adding a street commissioner to the Public Works Department.

Many in the county were surprised to hear of the death of Dan Muhlbauer, of Manilla, on Thursday.

The Western Iowa Feeder Cattle Producers organization honored Erv Pauley with Denison Livestock Auction on Thursday, July 11, by presenting him with an American Indian carving. The carving was given in honor of Pauley’s 90th birthday, which will be on Sunday, July 21, and for the more than 40 years that he has owned Denison Livestock Auction. Pauley began working for the livestock auction as a teenager and purchased it in the mid-1970s. Pictured above are Erv and Themla Pauley and their children, Maria Muhlbauer, John Pauley, Tom Pauley and JR Pauley. The carving was presented at the Western Iowa Feeder Cattle Producers annual banquet. Photo by Gordon Wolf

Trophy sponsor Erv Pauley with Denison Livestock Auction, Cody Von Glan and his reserve champion steer, which is being sponsored to the GCSS by the Iowa Cattlemen’s Association and the Iowa Beef Industry Council. Photo by Dan Mundt