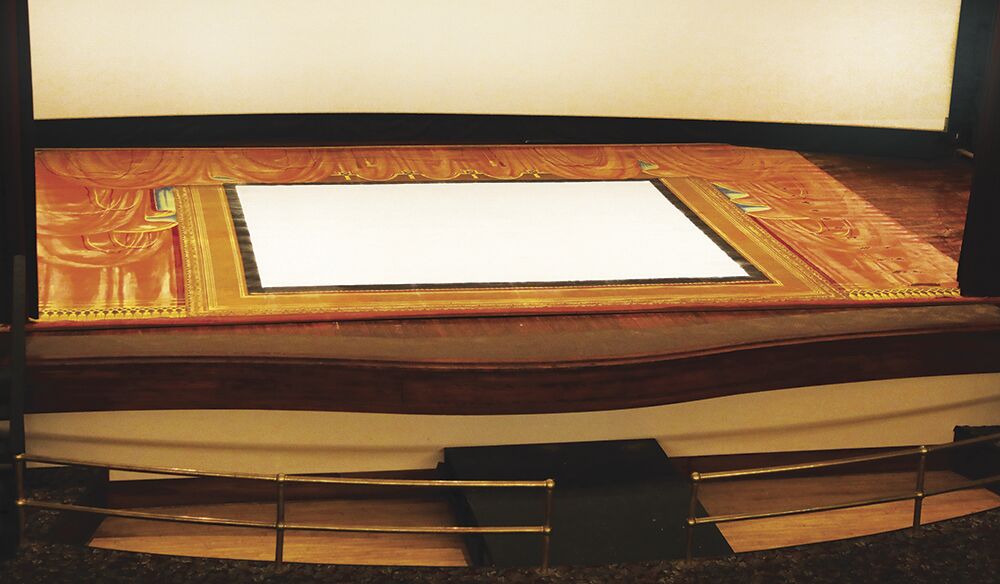 This movie screen, which is on the stage at the Donna Reed Theater, was the original screen used in the theater during the silent film era. It was rediscovered in the basement of the theater nearly two decades ago, and will soon be hung at the back of the stage so it may be shown to visitors. Photo by Dan Mundt 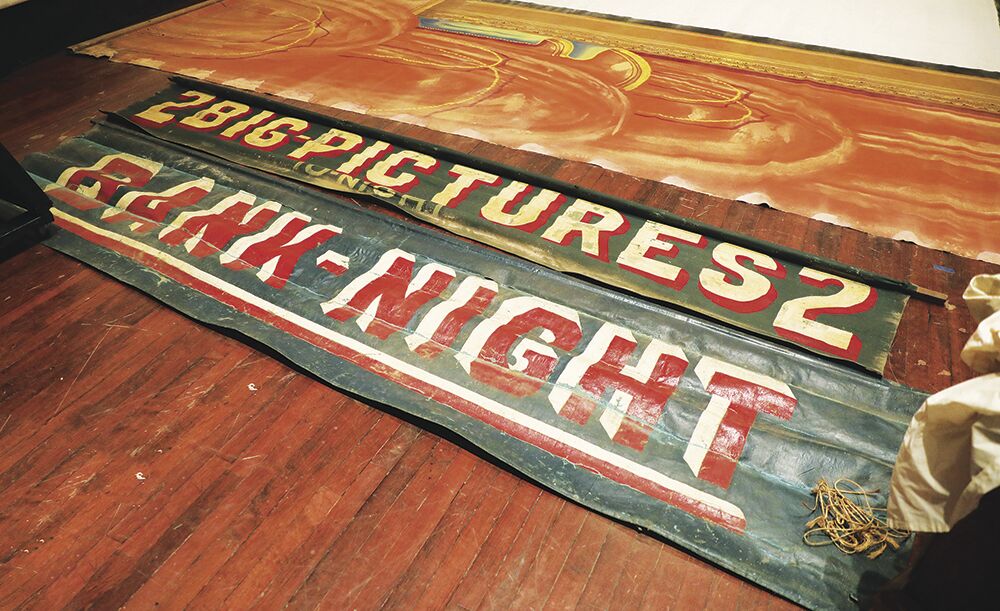 These banners were used to promote “Bank Night,” a lottery promotion designed to draw movie patrons to what was then the Ritz Theater in the 1940s and 1950s. Photo by Dan Mundt

A backdrop/projection screen that has been stored for many years – perhaps close to 100 – was brought onto the stage at the Donna Reed Theater last week.

Nathan Mahrt, a Donna Reed Foundation volunteer, plans to return the screen to its position above the stage; he thinks it may have last been placed there 90 or more years ago.

The screen, which has a large white area in the center, was used for the projection of silent movies; it came from the original Germania Opera House, which is now the West Iowa Martial Arts/Neu Fit building on First Avenue North.

“The proscenium is still in that building; it’s behind a wall,” Mahrt said. “If you measure that proscenium and the arch, that curtain fits it exactly.”

The screen was moved to the new German Opera House that was built in 1914 and is now the Donna Reed Theater.

From the information that Mahrt has been able to gather, the screen was made 20 to 25 years earlier.

“Guessing on the style it is, I’m thinking it was probably made in the early- to mid-1890s,” he said. “That’s a guess based on other ones I’ve found on the internet.”

Mahrt has looked through the original opera house meeting minutes and found a mention of “the old backdrop” but nothing else.

“I don’t know when they switched to a new screen or a new backdrop, but they used it for silent movies for quite a while,” he said.

“There are two simplex projectors (a film projector) up in storage in the balcony area and, according to the serial numbers, they’re (from the) late ‘20s. I think this thing was retired before that.”

Mahrt and the late Roy Voggesser, who provided building maintenance at the theater for many years, found the screen around 2002.

“It was in the basement under some ductwork,” Mahrt said.

The screen was wrapped in a cloth cover and left on the dirt floor that still exists under part of the theater building.

“It’s actually in remarkable shape for being that old,” he said. “On one side, it’s tattered. There are holes from where moisture from the dirt floor penetrated the cloth wrapping.”

Mahrt said the plan is to have the screen restored and placed behind the stage at the theater.

“We want to hang it to show the progression of the theater,” he said.

“When we give tours we can explain it was the original screen.”

Along with that explanation visitors will also be told about how a piano player performed along with silent films to help bring them to life.

Mahrt noted that in his search through the opera house minutes, he discovered that John Fastje, who owned and operated Fastje Furniture in Denison for many years, was also one of the silent film piano players.

Two old banners, proclaiming “Bank Night” at the theater, were also discovered in the basement.

“They were used to big (attendance) numbers at the movies in the ‘30s because people were looking for an escape, but in the ‘40s and ‘50s, it really kind of declined,” he said.

One solution was to have “bank nights” at which attendees could win a lottery based on ticket or seat numbers.

He said the plan is to “hang the banners so people can see them.”

The theater’s original Greek backdrops, which appeared in many older high school photos, are in storage locally and could also be returned to the theater to help show the changes over the decades, Mahrt said.

Mahrt, who is the industrial technology teacher at Denison High School, has his “World of Construction” class working at the theater.

“We’re doing a bunch of stuff at the theater to winterize and clean – basically Roy’s (Voggesser) checklist that he didn’t get to do,” he said. “We’re going through, checking boxes and fixing windows he always wanted fixed.”

Mahrt and others are also working on the theater’s sound system and projection booth.

He said a generation has already lost the experience of going to see a movie there.

Mahrt plans to have the work on the screen and sound system complete in time to show classic horror films, such as “The Creature from the Black Lagoon,” for the Halloween season.

He would also like to show “Planes, Trains and Automobiles” at the theater in November.

At Home Design settles in at new location

Frontier Road to DHS to be connected

CCMH COVID positivity surges to 30%; some staff members out

Rick Nelson, left, and Larry Kloewer, of the Crawford County Secondary Road Department, pose with a large tree they removed from 240th Street …

Everything on the table as far as location, amenities

Mass of Christian Burial for Lois Anne Houston, 95, of Denison, will be conducted at 10 a.m. Monday, January 17, at St. Rose of Lima Catholic …

COVID: HOSPITALIZATIONS AT ALL TIME HIGH

Pelosi: More needs to be done after Biden's year

Pelosi: More needs to be done after Biden's year

This movie screen, which is on the stage at the Donna Reed Theater, was the original screen used in the theater during the silent film era. It was rediscovered in the basement of the theater nearly two decades ago, and will soon be hung at the back of the stage so it may be shown to visitors. Photo by Dan Mundt

These banners were used to promote “Bank Night,” a lottery promotion designed to draw movie patrons to what was then the Ritz Theater in the 1940s and 1950s. Photo by Dan Mundt