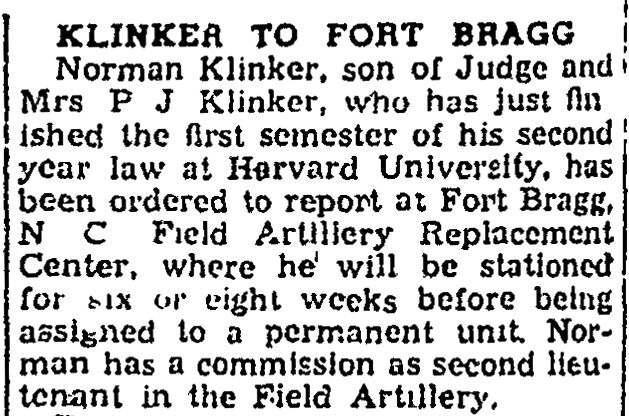 Last week was “Scout Week” across the United States.

As part of a story on that subject, the Bulletin and Review noted that Norman Klinker was the first Eagle Scout in Denison and that he was killed in World War II.

See the Tuesday Denison Bulletin for part 1 of his story.

In June 1943, Norman wrote to his parents about his unit’s part in the fighting in Tunisia.

“The big parade was about to begin. We went through Beja and took positions in the hills to the east,” he wrote. “I was now an executive of a firing battery—the man who ‘shoots’ the guns.”

The American soldiers were “young fighters” at that point and he worried whether they would be able to keep up with the British.

“We moved our artillery to forward positions in the middle of the night, laid our guns and waited,” Norman wrote. “At 2:00 o’clock we opened up with harassing fire on the enemy positions. At four we poured it out as fast as we could for the attack; and at six the last high ground was ours. Then our tanks rolled up the valley with the artillery rolling along with them. We leaped from position to position knocking out the ‘tough spots’.”

During the last phase of the battle, German soldiers were in “every bush and hill” – but Norman said the fight had been taken out of them.

“They hadn’t the stuff to take it!” he wrote. “These supermen were done!”

Norman said he did not want his account to seem that he was “blowing out a lot of steam.”

“Was I brave? Not in the least. Was I scared? Yes, at times scared stiff,” he wrote. “Anyone who brags about what he has done in combat so daringly, or about how brave he was, has never been in the front lines. After you have been face to face with the enemy, you never feel like talking big.”

Norman said none of the soldiers had thoughts of bravery during the fighting.

“He goes because the job has to be done and he is the man that has to do it,” he wrote.

While he was Africa in 1943, Norman exchanged letters with his Denison High School classmate, Donna Reed.

Reed exchanged letters with many servicemen during the war.

In a letter dated “April 12th, I think” Norman wrote, “Have just received your letter from the eighth of December. And believe me or no, it was the first piece of mail I have received in the past two months.

“Tough and bloody and dirty as it is at times, there is none of that grim and worried feeling so rampant in war pictures,” he wrote. “It’s a matter-of-fact life we live and talk here. And here for the first time no one has the ‘jitters.’”

Norman wrote that he had heard Donna had “done your part and done got married. Congratulations and good luck! See you in your next ‘pic.’”

An image of one of Norman’s letters was one of several that Donna’s daughter, Mary Owen, provided to the Donna Reed Foundation (DRF) and was featured in a 2012 DRF exhibit of her wartime letters called “Dear Donna.”

The August 5, 1943, Denison Bulletin included the text of another letter Norman wrote to his parents telling of the invasion of Sicily..

“The Nazi supermen didn’t have the ‘guts’ to hold out like the British did at Dunkirk,” he wrote. “During the campaign, hundreds and hundreds of Germans came over to our lines. They were not the dashing, smart Nazis you think of, but bedraggled ‘Dutchy’ old German farmers. Not the cold, proud warrior, but bewildered, friendly human beings. I still keep wondering how, why were these people, salt of the earth, sucked into this knavery?”

Norman said that while the Germans were on the other side of the line, the Americans tried to smash every one of them.

“But when they came to us we were as friendly as could be, giving them cigarettes and food. You cannot be otherwise,” Norman wrote. “No matter what devils we humans are, we are angels too. No matter what we say or do, we are still brothers.”

It was not reported at the time, but Norman suffered a head wound in Sicily and spent several weeks in a hospital, according to a later Review story.

On December 30, 1943, the Bulletin reported that “Judge and Mrs. P.J. Klinker received a cablegram Wednesday evening at 11 o’clock, from their son Lt. Norman Klinker, sent from South Italy, and saying, he was enjoying good health and therefore feeling fine, and wishing them greetings of the season. Of course, they were elated to receive the good news, and we are sure friends of the lieutenant will be equally pleased.”

Norman died a week after the letter was printed, though the news would not reach Denison for another two weeks.

“Lt. Norman Klinker, 25, only son of Judge and Mrs. P J Klinker of Denison, was reported killed in action in the Italian theatre of war Jan. 6, according to a war department telegram the family received here Friday evening at 7 o’clock,” the January 27, 1944, Bulletin reported.

“Shortly before Christmas, 1942, Lieutenant Klinker landed with American troops at Casablanca, North Africa and participated in the major drives. Following about a month’s stay in the Casablanca area where he supervised unloading of supplies, he asked for transfer to the second army division on the lines while stationed at Rabat, capital of Morocco. Action at Tebessa, Algeria, near Kasserine, was next on his itinerary and he experienced the discomfiture of incessant rains while in action at Gafsa where his unit took 450 Italian prisoners. His field artillery section played an important part in the fall of Maknassy and the final cleaning-up of axis forces in North Africa.”

“I personally considered him to be a superior officer and one whom I considered privileged to have in my command,” Lt. Col. J.W. McPheeters wrote to Norman’s parents. “He was assigned the duties of Battalion Forward Observer - a duty of great responsibility, and one requiring a tremendous amount of courage, aggressiveness, perseverance and devotion to duty. Norman had all of these qualities and, as a result, he never once failed to perform well an assignment that was given him. It was while he was on one such assignment that he met his death. There was no pain, no lingering, and I’m certain that he was prepared to meet his God. It came as a distinct shock to all of us and his loss is deeply felt.”

Nathan Mahrt, of Denison, is in possession of the letter from McPheeters, and shared it with the Bulletin and Review.

Robert Crossley, publisher and managing editor of the Review during the war, wrote that Norman’s war record was “second to none among the boys from Crawford County” who went to fight the Nazis in the Mediterranean.

“Lieutenant Klinker made the same sacrifice made by nearly a score of other young men from this county,” Crossley wrote in the January 27, 1944, Review.

“War is and can be no respector of persons, but the finger of fate that pointed out Norman Klinker to an enemy shell, pointed also to the extreme folly of war, the waste and destruction of the best young manhood that a civilized world has been able to breed, rear, and educate.”

Crossley noted that in one of his earliest letters, in which he wrote enthusiastically about his time with an armored division, “a hell on wheels” as he called it, Norman also added, “And yet, Dad, you know, after seeing and experiencing all this, I’ll still always be a pacifist.”

“This afterthought was never published, because Judge Klinker was afraid it might be misunderstood,” Crossley wrote. “Today, we’re publishing it, because we think Lieutenant Klinker has earned the peace he believed in up to the ultimate sacrifice that belief demanded.”

Judge Klinker, who was born in Germany in 1877, died of a heart attack a week after receiving news of his son’s death.

“An impressive and fitting memorial service,” was conducted for Norman at the Methodist church in Lake View on February 6, 1944, according to the Bulletin.

“Dr. Baddeley, pastor, was assisted by the local American Legion post in carrying out a tribute to this young man who spent several summers here at the home of his parents at Denison Beach,” the Bulletin reported.

“Miss Patricia Wight of Kingston, N.Y. arrived last week for a visit with Mrs. P. J. Klinker and daughter, Anna May, who spent several days in their home here,” the August 17, 1944, Bulletin reported.

“Miss Wight was a friend of the late Lt. Norman Klinker.”

Update: On Tuesday a preliminary hearing was set for 11 a.m. on March 2.

Craig Bergman was interested in science while growing up, but he never expected to make a career of it.

“It started out with me, as always, the girl from Iowa excited about a chance for some flurries,” said Shari (Blunk) Brown.

The two-week COVID-19 positive case rate at Crawford County Memorial Hospital (CCMH) was 11.6% on Thursday morning, which was up slightly from…

At a public hearing on the matter on Monday afternoon, the Crawford County Memorial Hospital (CCMH) Board of Trustees voted to reduce the hosp…