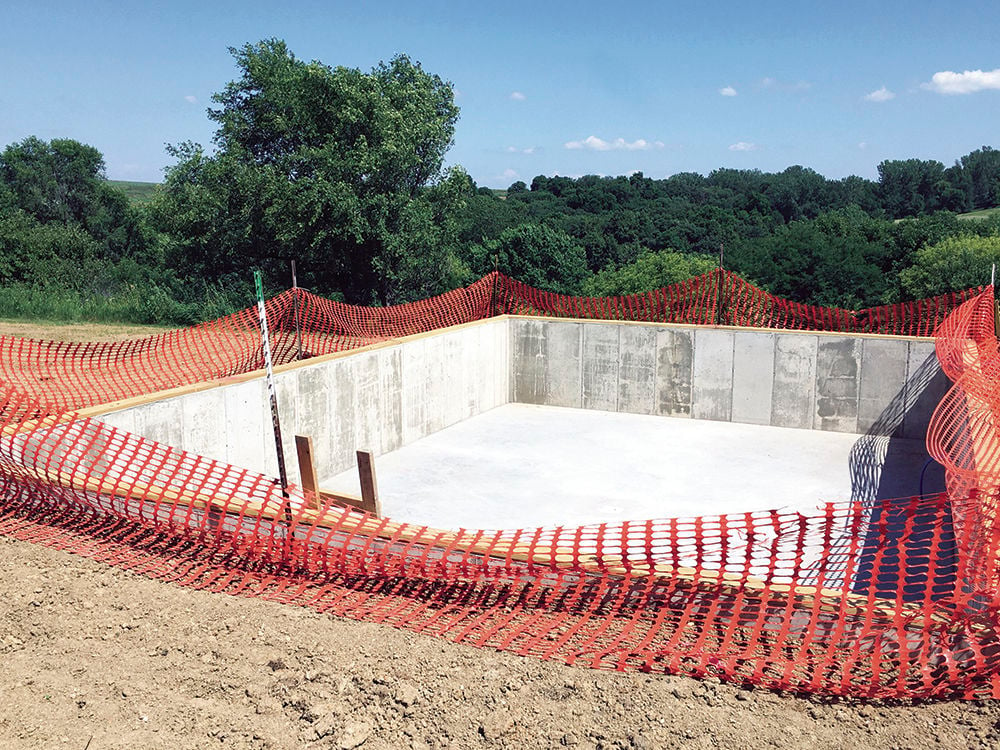 The foundation has been poured for a new cabin at Yellow Smoke Park. The cabin is expected to be open later in the fall. Photos by Dan Mundt 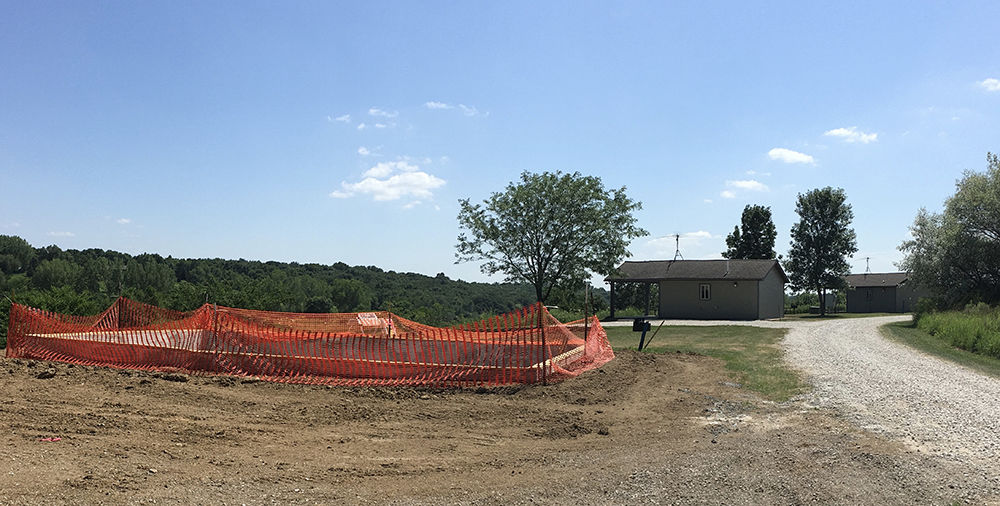 The new cabin will be situated on top of the hill with three older cabins at the park.

The foundation has already been laid for a fourth rental cabin at Yellow Smoke Park and the prefabricated building will arrive in late July or early August, according to Chris Gosch, Crawford County Conservation director.

“When you drive up to the cabins it will be the first one you’ll see,” Gosch said.

The cabin will be the second “large” cabin, at 24 feet by 36, feet and will sleep up to eight people.

“We’ll have a larger cabin on each end and the two smaller cabins in the middle,” he said.

The first large cabin has a loft, but the new one has three bedrooms on one level.

The other cabins all have just a single room except for a separate restroom.

Several months of finishing work will be required once the new cabin is in place, Gosch said.

Dirt work and painting will take place, along with the construction of a ramp.

Sewer, water service and electricity will be added.

An outlet for an RV will be included.

“It will be a few months before it’s ready, depending on when it gets here,” he said. “Probably late this fall it will be available.”

The first two cabins were placed in Yellow Smoke Park in the fall of 2005 and the third was added in the summer of 2014, which was the year Gosch took over as Conservation director.

He said use of the cabins at Yellow Smoke and Nelson parks has returned to nearly normal since COVID-19 restrictions were lifted.

“I wasn’t sure what to expect if everyone was staying home, but I think everyone is tired of staying home and wanted to get out and about,” he said.

“On Monday and Tuesday after the weekend we are constantly getting calls those days wanting cabins for the (next) weekend.”

A lot of reservations were canceled by individuals who no longer wanted to use them – but the open slots are usually rebooked within a day, Gosch said.

Summer weekends are mostly booked for the rest of this season.

“It’s pretty tough to get weekends, now. We turn people down all the time,” he said. “You’re probably looking at next summer if you want a summer weekend.”

Gosch said the cabins at Nelson Park are also booked for most weekends this summer, but a few dates are still available.

General usage of the parks is also returning to normal.

The Crawford County Board of Supervisors has been very supportive of the cabins at the county parks – and of the parks in general, Gosch noted.

“We’ve had tremendous support from the supervisors over the last decade and we’ve done a lot of projects at Nelson and Yellow Smoke Park,” he said.

Shooting in Glenwood under investigation

July 31, Glenwood, Iowa - On July 30, the Glenwood Police Department responded to a shooting at 506 S. Locust St., Glenwood. Upon arrival, one…

After about 25 minutes of negotiations on Thursday afternoon, James Fishback came out of his home in rural Crawford County, near Manning, with…

The foundation has been poured for a new cabin at Yellow Smoke Park. The cabin is expected to be open later in the fall. Photos by Dan Mundt

The new cabin will be situated on top of the hill with three older cabins at the park.