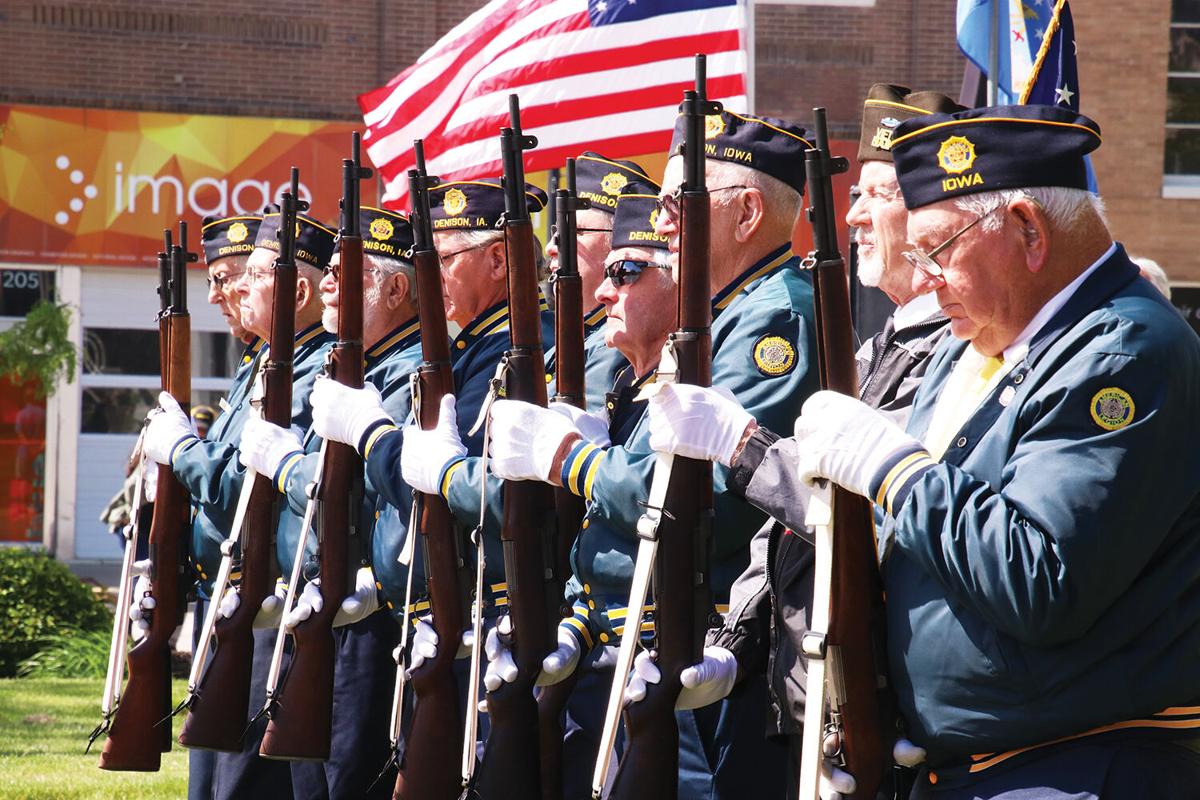 After firing three volleys in honor of the dead, the honor guard stands for a moment of silence for fallen veterans during the Memorial Day service at the courthouse in Denison. Photos by Gordon Wolf 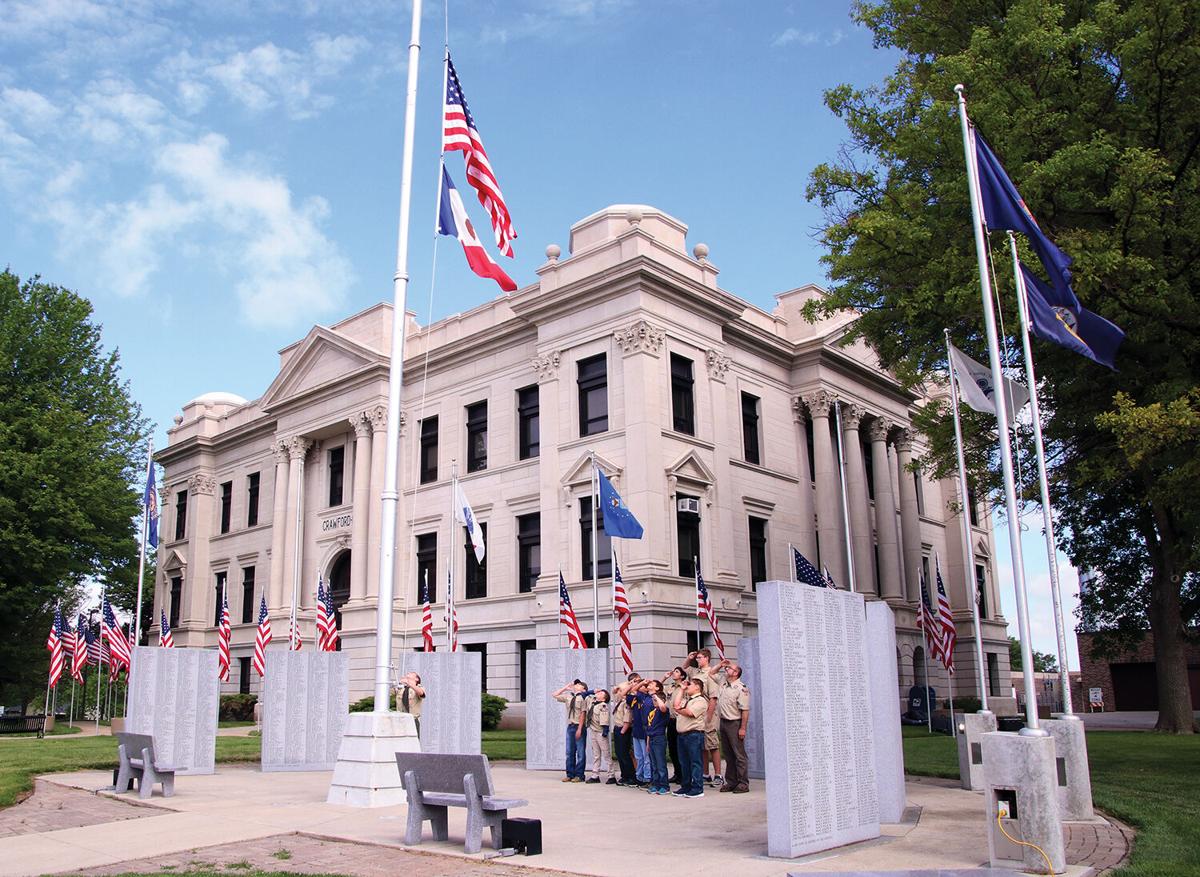 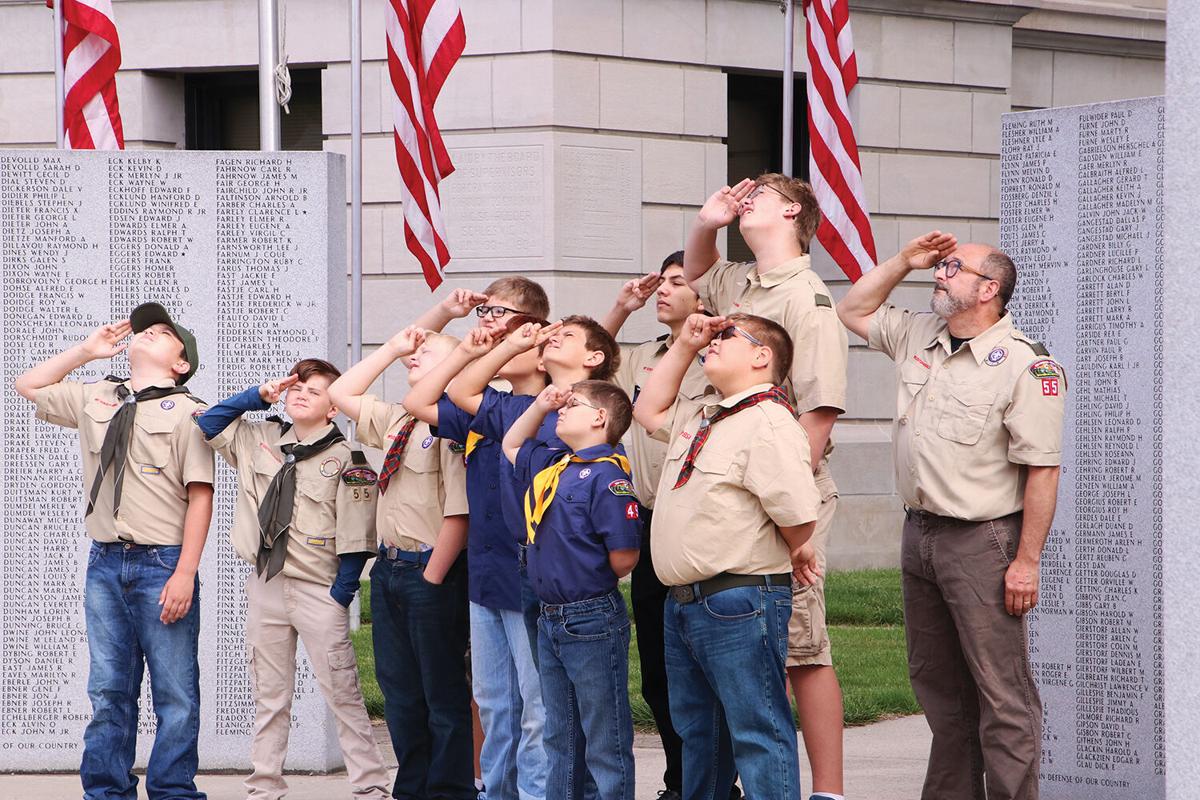 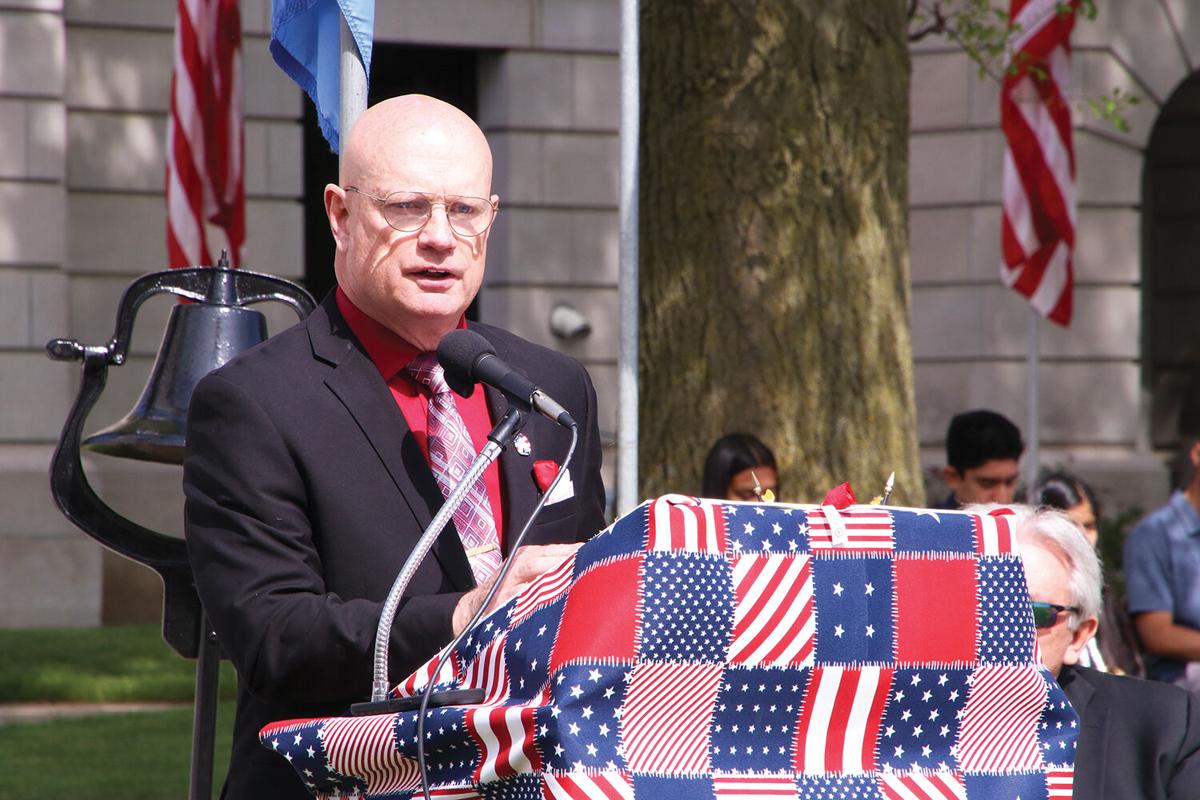 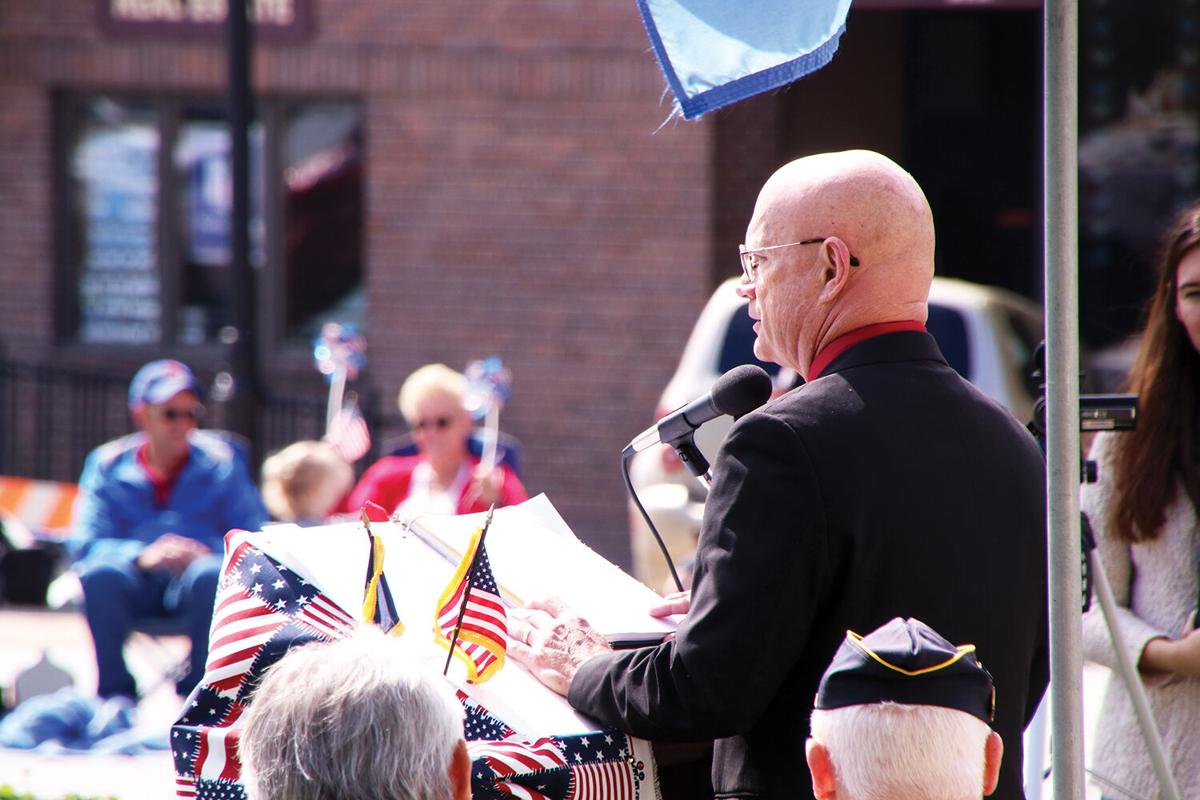 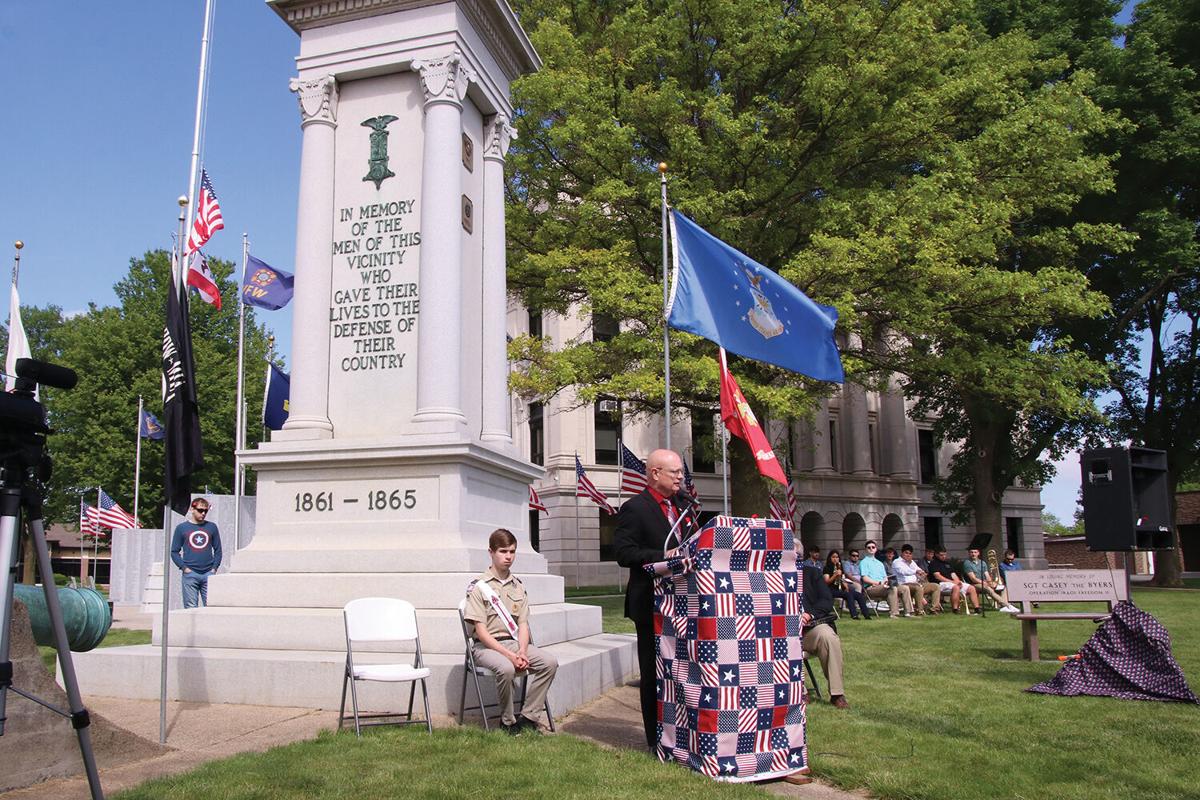 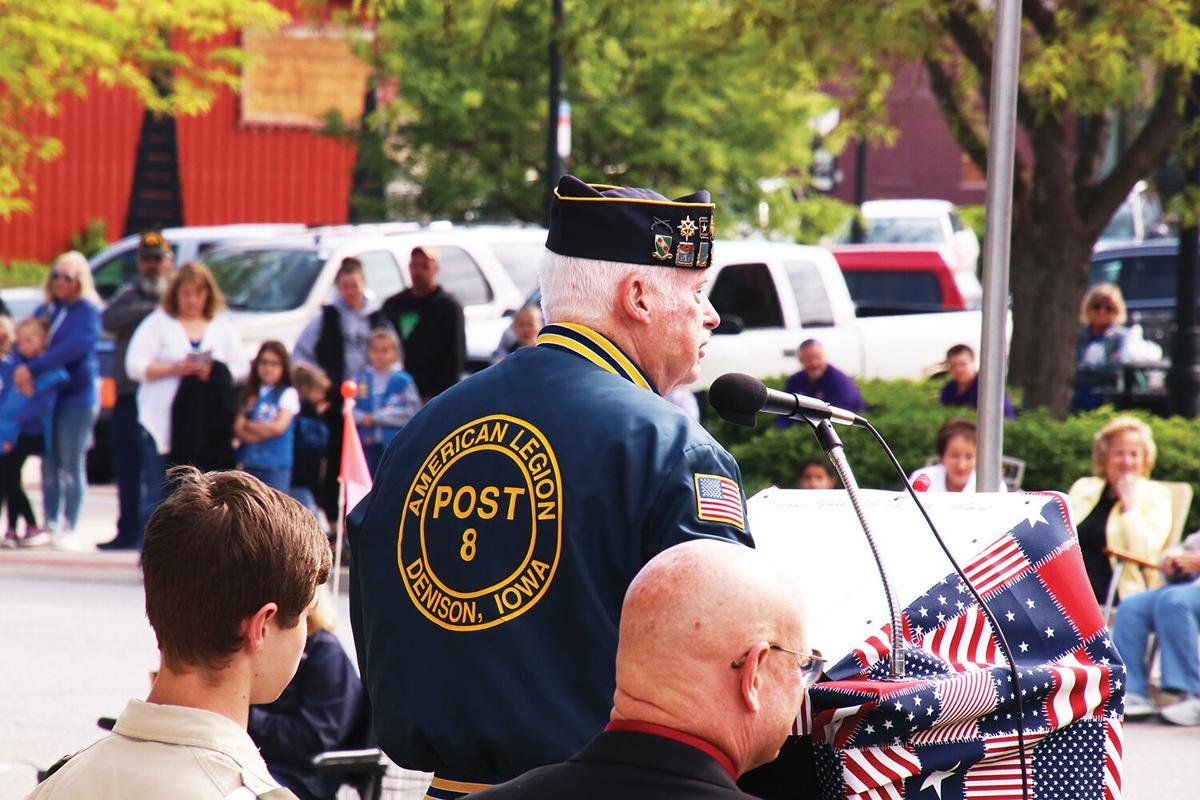 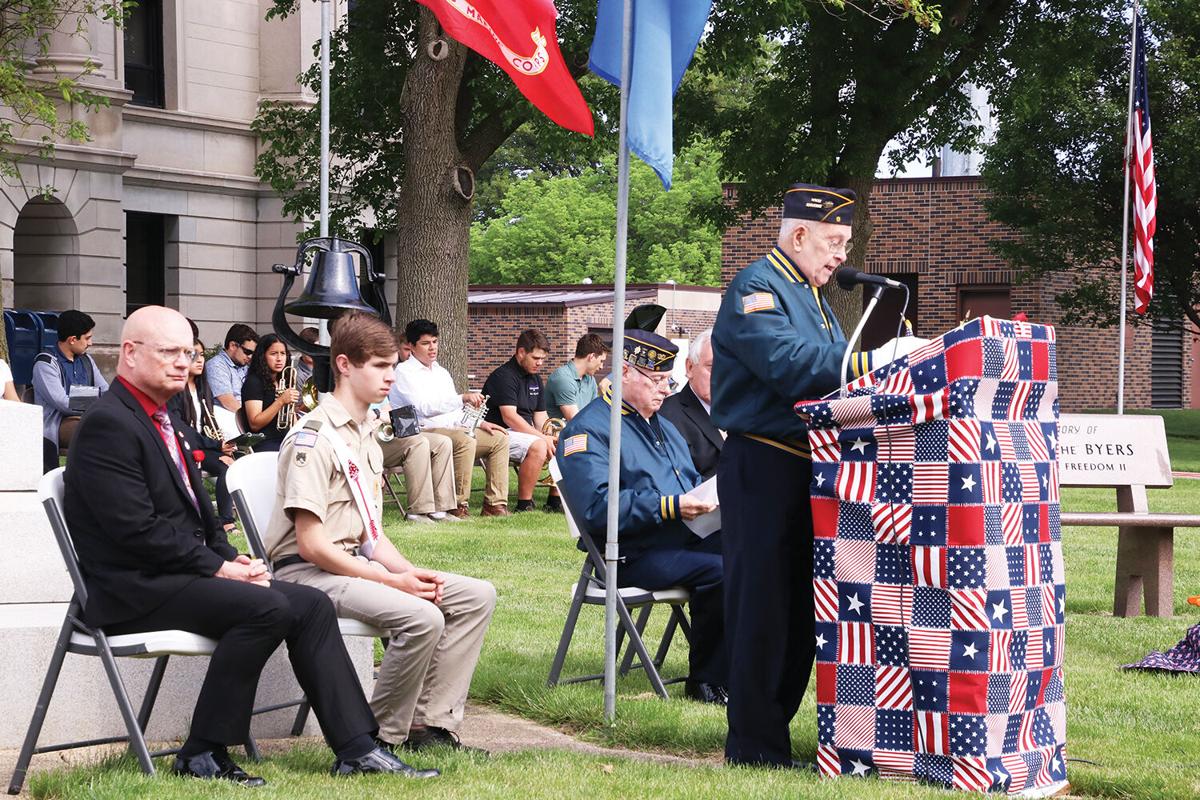 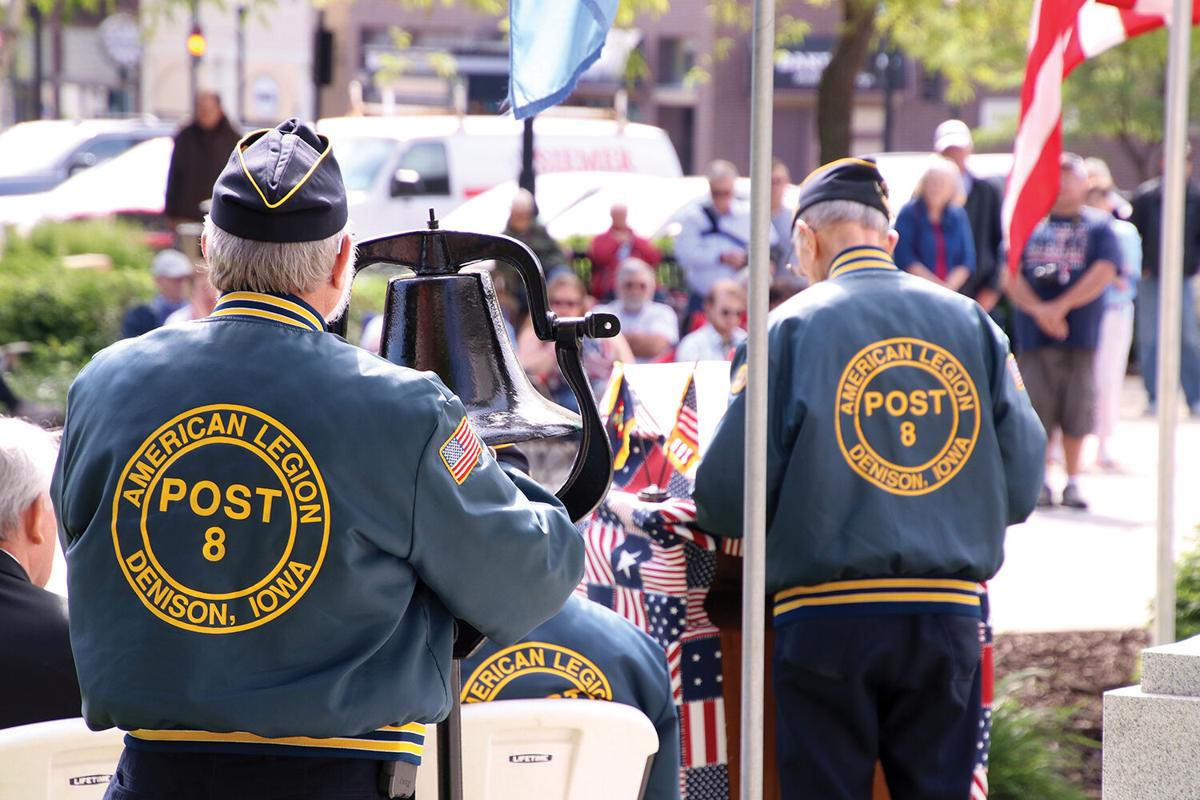 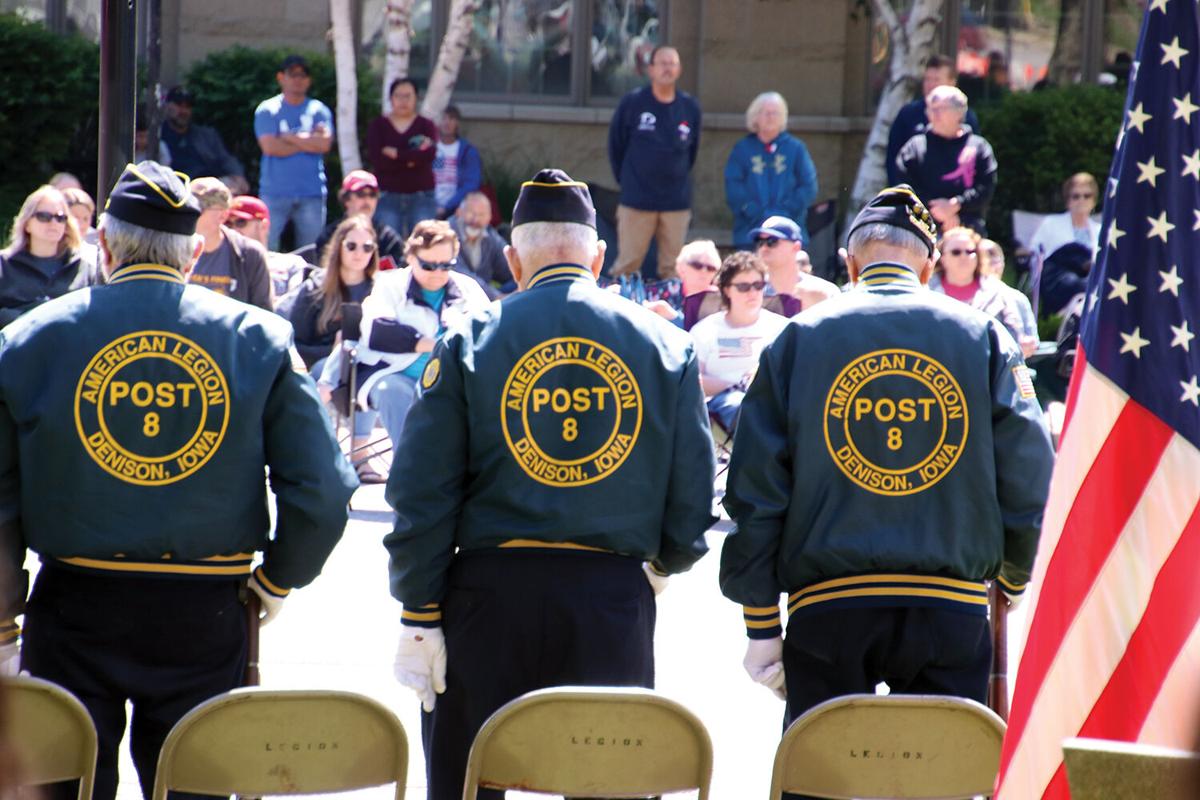 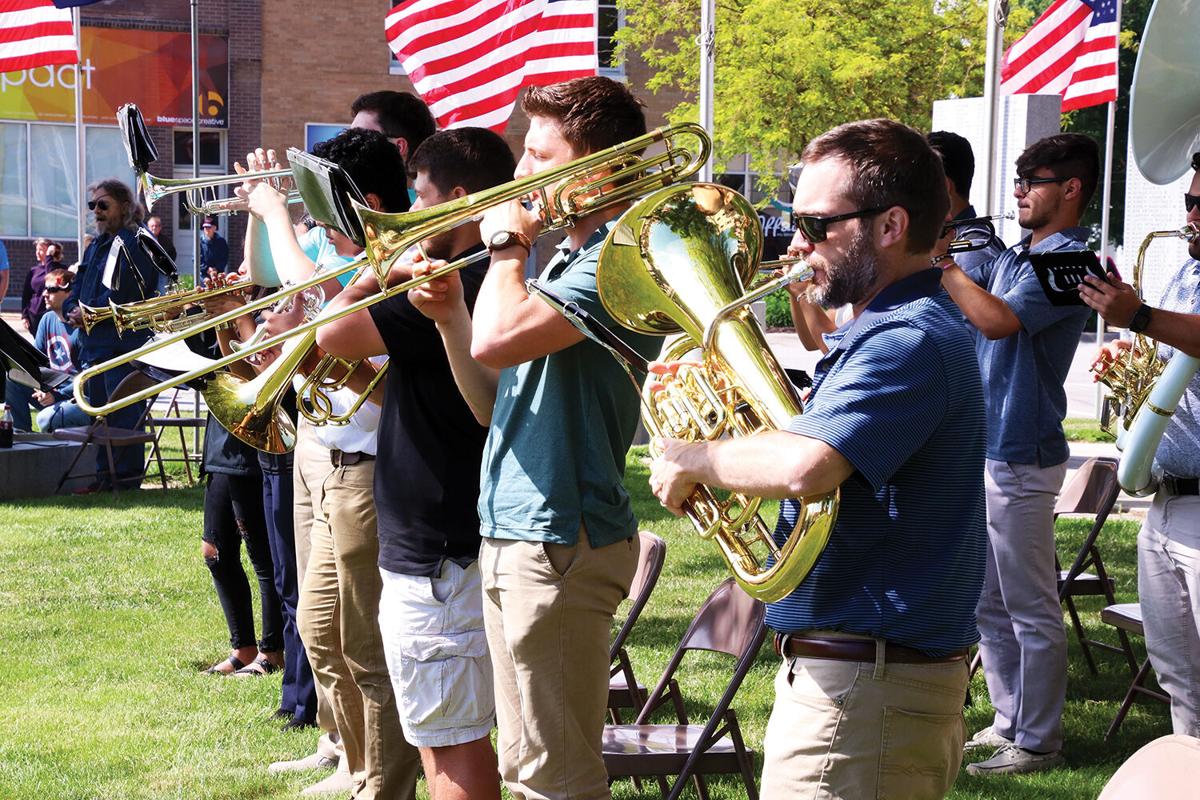 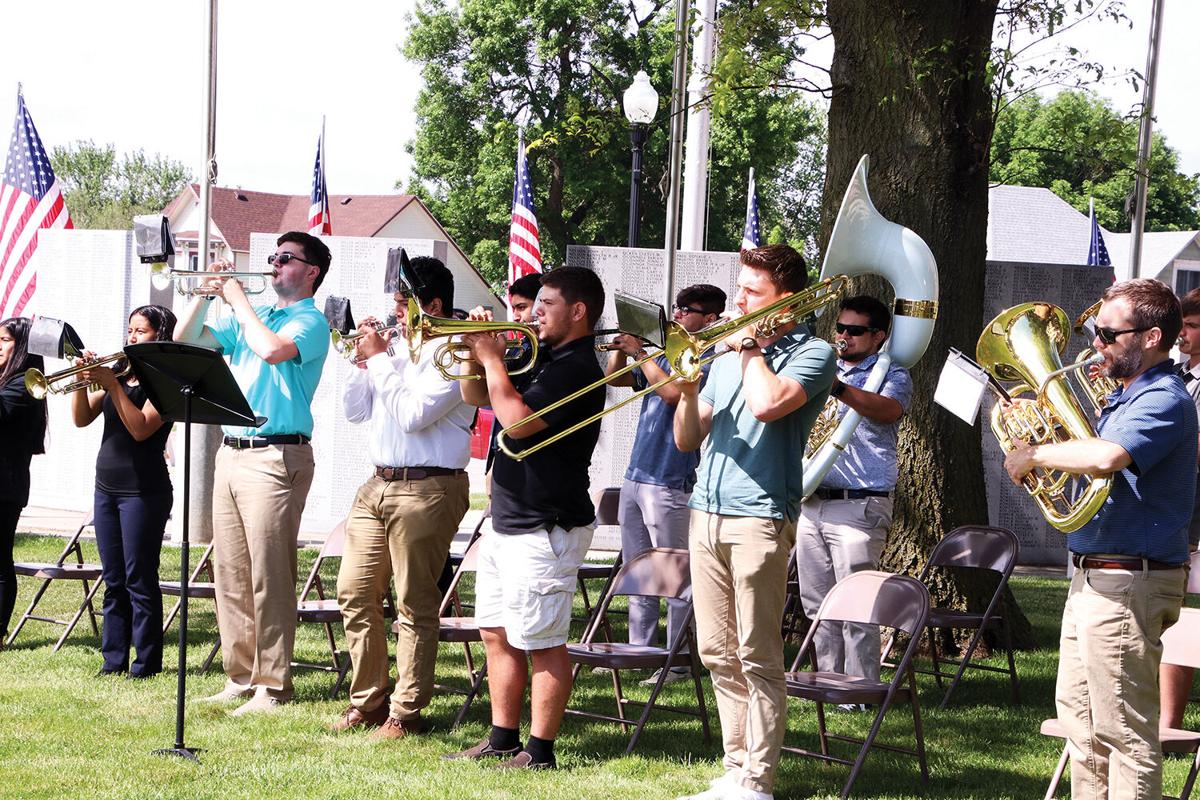 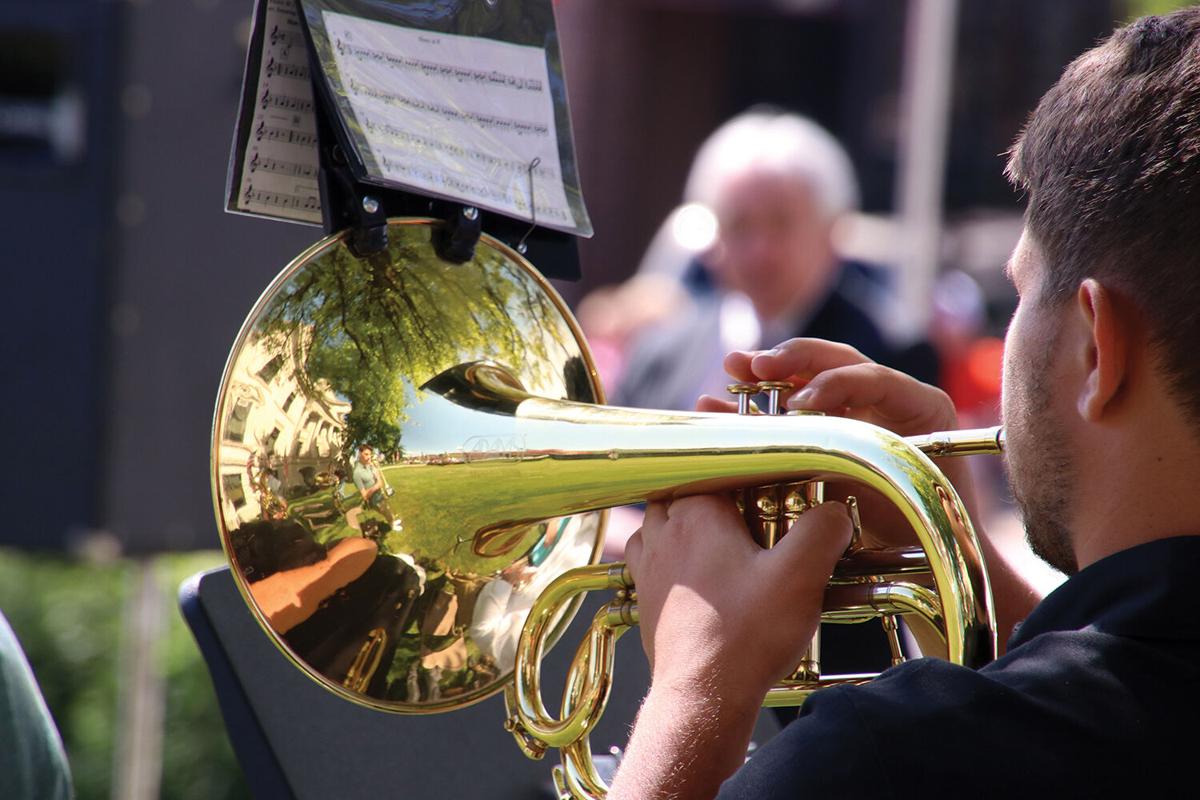 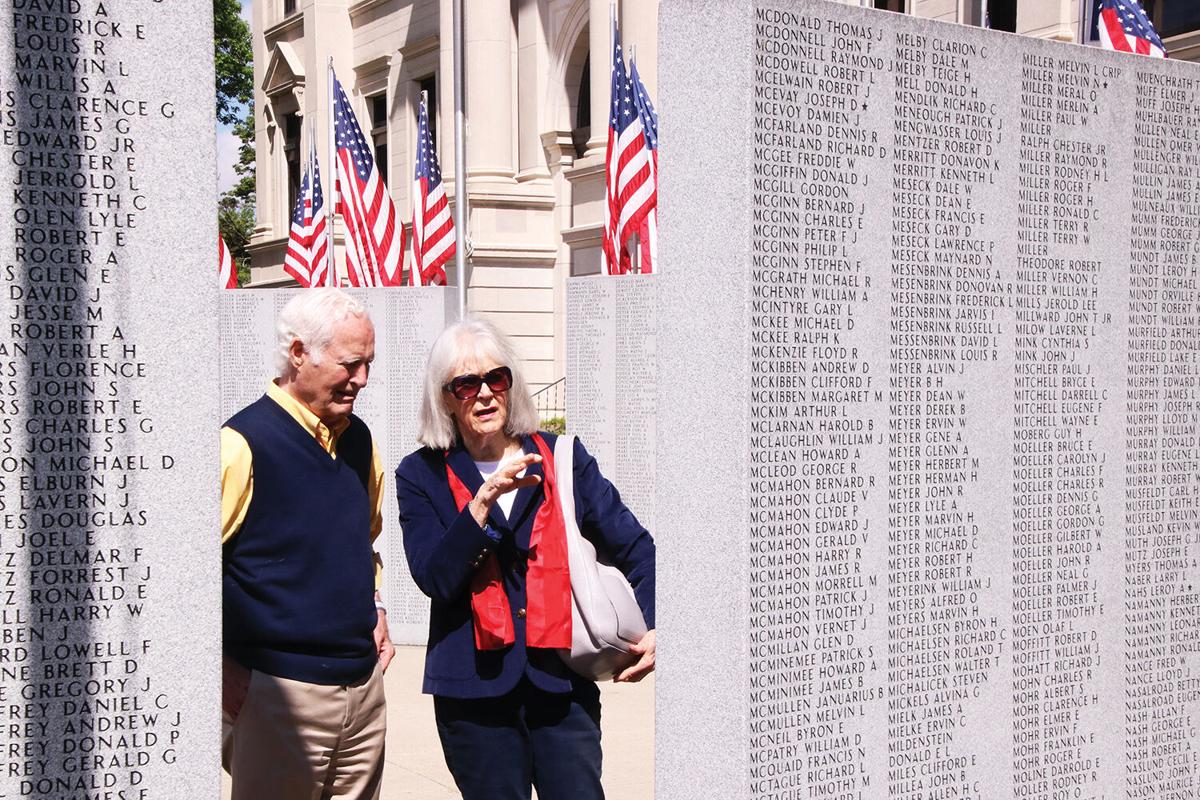 State Rep. Steve Holt, of Denison, a U.S. Marine Corps veteran, reminded people about the meaning of Memorial Day and the importance of carrying on the torch of liberty handed to us by fallen military members.

Holt traced the roots of what we now call Memorial Day, a day of full of military members and veterans organizations, the placing of flowers on the graves of fallen heroes, a wreath-laying ceremony at Arlington National Cemetery and gatherings such as the one in Denison. A time for families to come together, to slow down for a moment and enjoy the freedom and liberty for which so much was given, by having family gatherings and cookouts, said Holt.

“But it is so much more than a long weekend and we must never forget the true meaning of this day,” he continued.

Holt pointed to an important Memorial Day tradition - the wearing of red poppies to honor those who have fallen in the defense of freedom. Holt said the fields of the poppy hold a profound message, and read the poem “In Flanders Fields,” written by Canadian Lt. Col. John McCrae, who served as a brigade surgeon for an Allied artillery unit in World War I.

“He was treating the wounded and he was struck by the sight of bright red blooms on the broken and bloodied battlefield. He wrote a poem called “In Flanders Fields” in which he became the voice of the fallen soldiers,” Holt said.

“Lt. Col. McCrae’s words were a profound warning to future generations not to drop the torch of liberty but instead to stand strong against the enemies of freedom,” Holt continued. “Not capitulation to a false peace that robs our nation of liberty. Not a cry for peace at all costs; just the opposite.”

Holt read the last verse of the poem: “Take up our quarrel with the foe. To you from failing hands we throw the torch. Be yours to hold it high. If ye break faith with us who die we shall not sleep, though poppies grow in Flanders field.”

“These words demand that today we honor those who died for our freedom by taking up the quarrel. We must keep fighting for liberty and the foundational values of our nation,” said Holt.

“They have thrown the torch of liberty and we are to hold it high. We dare not break faith with those who died for the ideals of America. As Lt. Col. McCrae so eloquently put it, if we break faith, if we do not defend the torch of freedom and America’s ideals, our dead will have died in vain and they will not sleep.

“The best way, the truest way to honor our fallen war heroes is to take up their cause and never let the torch of liberty grow dull or be extinguished.”

Holt pointed out that both in peacetime and in war, military personnel sometimes give their lives for liberty’s torch.

He shared a personal account of a peacetime tragedy that occurred on October 16, 1985, in which 15 of 19 Marines onboard a CH-46 helicopter perished when the aircraft took off from the deck of the U.S.S. Guadalcanal. Instead of heading toward the sky, the helicopter headed downward, struck the ocean and vanished beneath the waves. At the time, it was the second worst aviation accident in Marine Corps history. Holt read the names of the 15 Marines who perished.

Holt shared another peacetime tragedy. In 1988 he was a drill instructor at aviation officer candidate school in Pensacola, Florida, the boot camp for future naval aviators, which was intense and at times even brutal, Holt said.

He said he had the honor of training a candidate, Kieron O’Connor, who excelled at aviation officer candidate school and graduated at the top of his class. He eventually was selected to be a Blue Angels pilot, something only a tiny handful of naval aviators achieve – the elite of the elite who fly their aircraft in precision maneuvers that only the best pilots can accomplish, said Holt.

On October 28, 1999, while flying Blue Angel 3 at an airshow in Georgia, Lt. Cmdr. O’Conner was killed along with another pilot, Lt. Kevin Colling.

“Skilled pilots and American warriors, killed not on the battlefield but in peacetime. Freedom indeed has a heavy price,” said Holt. “We must never forget that even in peace, our military men and women can sometimes give the ultimate sacrifice, that we honor this day.”

He said U.S. casualties in carrying the torch of liberty since 1776 total over 2.8 million with over 40,000 missing in action.

“The words in stone before us read, ‘Dedicated to all our sons who answered the call of patriotism upon the nation’s battle field,’ and of course we know that now extends to our daughters as well,” he said.

Holt turned to those close to home who gave their lives. He reminded people that in 2017, 10 bridges were named in honor of Crawford County veterans killed in action.

 Dallas Nihsen, of Charter Oak, died in Vietnam in May 1972. A bridge in Ricketts now carries his name.

 Casey Byers, of Denison, died in Iraq in June 2005. A bridge east of Schleswig has been named for him.

 Eugene Kock, of rural Westside, died in Vietnam in March 1969. His name is now on a bridge north of Westside.

 Larry Blackman, of Denison, died in Vietnam in February 1967. A bridge on S Avenue north of Manilla has been named for him.

 Michael Spotswood, of Denison, died in Vietnam, December 1968. His name is now on a bridge on S Avenue north of Manilla.

 James Justice, of Manilla, died in Afghanistan in April 2011. A bridge on 330th Street just north of his hometown has been named for him.

 Dennis Holtorf, of Denison, died in Vietnam in November 1969. His name is on a bridge on U Avenue near Buck Grove.

 Walter Thomsen, of Dow City, died in Italy in January 1944. A bridge just north of his hometown has been named for him.

 Michael Heller, of rural Dunlap, died in Vietnam in February 1970. A bridge near Dow City, where he graduated from high school, now carries his name.

Holt thanked Bulletin and Review reporter Dan Mundt for a November 2017 story about the veterans and the bridges and thanked Crawford County Supervisor Kyle Schultz who had the idea for naming the bridges in honor of the fallen veterans.

“To the heroes for whom these bridges are named and their families and to countless other veterans and families who gave the ultimate sacrifice for our freedom, our words fall short, our gratitude can never be enough, our hearts are deeply grateful but heavy, and we can never fully comprehend the profound sacrifice given for us, for our children and for our future,” said Holt. “John 15:13 tells us, ‘Greater love hath no man than this,that a man lay down his life for his friends.’

“Today is the day that we honor our heroic veterans,” said Holt, “not comic book heroes but true and real American heroes who gave their lives for their country for the ideal of American liberty for their friends and for many they did not even know.

“Young men and women from all across America have taken that torch,” he continued. “They have held it high. They have kept us free and they have passed that torch to us. Now we have the watch and it is a sacred watch indeed.”

Watch Now: Biden wants to raise taxes on the wealthy

Watch Now: Biden wants to raise taxes on the wealthy

Watch Now: How much will space travel cost?

Watch Now: How much will space travel cost?

Funeral services for Robert “Bob” Thul, 78, of Denison, will be conducted at 2 p.m. Sunday, September 26, at Immanuel Lutheran Church in Schle…

Finding a new purpose for the old power plant

Funeral services for Beverly Miller, 74, of Dow City, will be conducted at 10:30 a.m. Monday, September 27, at Zion Lutheran Church in Denison…

After firing three volleys in honor of the dead, the honor guard stands for a moment of silence for fallen veterans during the Memorial Day service at the courthouse in Denison. Photos by Gordon Wolf