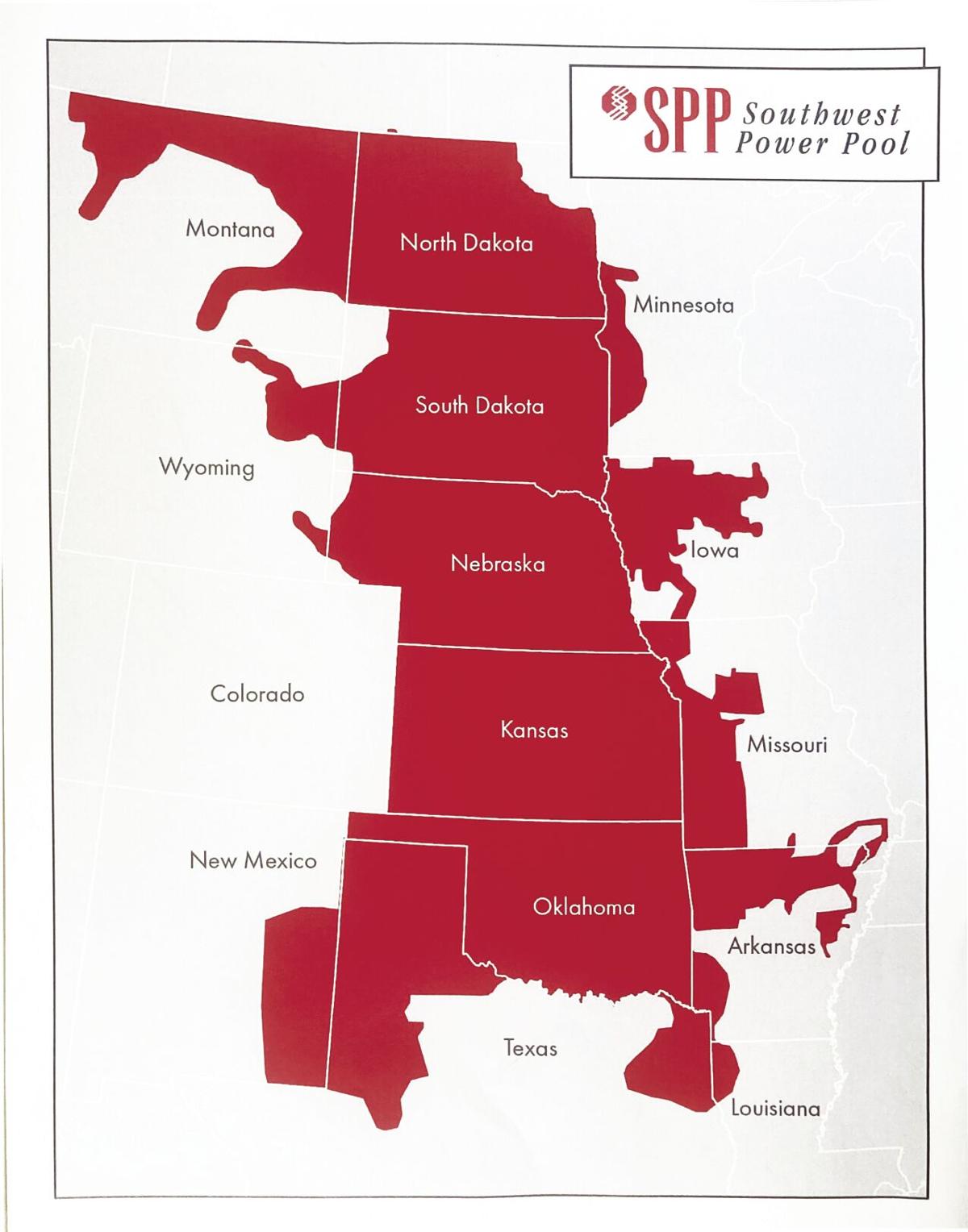 The map shows the extent of the region served by the Southwest Power Pool. 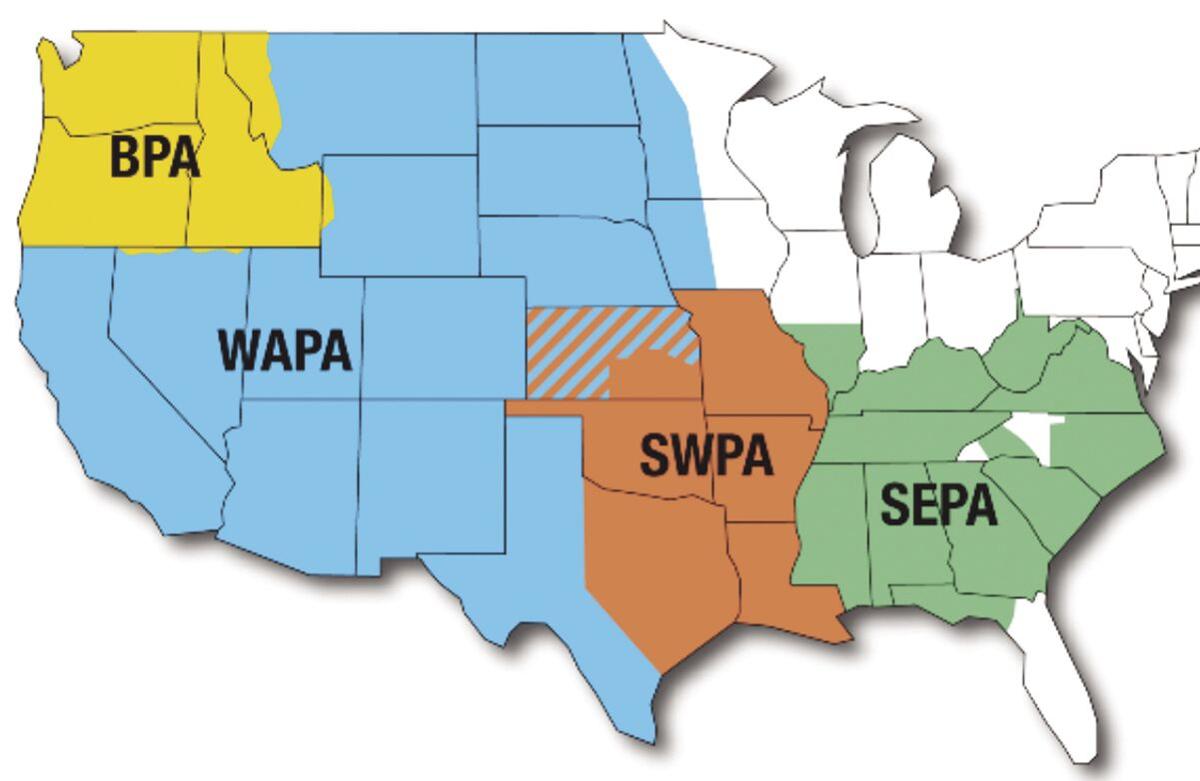 The blue part of the map shows the region served by the Western Area Power Administration (WAPA).

Tuesday morning brought something that Rory Weis, general manager of Denison Municipal Utilities (DMU) has never seen in his career - an ordered blackout.

The blackouts, or controlled interruptions in power, are intended to guard against system failure when the demand for power is greater than the amount of power being generated.

Denison became part of the rolling blackout shortly before 7:30 a.m. on Tuesday. The town went back online in phases, with the entire community connected to power by 11 a.m.

Creating the need for the rolling blackouts in the region is the fact that the area of extreme cold from top to bottom in the Midwest approximates the 14-state footprint of the Southwest Power Pool (SPP).

SPP is one of nine independent system operators (ISO) and regional transmission organizations (RTOs) in North America. ISOs and RTOs are mandated by the Federal Energy Regulatory Commission to ensure reliable supplies of power, adequate transmission infrastructure and competitive wholesale prices of electricity.

Information on SPP’s website describes ISOs/RTOs as the “air-traffic controllers” of the electric power grid.

The rolling blackout hit Denison when SPP ordered the Western Area Power Administration (WAPA) to take demand for 200 megawatts off the grid.

WAPA is one of four power marketing administrations within the U.S. Department of Energy. It markets and transmits wholesale electricity in a 15-state region in central and western United States, a region that includes Denison and other area customers.

Weis said DMU was not warned of the rolling blackout.

In fact, warning all utilities in the grid seems unfeasible.

Information provided by DMU said that when WAPA gets a directive from SPP, it has 15 minutes to initiate the rolling blackout.

“When SPP sends out a directive and the utility has 15 minutes to respond, there’s no way they can notify every utility within their service area that it’s going to happen, in that amount of time,” Weis said.

“What they’re (SPP) doing is trying to protect this 14-state transmission grid,” Weis explained. “If a transmission line fails or we lose a generating facility somewhere, the problems just compound on top of each other.”

The blackout in Denison lasted until about 10 a.m. for some DMU customers, and 11 a.m. for others.

In the aftermath of the blackout, people asked questions about the rolling blackout via DMU’s Facebook page.

Weis believes it is the first time SPP has issued Level 2 and Level 3 alerts.

He said his opinion why the rolling blackouts were ordered is how far south the cold stretch has extended.

“It was 1 degree in Dallas, Texas, this morning,” he said on Tuesday. “I think it’s just the extent of how much of the country is having bad weather.”

To put some electricity back into the grid, DMU has been running its generator at its west receiving substation since 4 a.m. on Monday, with a couple breaks for refueling.

“In the coldest days of winter and the hottest days of summer, we will peak out somewhere between 28 and 30 megawatts,” Weis explained.

He said one of the reasons the generator was installed is for use in the event of complete blackout that is expected to last a while. The generator will provide minimum levels of service to the DMU office and water and wastewater plants to maintain those critical services.

At its board meeting on Tuesday, Weis and DMU Electric Department Manager Mike Wight provided the following timeline about the blackout.

 DMU was called by Missouri River Energy Services (MRES) on Sunday to start running its generator at 4 a.m. on Monday. The initial request from MRES was to run the generator from 4 a.m. until noon on Monday, but then MRES asked if DMU could continue to run the generator. Fuel was coming to top off the tank, and the generator was started again at 1 p.m. on Monday and ran until midnight. (MRES is a multi-state, joint-action agency that helps municipalities that operate their own electric systems to work together in planning for future power supply needs and solving other mutual problems. It serves 61 municipal electric utilities, including DMU.)

 At 7 a.m. on Tuesday, FSC brought more fuel for the generator.

 DMU got the sewer plant on the power system first, followed by the water plant and the DMU offices and then the hospital and Smithfield. DMU waited five minutes before turning the circuits on so that the system did not get overloaded.

 The last area to have power restored was the south side of Denison, at the request of Wendy Harm with Black Hills Energy. Black Hills Energy was worried about pressure on their lines with all the furnaces coming on at once

 Power was restored to everyone by 11 a.m.

Weis pointed out that while the DMU generator provides only two megawatts of power, every little bit helps, and that other utilities were doing the same thing.

“There’s 61 member-communities in MRES and they are relying on those that have generators to put power back into the grid,” he explained.

He added that a number of community partners in Denison also used their on-site generation to help out. The fire station started its generator on Monday, prior to Weis asking them to do that. Duane Zenk offered to put the courthouse on its generator as well. And on Monday evening Weis sent an email to officials at Crawford County Memorial Hospital, asking them to put their generator online on Tuesday morning.

“Any load they can take off our systems helps,” Weis said. “These types of facilities are very critical to serving the community and they are very willing to run their generation.”

The build-up toward the rolling blackouts began on Sunday when SPP requested its members and market participants to begin conserving energy at midnight on Monday and for the following 48 hours to mitigate the risk of more widespread and long-lasting outages.

By 6:46 a.m. on Tuesday, SPP declared a Level 3 alert effective immediately for its entire 14-state area and said that generation capacity system-wide had dropped below the load of 42 gigawatts (GW) at that time, due to the cold temperatures and inadequate supplies of natural gas.

Weis said he had started seeing utilities close to Denison going through some outages on Monday and that he hoped by the time he got to work on Tuesday morning, they would be through the worst of the situation.

But they weren’t. When power went out, Weis said DMU first looked at the SCADA (supervisory control and data acquisition) system and saw that no voltage was coming into DMU’s transmission station.

“We learned after the fact that they (WAPA) received a call from SPP. WAPA was supposed to curtail 200 megawatts of load off their system,” he said.

SPP ended its emergency alerts on Thursday but remains in a period of conservative operations until 10 p.m. on Saturday.

Weis talked about a learning curve regarding the rolling blackouts.

“They’ve been taking coal-fired plants out of production and relying pretty heavily on wind and solar energy, and when it gets this cold, we see reports of the wind turbines not being able to turn,” he said.

“If you look at the footprint of SPP, the entire region of the center of the United States and beyond, we’re in an unprecedented period of time, again, that there’s got to be some planning going forward, because who’s to say it’s not going to happen again,” Weis added.

DMU Board member Chad Langenfeld asked if the incident merits a discussion with MRES and SPP about the type of future generation to create.

“Is it more wind or solar, which we can’t count on, or what is possible that we can count on?” he asked.

“You can count on that being in our next MRES Board of Directors discussion,” Weis responded.

He commented on the push to increase wind and solar generation but also pointed to a push to get electric vehicles on the road. At the same time he asked how many generation facilities had converted from coal to natural gas or had completely shut down.

Norelius Community Library back to normal business hours on March 1

After a year of modified library hours, the library board of trustees is happy to announce that the Norelius Community Library will resume its…

Even though statistics were down from January 2020, Crawford County Memorial Hospital (CCMH) had a profit of $20,359 in January 2021, accordin…

The sentencing of Brenda Jensen, the former head teller of Consumers Credit Union in Denison, has been set for 3:15 p.m. on March 8, in Courtr…

The map shows the extent of the region served by the Southwest Power Pool.

The blue part of the map shows the region served by the Western Area Power Administration (WAPA).