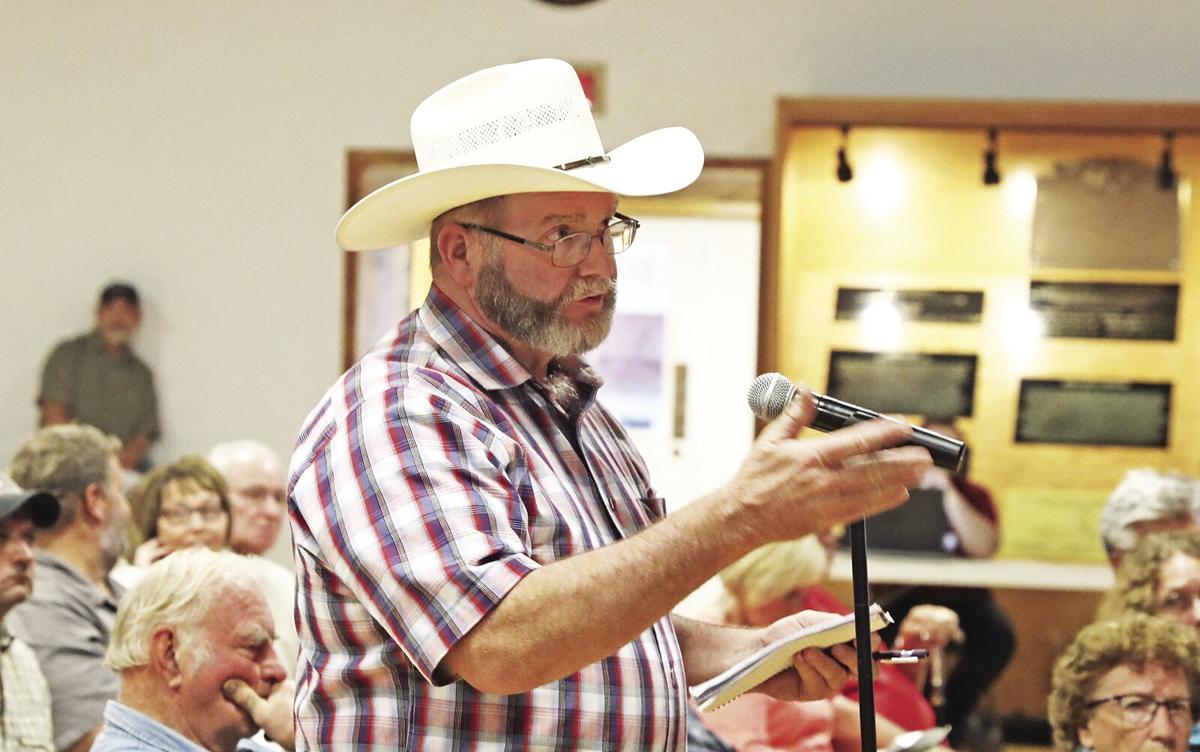 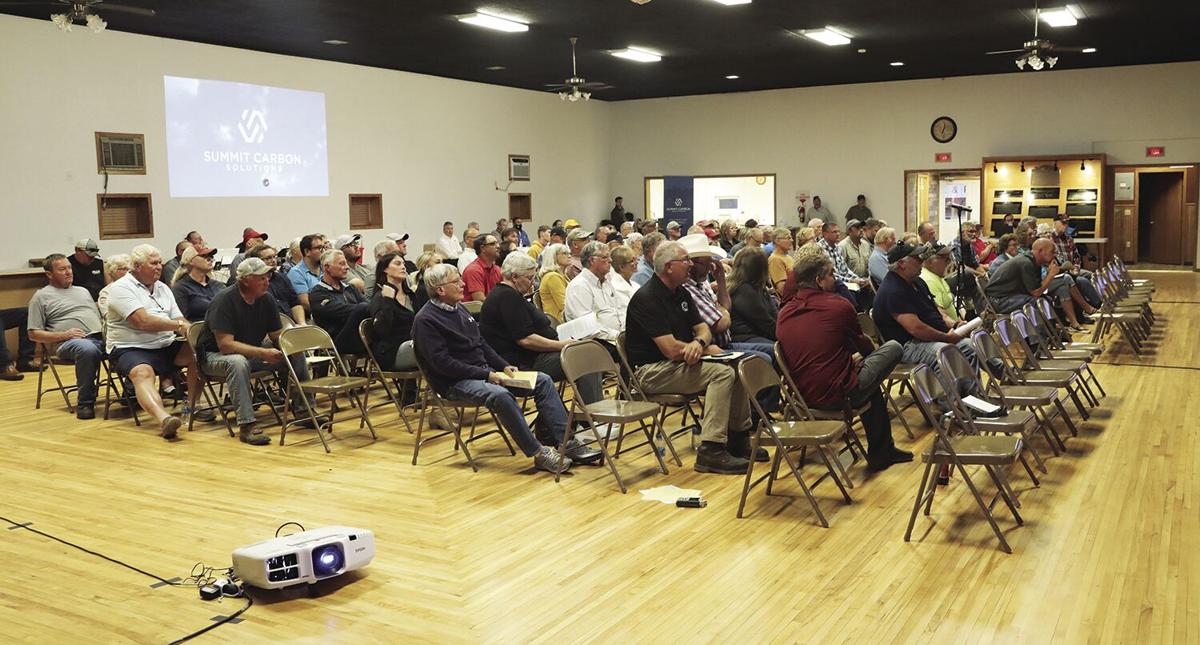 Representatives of Summit Carbon Solutions took questions from landowners and members of the public in the second part of an October 5 informational meeting at Manilla Memorial Hall.

Questions concerned the proposed “Midwest Carbon Express” pipeline that, if approved, will carry CO2 from Midwestern ethanol plants to North Dakota, where it will be permanently buried underground.

The project pipeline, if approved, would pass through Crawford County.

The following is an edited and condensed account of the question and answer session, which lasted about 40 minutes.

“If we could open-cut a road, we would but depending on traffic etc., instability, we may bore under it and we would either bore or drill the streams/waterways, depending on how large they are,” Powell said.

He said the pipeline will be a “comfortable depth” under the mud line and would take into consideration flood-prone areas.

The company has an obligation to inspect the pipeline on a regular basis; each crossing will be determined independently and the company would prefer not to have to return to do additional work after the pipe is constructed, but the company will return to fix any problems with erosion or settling, Powell said.

Assman asked how revenue is generated for the project.

The first is the Section 45Q tax credit; the project would generate $50 per ton of CO2 put into permanent geologic storage.

The balance of the revenue would come from a cost/revenue share with the 31 ethanol plants in the project.

“When we capture the CO2 off an ethanol plant, it reduces the emissions score of the plant so the carbon intensity of the ethanol they produce goes down,” Pirolli said. “When the score decreases, the value of their ethanol increases when it’s sold into low-carbon fuel markets.”

Crawford County Supervisor Ty Rosburg asked if the company provides surety in the case of an economic catastrophe.

Powell said the company is preparing models to prepare for what would happen if the pipeline has a pinhole leak or a bigger breach.

“We have to have emergency response preparedness plans and part of that is working with local first responders,” he said.

The company would help provide training and equipment for first responders in case of a catastrophic event; emergency drills would take place on a regular basis, as required by the Pipeline and Hazardous Materials Safety Administration (PHMSA).

“CO2 is an asphyxiant, so if we have a big release, and there’s livestock or human beings there, it could be dangerous to your health, but it’s not combustible, it’s not flammable,” Powell said. Ketzner said more than 5,000 miles of CO2 pipelines are in use today in the United States and other carbon sequestration projects are also taking place.

In response to a question about pipeline temperatures, Powell said the CO2 leaves the plant at 89 degrees Fahrenheit and stabilizes to ground temperature; it does not heat or cool the property.

Christy Rickers, an archeologist from Vail, asked about environmental and cultural surveys required for the project.

Powell said about 20 survey crews have started biological and cultural surveys in the four other states involved in the project, but they have not started in Iowa because the company has to follow the IUB process.

The company would like to get the surveys done in Iowa before snow falls; requests for permission to survey have been sent to landowners, he said.

Rickers said the survey process would take longer than two months, and the project could be delayed if anything of importance is found.

Powell said the company is surveying property wider than the proposed easement so that if something is found, the pipeline could potentially be moved to another area that has been surveyed.

Ketzner asked landowners to meet with the land agents on hand at the back of Memorial Hall at the end of the meeting to give permission for the surveys.

“If we’re fencing back there and we poke a hole in your line, am I dead?” asked Denison resident Dale Collins.

He said a hole in the pipe would cause a release of pressure and dispersion of CO2.

“It wouldn’t be good for your health, depending on how much it was, so we’d rather you not do that,” he said.

The company would spot the pipeline if a farmer wanted to put a fence near it, but they would rather not have a structure built on the pipeline.

“The pipeline is over one-half inch thick, so it would be a little difficult to just poke a hole in it,” Pirolli said.

Collins asked what it would cost him if he hit the pipeline.

“We’d just rather you not,” Powell said, which elicited laughter from the audience.

The CO2 will leave the ethanol plants at about 2,100 pounds of pressure and will be maintained above 1,300 pounds to keep it in the semi-liquid phase, he said.

In response to a question about when a landowner could request a change to the route, Powell said, “The sooner the better.”

He said the company is willing to work with landowners, but said a good time would be during the next two or three months while the survey is being performed.

In response to a question about how the project would affect the future land value, Powell said the easement would transfer to the new owner.

He said the overall project will help ethanol and agriculture compete in future markets and greater use of corn would boost land prices.

Pirolli said the majority of the project contractors are committed to hiring local labor and skilled labor as often as possible.

The project route follows existing utility corridors so as to be the least disruptive to landowners and others, Powell said.

Crawford County Supervisor Kyle Schultz, a past fire chief, asked what would happen if the pipeline was punctured.

Powell said he did not have information about how fast the CO2 would escape and disperse, but said the pipeline will have automatic valves that would close within 30 seconds.

The company is creating models that will be used to mitigate risk as much as possible, he said.

The pipeline is designed to last 25 years because the IUB permit would be for that period of time – and the hope would be to never have to replace it, Powell said.

Some fuel pipelines from the 1950s are still in use because they are well maintained, he noted.

When no one else had questions for the company representatives, IUB Board Member Josh Byrnes announced that Summit Carbon Solutions had met the IUB’s requirements for the presentation.

“Summit Carbon may now begin negotiations with landowners for easements or other property interests for this project located in Crawford County,” he said before adjourning the meeting.

Watch Now: Are RoboCops coming to your police department?

Watch Now: Are RoboCops coming to your police department?

A visitation for Kenneth Anton Mueller, 25, of Urbandale, formerly of Ricketts, will take place from 4 to 7 p.m. on Thursday, October 21, at t…

Upon suggestion from Jennifer Smith, an attorney in Denison, the city council tabled an agenda item to amend Chapter 25 of the city code at it…

“I wonder what she was thinking about on her way home,” said Ann Hanigan-Kotz of her great-great-grandmother, Caroline Olsen, who drove a wago…

CCMH COVID positivity at 9.3%; clinic busy with a variety of ailments

The seven-day positive COVID-19 case rate at Crawford County Memorial Hospital (CCMH) was 9.3% as of Thursday, according to Don Luensmann, CCM…

The Denison Tourism Board last Tuesday awarded a $2,945 request from the Donna Reed Foundation for the Performing Arts to pursue listing the D…

Funeral services for Roger Brodersen 78, of Denison, will be conducted at 10:30 a.m. Monday, October 18, at Zion Lutheran Church in Denison wi…