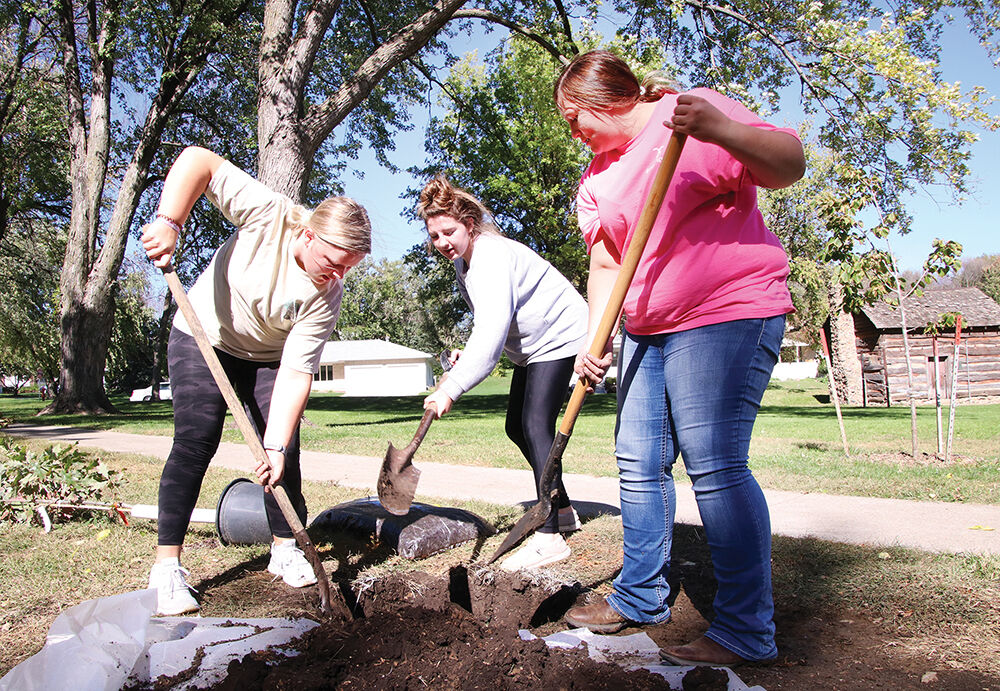 Lillian Schultz, Elizabeth Cary and Elsie Jenkinson dig a hole for a tree. 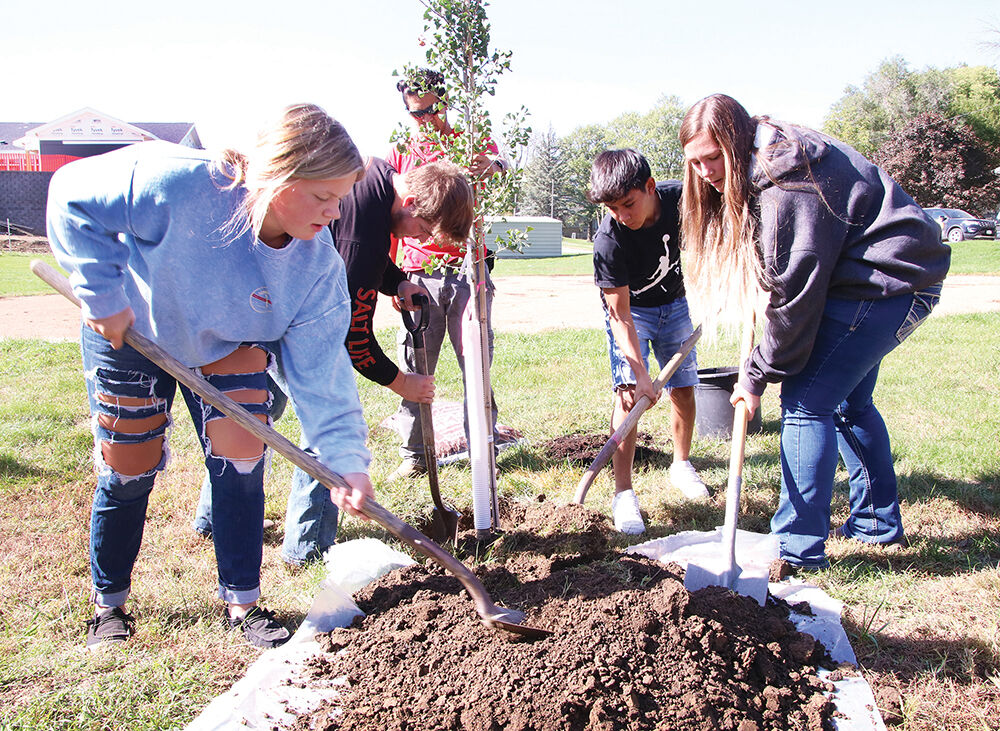 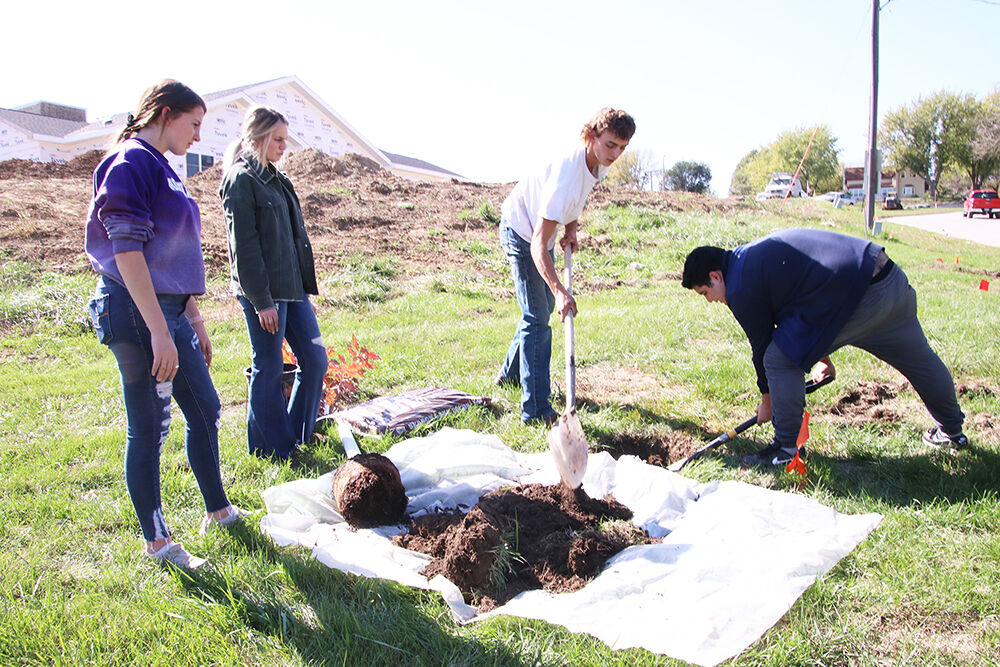 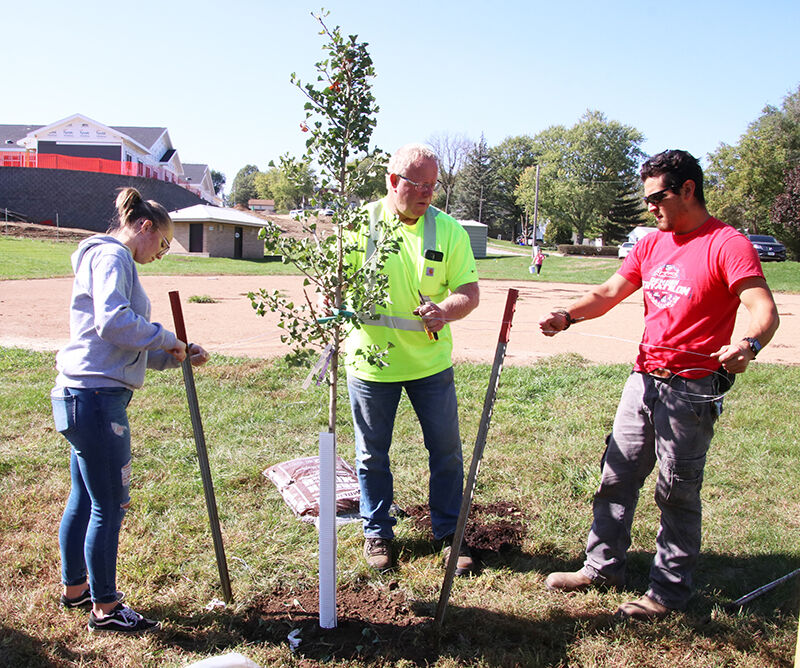 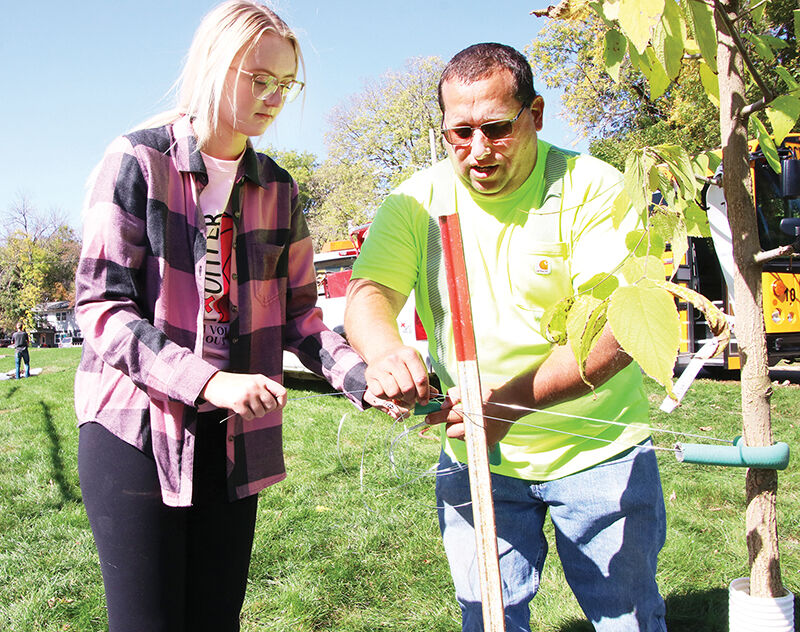 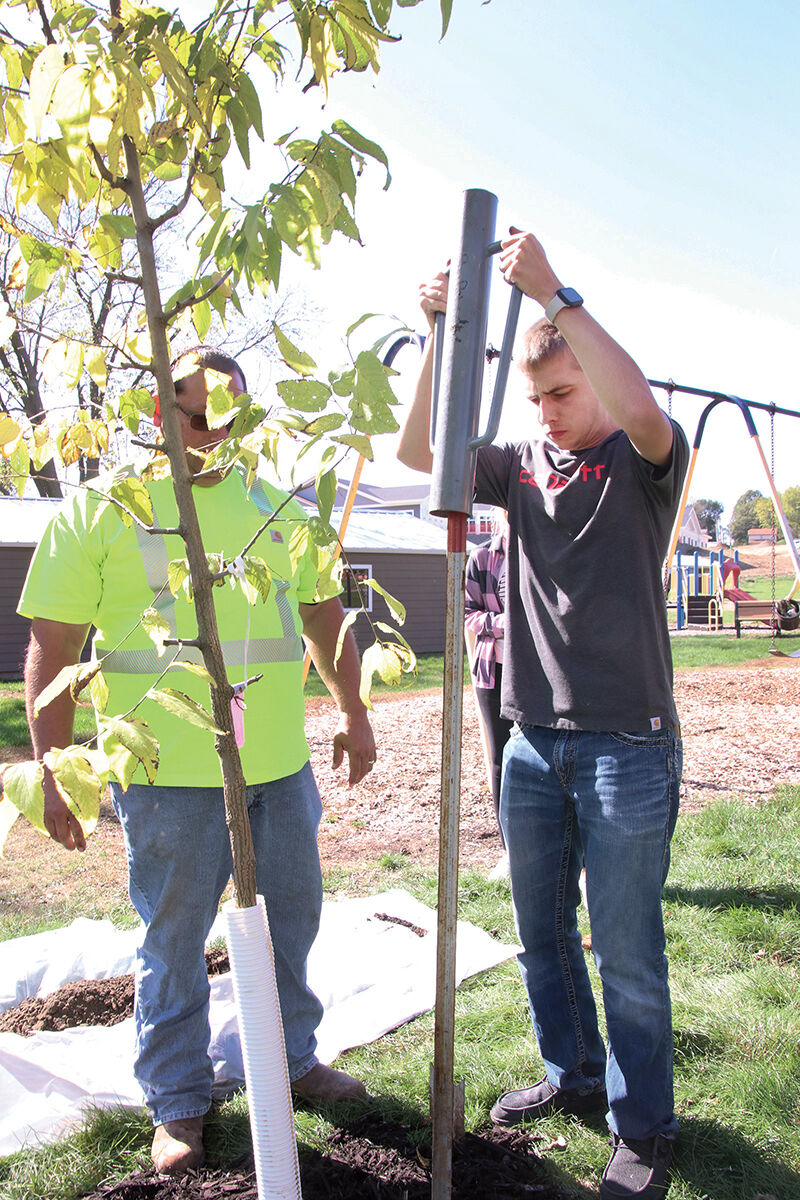 Cole Carlson pounds in one of two posts, which, along with a piece of wire passed through a piece of rubber hose, is used to stabilize a tree. 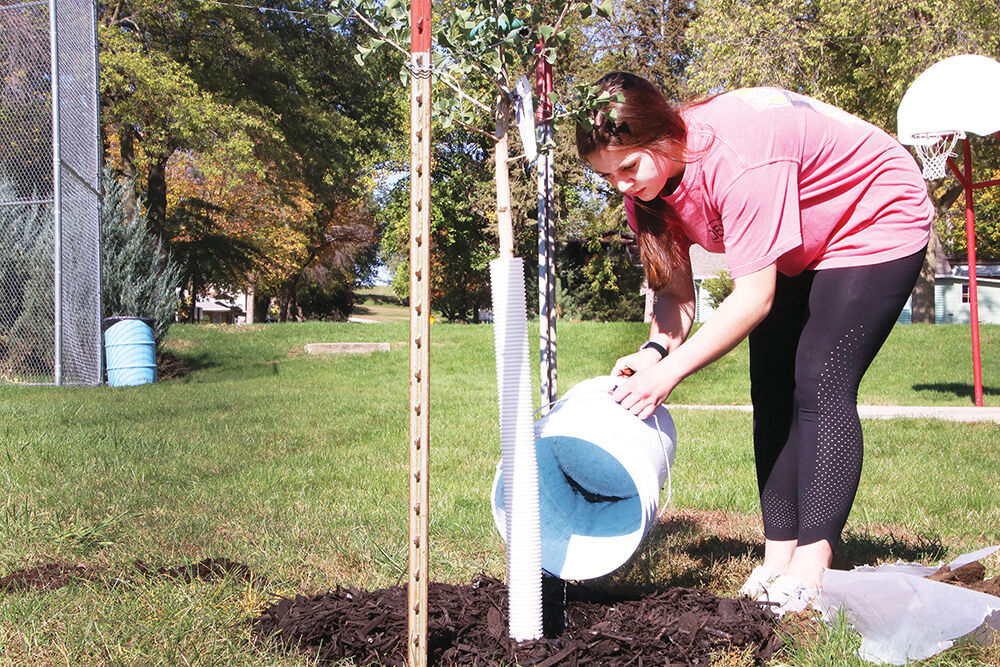 Emily Frazier gives a tree a dousing of water. A root starter is mixed in with the water. 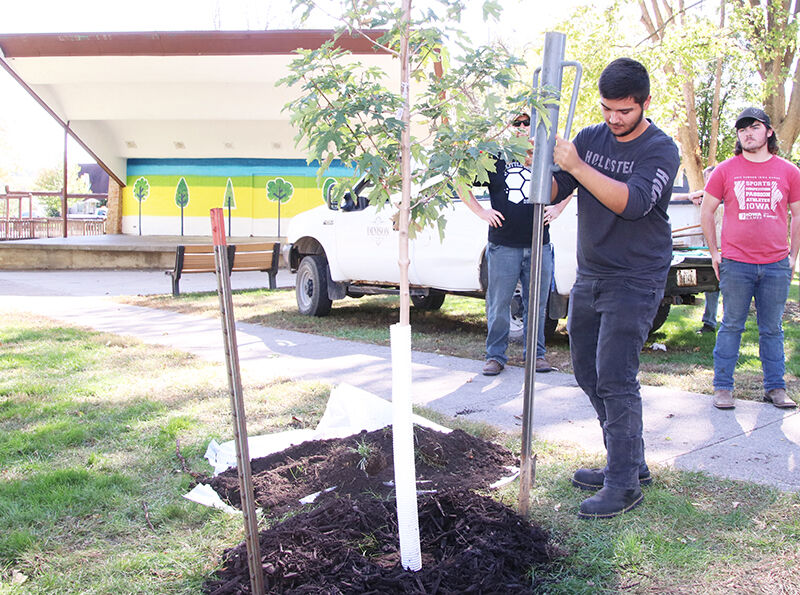 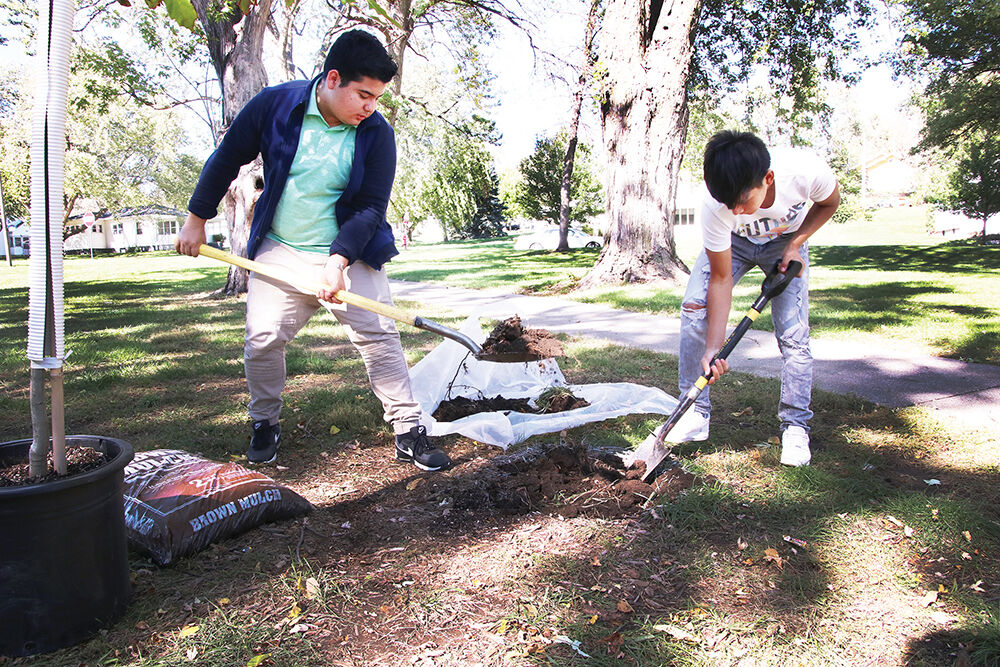 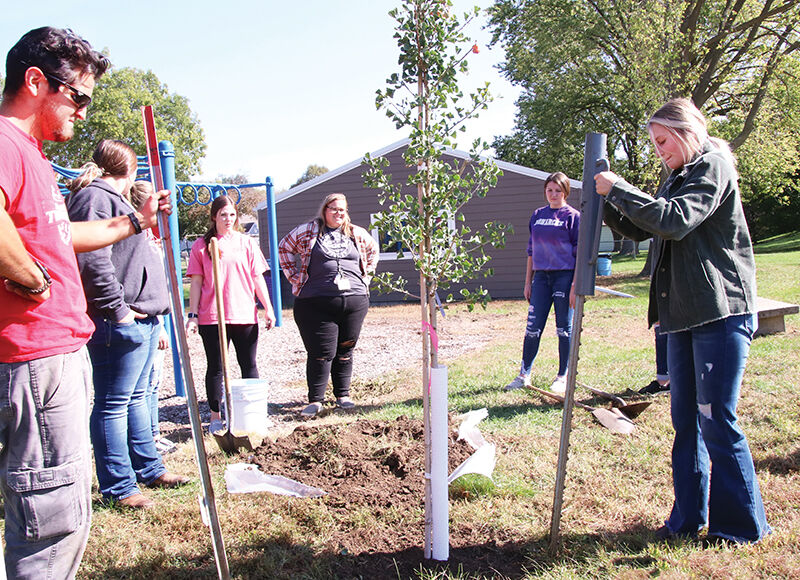 Students in agriculture classes at Denison High School spent part of their time this past week planting trees at four parks in the community.

Through the Iowa Department of Natural Resources “Trees for Kids” program, 21 trees of about seven varieties were planted.

True to the program’s name, the students did all the work. They dug the holes, planted the trees, staked the trees for stability, and mulched and watered the trees. The Denison Public Works Department provided the tools and materials needed. Public works staff, Parks and Recreation Director Brian Kempfert and agriculture teacher Chelsea Schroeder and other adults provided supervision.

The “Trees for Kids” name fits the program in other ways, too.

Eric Martens, director of the Denison Public Works Department, told students at Morningside Park on Tuesday afternoon, “The older people won’t get to see the true benefit of these trees.”

He pointed to a tree in front of him that the students had just planted and explained it may be two years before it grows an inch taller. The tree will spend those years growing its root system instead.

The scheduled planting was five trees at Morningside Park, seven at Washington Park, eight at Johnson Park (located on North 20th Street) and one at Doty Park.

Diversity is the reason different varieties of trees were planted.

Diversity not only prevents neighborhoods from losing all trees of one variety (think Dutch elm disease of years ago and the current Emerald Ash Borer infestation), but different varieties of trees offer different aesthetics and uses.

Martens pointed out that some trees have red leaves in the fall; some have leaves of other colors. Trees have different shapes and serve different purposes, he added. Some people might not like the appearance of a certain variety; some may like how it looks. Some trees mainly help wildlife.

He continued that as the students are helping to plant the trees, they can think about what types of trees they want in their own yards as they grow up and start a family.

Students who remain in Denison to start their families and those who move away and come back for a class reunion or other event can tell their kids they helped plant the trees.

Trees grow slowly but some do grow faster than others, Martens pointed out.

He asked the students to think when they are older and might consider cutting down a tree in their yard, to remember how long it took that tree to grow. He asked them to consider trimming a tree instead, adding that once it is cut down, the tree will be gone, and so will the shade it provides.

Shade is one of the benefits of trees. So is holding the soil in place. Rain on leaves helps scatter the drops so they fall gently to the ground, Martens added.

He also spoke to the students about potable versus rainwater. Potable water will always be available but will always have chemicals in it, including chlorine to kill bacteria. Rainwater is not always available but it can be collected and stored from a variety of sources – from rain gutters, for example, or even a water puddle. In addition, rainwater is at the ambient temperature so it will not shock plants.

Private graveside services for Marlys Riessen, 85, of Omaha, Nebraska, will be conducted Saturday, January 22, at Morgan Cemetery in Schleswig.

Includes refunding old bonds to save $7,000

Memorial services for Milo Schiernbeck, 74, of Schleswig, will be conducted at a later date.

Mass of Christian Burial for Lois Anne Houston, 95, of Denison, will be conducted at 10 a.m. Monday, January 17, at St. Rose of Lima Catholic …

Mass of Christian Burial for Wesley Stoelk, 89, of Westside, will be conducted at 10:30 a.m. Wednesday, January 19, at St. Ann Catholic Church…

Watch Now: What will it take to keep schools open?

Lillian Schultz, Elizabeth Cary and Elsie Jenkinson dig a hole for a tree.

Cole Carlson pounds in one of two posts, which, along with a piece of wire passed through a piece of rubber hose, is used to stabilize a tree.

Emily Frazier gives a tree a dousing of water. A root starter is mixed in with the water.