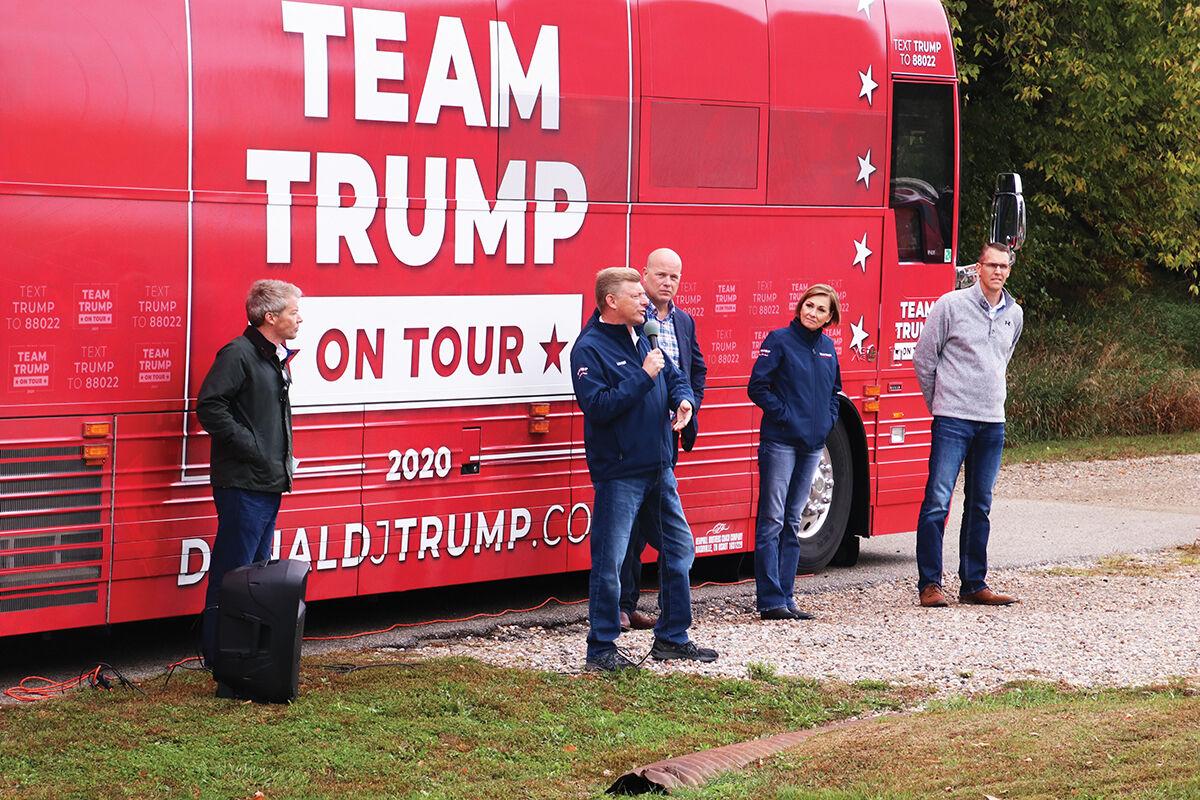 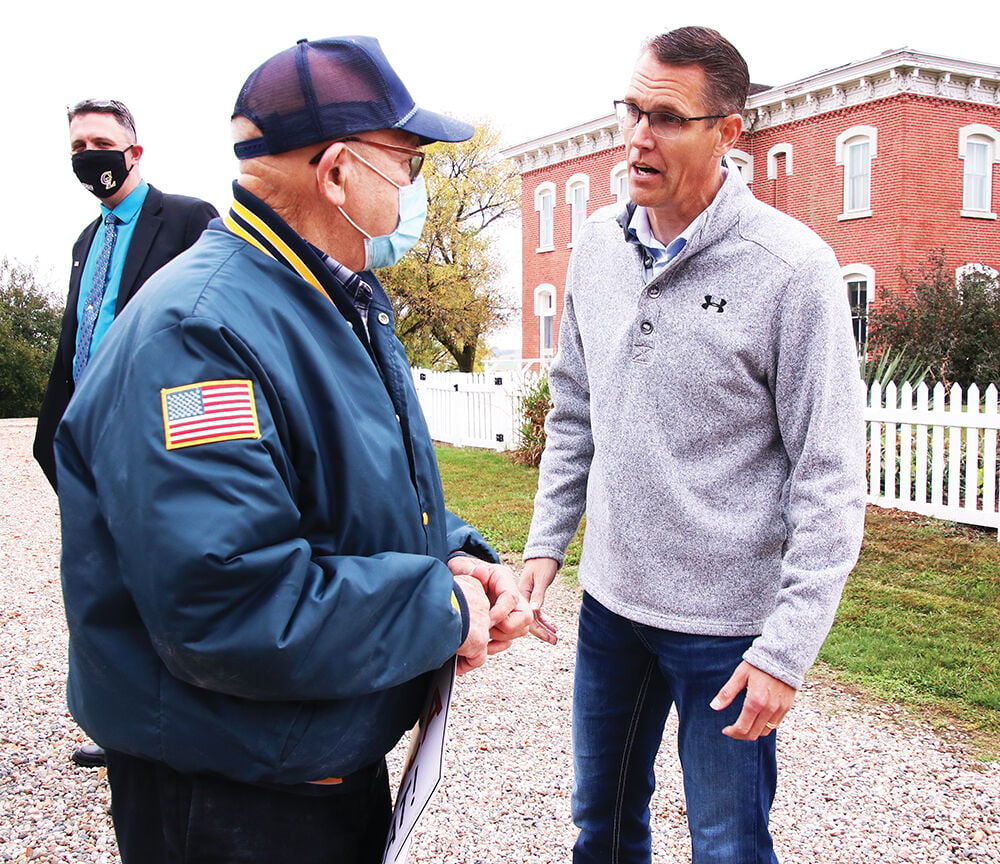 Randy Feenstra, Republican candidate for the U.S. House of Representative, Iowa District 4, talks with Loren Schultz, of Denison, during a stop of the Trump campaign bus at the Dow House in Dow City on Saturday.

Participants riding the Trump campaign bus to the Dow House in Dow City on Saturday morning encouraged supporters to help campaign and to vote and to also get one more person to vote for the Republican ticket.

Matt Whitaker, former Acting U.S. Attorney General, told those gathered on the Dow House lawn that there will not be another election like the one on November 3.

“It will likely cement the majority in the Supreme Course for a lifetime, 6-3 conservative,” he said.

Mark Lotter, Trump 2020 Campaign strategic communications director, urged prayers for a quick recovery from COVID-19 for the president and the first lady.

He added, “The president always reminds me – it’s not a campaign, it’s a movement. It’s a movement about people.”

He urged people to get out and campaign and said the campaign is about security – economic security, personal security and national security.

Iowa Gov. Kim Reynolds encouraged people to vote for Republican candidates up and down the ticket to keep a Republican majority in the state senate and house.

She added that Iowa has the opportunity to send “four strong conservative leaders to the U.S. Congress.”

Among those Reynolds referred to is Randy Feenstra, Republican candidate for U.S. House District 4, who was also on the Trump campaign bus on Saturday.

Feenstra said he wants to be on the House Agriculture Committee.

“We have to have an effective, proven voice on the ag committee to make that sure we can work hard on the next Farm Bill that comes in 2022 so we can also expand the markets in trade, ethanol and biodiesel. These are very important for agricultural producers,” he said. “It’s been a struggle in 2020 when it came to the derecho, when it came to struggles with the commodity market. We have to make sure we have a voice in Washington, D.C.”

Feenstra is facing Democrat JD Scholten in the general election. Scholten lost to incumbent Steve King, of Kiron, by less than four percent in the 2018 election

Feenstra, a state senator who completed his third term this spring, defeated King by about 10 percentage points in the primary election in June. Among the 4th District’s 39 counties, Feenstra won in 20 of them and King won in 19.

Asked how he is doing in counties outside his home base, Feenstra said, “We’re going all over the 39 counties, making sure people can hear what I have to say, that I can be a proven, effective leader, just what I’ve done in the Iowa Senate and what I will do in Congress.”

Also on the trip was Eric Branstad, national Trump advisor. He said Trump has seen photos of the Trump Tractor Parade that went through Denison in September and had cheers for the organizers of the event.

Branstad said Trump wants to be record setting in every aspect for every farmer and also is putting America and America’s workers first.

From the U.S Attorney, Northern District of Iowa

Articles can be viewed in two ways.

Open PDF documents to read transcripts of the forums.

Meeting in special session on Monday, the Denison City Council discussed the need for adding a street commissioner to the Public Works Department.

Randy Feenstra, Republican candidate for the U.S. House of Representative, Iowa District 4, talks with Loren Schultz, of Denison, during a stop of the Trump campaign bus at the Dow House in Dow City on Saturday.