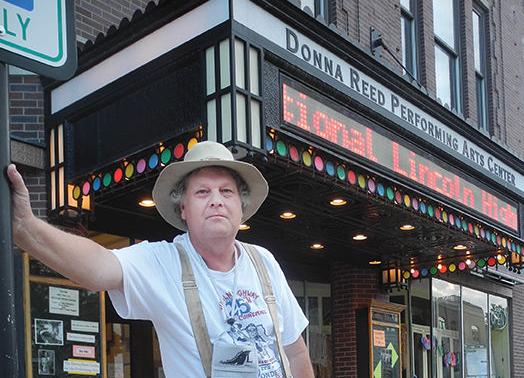 John Fitzsimmons, also known as “Lincoln Highway Johnny,” has a connection to Crawford County. His parents grew up in Vail. Fitzsimmons, the artist-in-residence for the Lincoln Highway Association, poses outside the Donna Reed Theater in Denison following a program at the Denison landmark building. Photo by Gordon Wolf 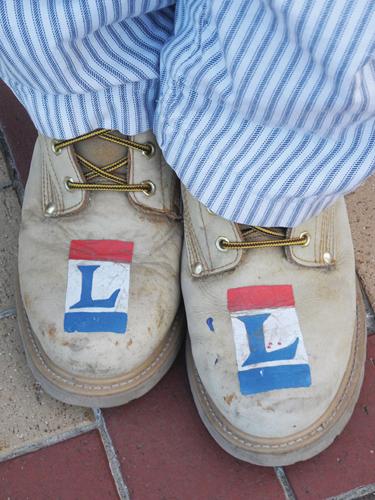 John Fitzsimmons, also known as "Lincoln Highway Johnny," has an amusing story of why he painted the Lincoln Highway logo on his shoes. Photo by Gordon Wolf 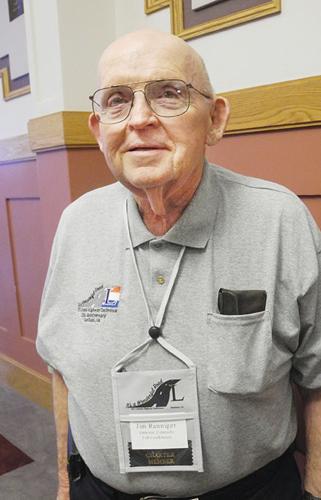 Denison has been host to a number of Lincoln Highway Association (LHA) members this week who are in town for the national conference. For some of the visitors, the stay in Denison is akin to a homecoming. Their roots are planted in the historic coast-to-coast highway and are also tapped into the community.

Twenty years ago, Jim Ranniger, of Littleton, Colorado, helped organize an adventure on the Lincoln Highway in Iowa. Dubbed “River to River on the Lincoln Highway,” a caravan of 58 LHA members from Colorado spent more than a week stopping at the numerous attractions along the route, traveling from the east to the west. About two-thirds of the vehicles were RVs, said Jim, who is a charter member of the Lincoln Highway Association, which formed on October 31, 1992, in Ogden.

The group rented the Donna Reed Theater for a viewing of the movie “From Here to Eternity,” for which Denison native Reed was awarded the Academy Award for Best Supporting Actress.

But Jim has a closer connection to Denison than the 1997 road adventure that passed through the community.

His father, Cliff, was from Denison, and his grandfather, F.F. Ranniger, lived in a house on the east edge of Denison where Mearl and Lillian Luvaas formerly lived. Lillian died in 2009; Mearl, the “Thoughts by the Old Guy” columnist for the Denison Bulletin and Review, celebrated his 95th birthday on March 9.

Across the highway from the house, F.F. built a gas station, said Jim. The construction was of concrete blocks, with concrete block pillars supporting the canopy over the pumps.

Jim grew up in Gowrie but would travel by the house and gas station about every three weeks on the way to visit his maternal grandmother in Dow City.

He said after World War II, housing was scarce, and the gas station’s canopy was closed in so someone could use it as a place to live.

When Highway 30 was expanded to four lines leading into Denison, the gas station was demolished, but the house is still standing.

One of the attractions visited in 1997 by the caravan members was the Dow House in Dow City. It happened that Lillian was working at the house and it dawned on her that she recognized the Ranniger name from the abstract for the house in which she lived.

John Fitzsimmons is a great storyteller. A founding LHA member when he was 32, John is from Boone, via Eureka, California. He grew up in Placerville, California, which is also on the Lincoln Highway.

As the artist in residence for the LHA, he is known as “Lincoln Highway Johnny.” He creates works of art about the Lincoln Highway, all for viewing, not for sale. A display of his work was at the Boulders Conference Center for this week’s national conference.

Another strong connection with the route is that John’s grandfather, Pat Fitzsimmons, helped build the Lincoln Highway.

“Back in 1992, everyone was excited about starting the Lincoln Highway Association,” he said. “But we had to find out where it was.”

The location of parts of the original route, dedicated on October 31, 1913, by the original Lincoln Highway Association, was unknown.

One of John’s jobs was to help paint the red, white and blue Lincoln Highway logo on telephone poles along the route.

John can be distinguished from his fellow LHA members by the overalls and hat he wears, and the Lincoln Highway logos he painted on the toes of his shoes. He told how that came about.

He and a partner were painting the highway logo on telephone poles in Boone County in 1992. He was standing 10 feet up on a ladder, and a swirling wind was blowing the paint in circles.

“I looked and had more paint on myself than on the pole,” he said.

“Then I looked down and saw there wasn’t a drop of paint on my shoes. So I said I would train the paint to make an “L” on my shoes.”

Like others, John has a connection not only with the Lincoln Highway but with Denison and Crawford County. He said his father, Glenn Fitzsimmons, and mother, Rosemary (Segebart), grew up in Vail and knew the Mullenger family – Reed’s family.

His mother and father moved to California in 1953. His father died three years ago at age 89. His mother is 82 and lives in Eureka.

This week, John called his mother and said, “Guess where I am. At Cronk’s.”

In her youth, his mother often stopped at Cronk’s after roller skating outings.

“She said they had the best burgers,” said John.

In addition, his mother’s cousin worked at Cronk’s.

For John the association is not only about preserving the history of the historic route but is also about the people.

“I like attending the conference because I see people I don’t get to see all the time” said John.

But he can’t attend every national conference. He last attended one in 2013 in Kearney, Nebraska.

He wanted to but was unable to attend last year’s conference in Gettysburg, Pennsylvania; he is a civil war reenactor.

“Every year we are losing members and are losing fine workers,” John said. “I want to see them.

“Everybody loves the road and the history,” he added.

“There’s something about the Lincoln Highway, but it’s not just about the concrete. It’s about what’s along the highway - the buildings and the heritage.”

You can read more about Lincoln Highway Johnny at https://lincolnhighwayjohnny.wordpress.com/

Digging into the past: radar scan reveals possible graves

Initial results are back from a ground penetrating radar (GPR) survey of a hill about three miles south of Dow City.

A new drive has started to support the Burns family as Adam Burns, a Denison High School math instructor, begins a new round of cancer treatme…

A development for smaller homes has been proposed for the Fineran Addition on a cul de sac street just west of South Main Street in Denison.

Marcia Bachmann, of Denison, is looking for live traps that can be used for catching feral/stray cats.

Update: More information about fatal accident in Denison on Thursday

The challenges of Crawford County hills and wind

Firefighters honor one of their own

Fire and rescue vehicles from throughout the area formed a funeral procession for Margie Gorden, a veteran of the Dow City-Arion Fire Departme…

Rachel Desy has been the office manager at the Chamber & Development Council (CDC) of Crawford County since starting in November of 2012.

Report: Video games seems to have an unbelievable effect on kids' IQ

Report: Video games seems to have an unbelievable effect on kids' IQ

John Fitzsimmons, also known as “Lincoln Highway Johnny,” has a connection to Crawford County. His parents grew up in Vail. Fitzsimmons, the artist-in-residence for the Lincoln Highway Association, poses outside the Donna Reed Theater in Denison following a program at the Denison landmark building. Photo by Gordon Wolf

John Fitzsimmons, also known as "Lincoln Highway Johnny," has an amusing story of why he painted the Lincoln Highway logo on his shoes. Photo by Gordon Wolf