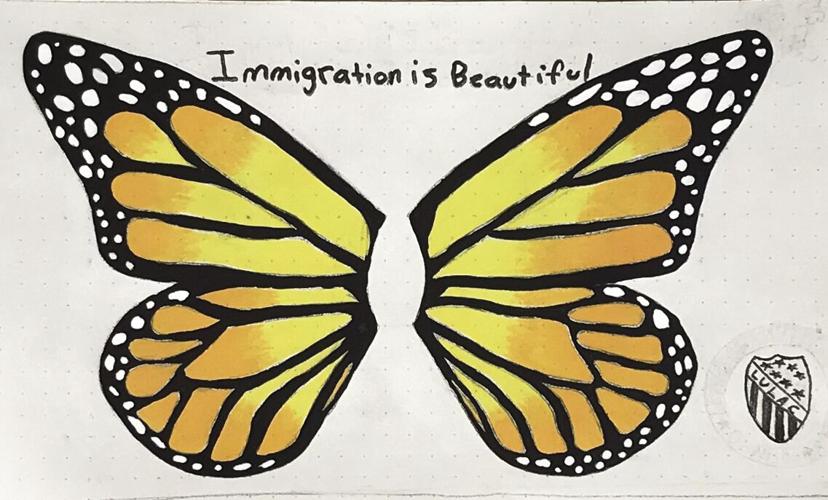 The middle section of Isabel Gutierrez’s winning mural design. See inside for the full mural.

Pictured above is the full design for a mural to be painted on the south side of the band shell building at Washington Park in Denison.

Volunteers needed to paint on Saturday

On Sunday, Isabel Gutierrez was announced as the winner of a competition to design a mural for the south-facing wall of the band shell at Washington Park.

Gutierrez will be a sophomore at Denison High School this fall.

“She’s young but she has a lot of talent,” said Alma Puga, president of the Denison chapter of LULAC (League of United Latin American Citizens). “She also does face painting and she started her own business.”

Gutierrez’s design was chosen from a selection of four finalists.

The other artists whose works were considered were AJ Whitfield, Denisse Garcia, and Haley McAndrews.

All of the artists were present at Washington Park for the announcement on Sunday.

The competition started in December 2021 when submissions were sought for mural designs to celebrate immigrants of the past, present and future in the community.

A monarch butterfly, which is commonly seen as a symbol of immigration because of its migration habits, was required to be a part of the design.

The design was also required to include a pair of wings set at the proper level to appear behind someone in a photo.

The phrase “immigration is beautiful” was also to be included.

Puga said the Denison LULAC board’s vote on the entries was very close.

Puga said she was happy with the submissions and liked the colors and meaning of the winning design.

“It represents our community,” Puga said. “It shows we’re united because we’re all immigrants.”

Puga is excited to see the project move toward completion and happy the competition highlights a local artist.

The mural will be painted between 10 a.m. and 2 p.m. this Saturday during Market in the Park at Washington Park.

Volunteers are needed to help with painting.

“So bring old clothes and meet us at Washington Park at 10 a.m.,” Puga said.

She hopes to complete all work on the mural in the allotted time.

Gutierrez will accompany several LULAC Denison members to the park after dark one evening this week; an image of her artwork will be projected onto the band shell to allow her to outline the design.

“That way, it will be ready to go for volunteers to start painting on the 18th,” Puga said.

The mural will be in place for the unch afte“People will have the opportunity to take pictures and we’ll be uploading them on our social media account to help draw people in to our festival as well,” she said.

Individuals interested in helping paint the mural may just show up on Saturday.

Jack Webb, the manager of the water department for Denison Municipal Utilities (DMU), received a round of applause as his last board meeting c…

Jennifer Smith, who spearheaded a volunteer fundraising and labor project in 2019 and 2020 to renovate the mini golf course at the Denison Aqu…

Brings local knowledge to the job

Held, Rowedder reach milestones of service on Denison School Board

Council waives $2,400 in assessment fees for Boysen due to problems with sidewalk and construction

On Tuesday the Denison City Council approved the waiver of $2,400 in assessment fees for Roy Boysen in connection with the development and con…

The middle section of Isabel Gutierrez’s winning mural design. See inside for the full mural.

Pictured above is the full design for a mural to be painted on the south side of the band shell building at Washington Park in Denison.