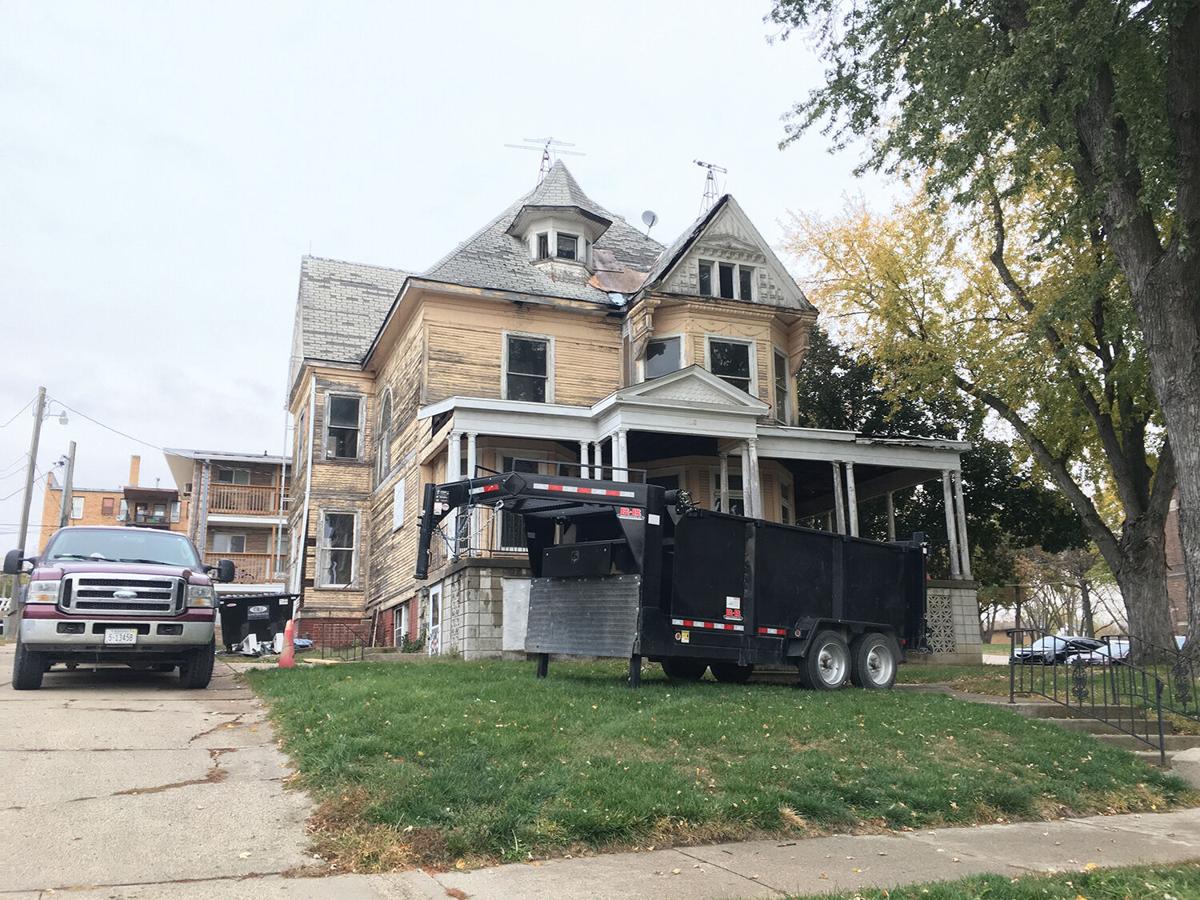 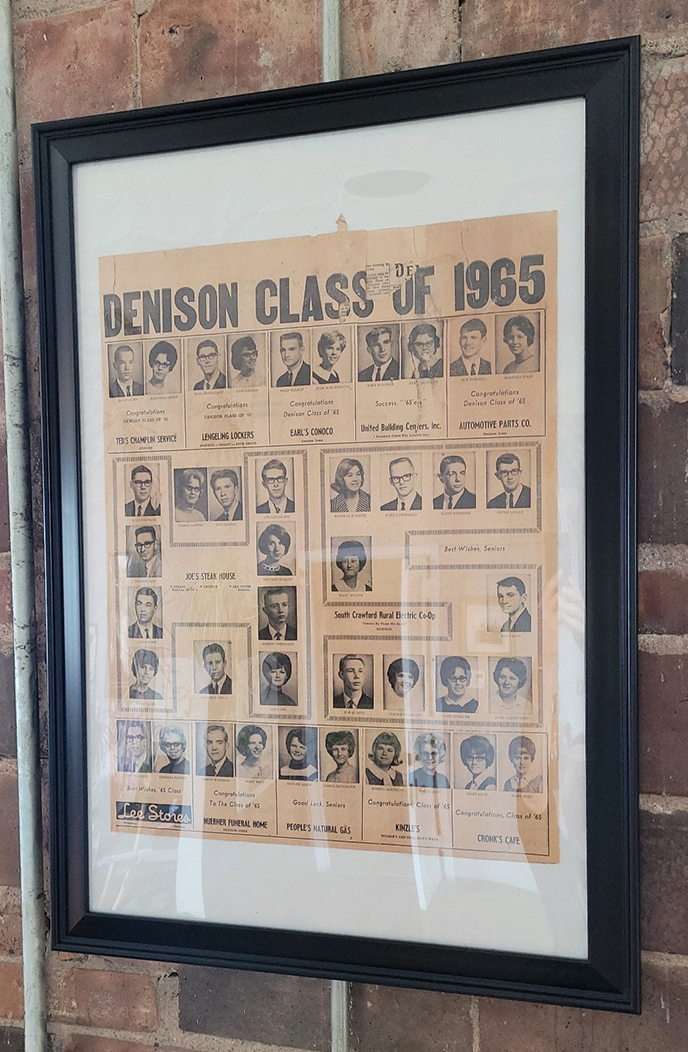 “I can barely go a day without walking around Denison and having someone ask me the exact phrase, ‘How’s that house coming along?’” said Ken Kahl.

“That house” is the Shaw Mansion at the corner of 1st Avenue South and 15th Street in Denison.

It has been vacant for more than a decade and has suffered damage from the weather, animals and the passage of time.

Kahl, owner of Crawford County Abstract, in Denison, took over ownership of the house at the beginning of January.

Work in and around the house has progressed steadily this year, though the coronavirus pandemic slowed progress, Kahl said.

The World of Construction class from Denison High School helped kick-start the project in the spring.

“The construction class did a lot of work cleaning out the house, which was a big project considering all the extra walls and carpeting and garbage in the house,” Kahl said. “They really helped to clean it out and make it so we could work in there.”

Help from the students ended when classes in the Denison Community School District were suspended in March.

Kahl and several friends continued to work in the house through the spring and into the summer.

He also hired two individuals, Todd Meehan and Trinton Dahleen, to work on the house.

Kahl met Meehan when he was a member of the DHS construction class.

“Todd was a bit of a leader among his peers, so this summer when I needed help I sought him out,” Kahl said. “He immediately said yes and I started him working on the house.”

Meehan and Dahleen are both interested in learning about house restoration, Kahl said.

“Having this job has changed their career goals because they’re so excited about his kind of a project,” he said. “The learning process for them and the mentorship is something that has turned out to be really fun.”

The interior of the house has largely been cleaned out at this point.

“Now we can really see what it’s going to look like in the end,” Kahl said.

His plan is to return the house to use as a multi-unit rental property, which is what it was prior to being boarded up about a decade ago.

Roof repairs were to have started on Monday, but snowfall kept the roofing crew from starting work.

“The roof work is starting later in the season than we’d hoped but the roofing crew is excited to get it done before winter truly hits us,” Kahl said.

The roofing crew will be dealing with several significant holes and soft spots in the roof, as well as removal of extra bathroom vents, TV antennas, and lighting rods; they will re-sheet much of it to ensure the integrity of the roof.

Holes in the roof are the cause of most of the damage that needs to be repaired inside the house.

“Some of the floors under where the roof had been leaking felt soft, right away,” Kahl said. “Once we removed the shag carpeting and the subflooring, we could see that the joists were completely rotting away. The biggest roof leak goes to the basement, and there is damage to every wall and every floor in between.”

Part of a floor in the basement had deteriorated so badly that it couldn’t be pulled out as whole boards.

“It was just a shag carpet on top of a wood floor on top of dirt, so when we were pulling up, that wood floor came up by the handful because it was so rotten,” Kahl said.

“It was neat to see this dirt that hadn’t been touched in over 100 years and how packed it had gotten.”

A discovery with a personal connection came from under the subflooring on the third story of the house.

The newspaper included the graduation pictures of some individuals who still live in area communities.

“It’s especially important to me because we found my deceased father’s high school graduation portrait in these pages,” Kahl said. “It helps me think of him as we progress, and how he would appreciate the Shaw Mansion project.”

Kahl framed the newspaper and has it on display in his office.

Most of the inside work in the house at present involves work on walls and floors.

Kahl is dedicated to keeping the house historically accurate.

“I think there will be a total of two doors moved slightly, otherwise most of it is restoring the original floorplan of the house,” he said.

The house will eventually include a common area on the ground floor, which will be used by the residents and will also be available to the public as a rental space for events.

“That will probably be the last area we focus on,” Kahl said. “I’d rather work on getting people living there so we can start to cash flow the place as soon as possible.”

He expects the work to take another year or so.

This week, Kahl is borrowing money against his personal home to pay for structural work in the mansion.

“That money should get quite a bit done and get the building in good enough condition that a bank will be able to trust it as collateral for a commercial loan,” he said. “Right now the shape that it’s in is not sufficient for any bank to touch.”

Kahl’s work at Crawford County Abstract has kept him busy recently, but he said he makes sure to get to the house and get dirty a couple of times every week.

He and several others plan to involve the Shaw Mansion in Halloween in Denison this year.

“We are planning to have trick or treating,” Kahl said. “We’ll have a bucket or a kettle down on the sidewalk and we’ll be sitting on the porch and we’ll have some basic decorations out.”

They plan to give out chocolate gold coins.

“I think it’s very fitting because Leslie (L.M.) Shaw was a champion of the gold standard,” he said.

The appearance of the former Adams Motor Company property along Highway 59/141 on the west side of Denison will soon turn greener.

The Crawford County Board of Supervisors on Tuesday discussed and dismissed the possibility of issuing a mask mandate for county residents.

CCMH tires from the strain

“They are getting tired,” said Crawford County Memorial Hospital (CCMH) President and CEO Erin Muck of the staff at the hospital. “They’re all…

In 1981, Doug Wiebers was just out of college and looking for a job. He found one with the City of Denison when Jim Laubscher hired him as a p…

UTV ordinance to be amended

The Crawford County Board of Supervisors on Tuesday set a hearing date for an amendment to the county’s UTV (utility terrain vehicle) ordinance.

Rachel Desy said she recently spoke to Santa and Mrs. Claus and both are very excited to return to Crawford County to visit with local childre…