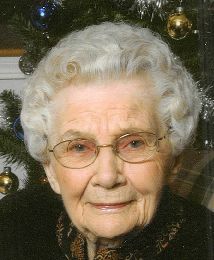 Irene (Petersen) Aikman October 4, 1919 - April 25, 2020 Irene Erma (Petersen) Aikman, the daughter of Miller and Margaret (Christensen) Petersen, was born on October 4, 1919 at her home in rural Kimballton, Iowa. She attended grade school in Kimballton. At the age of 12, Irene's father, Miller, passed away while transporting hogs. Irene and her family ended up living with her Grandparents during this time in Audubon where she would graduate high school. She loved to visit her Aunt Rose during the summer. One time during a visit, she met this boy named Myron who went to school and was friends with some of her cousins. Myron was Irene's soulmate; the two were married in 1936. To this union, three children were born: Gene, Kenneth, and Joanne. Irene was the rock of her family. She was a wonderful, submissive wife who worked hard with and for her family. She worked hard on the farm doing outside chores, took care of the flowers growing around their house, and she had a big garden with an awesome strawberry patch. Irene never complained and she never had a bad word to say about anyone. Although she loved keeping her flowers up and gardening, she also loved playing horseshoes with her husband. But most of all Family was the most important thing to Irene. Myron had recorded himself playing the accordion and dedicated the songs he played to his beloved wife. Her son Gene would stop every morning and she always had a pot of coffee waiting for him while they talk when living on the farm. She also enjoyed when her grandchildren would come and share their life stories. Her life was a true testament to her family. 34 years went by since she lost the love of her life, Myron. Irene was never a person to give up, but she had always missed her love. On Saturday, April 25, 2020, Irene went home to be with the Lord, attaining the age of 100 years. Greeting her at the gates of Heaven are her parents, her husband Myron, son Gene Aikman and his wife Shirley, son-in-law Stanley Kraan, granddaughter Kimberly Lewellyn, brother Wayne Petersen, and sister Rose Kolln. Those left to cherish her memory include her son Kenneth Aikman and his wife Beth of Quitman, Texas; daughter Joanne Madsen and her husband Dale of Clarksburg, West Virginia; honorary daughter-in-law Charlyn Aikman of Lewisville, Texas; grandchildren Debra Janssen and her husband Curt, Terri Starns, Kristy McGrath and her husband Mike, Kevin Aikman and his wife Ronda, Tammy Powell and her husband Mike, Troy Aikman and his wife Capa, Allison Irene Jarman and her husband Todd, Jason Kraan and his wife Pamela, and Joshua Kraan and his wife Sherah; 22 great-grandchildren; 19 great-great-grandchildren; and several other family members and friends. A private family funeral service was held at Pauley Jones Pfannebecker Funeral Home in Denison, Iowa on Wednesday, April 29, 2020 at 10:00AM. Burial followed the funeral service at Lincoln Township Cemetery in Gray, Iowa. Officiating the service was Pastor Chad Trunkhill. The soloist was Allison Irene Jarman singing "Holy Ground" at the funeral home and "In the Garden" at the cemetery. Pauley Jones Pfannebecker Funeral Home assisted the family with funeral arrangements.

To plant a tree in memory of Irene Aikman as a living tribute, please visit Tribute Store.