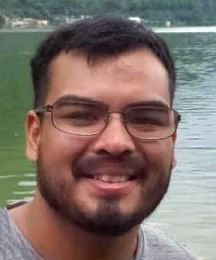 Jorge Cabrera June 29, 1993 - May 22, 2020 Jorge Cabrera was born to Leonel Cabrera and Maria Del Rosario Solares on June 29, 1993 in Lexington, Nebraska. He attended school in Worthington, Minnesota as well as Ar-We-Va Community Schools, graduating with the class of 2011 from Ar-We-Va. For college he attended Kirkwood Community College in Cedar Rapids, Iowa. Jorge worked at Land O' Lakes Purina Feed in Sioux City, Iowa. Jorge loved his Minnesota Vikings. You could almost always find him at Buffalo Wild Wings cheering for his team on any given Sunday. What he enjoyed the most in his life was to volunteer and help people doing any sort of task from giving a helping hand in the kitchen to yard work with his father. Jorge had a large heart when it came to others. Jorge Cabrera Solares, 26, of Vail, Iowa, passed away on Friday, May 22, 2020. He is survived by his father and step-mother Leonel and Fidencia Cabrera of Vail, Iowa; his mother Maria Del Rosario Solares of Guatemala City, Guatemala; his siblings Carolina Cabrera; Mario Cabrera of Guatemala; Lucia Cabrera of Tennessee; Harlo Cabrera of Grand Island, Nebraska; Cenobio Barrientos of Grand Island, Nebraska; Julian Barrientos of Lexington, Nebraska; Berenice Barrientos of Dalton, Georgia; Cenaida Barrientos of Dalton, Georgia; Julio Barrientos of Vail, Iowa; along with many nieces, nephews, uncles, aunts, cousins and friends who loved him very much. A CDC regulated public viewing was held on Friday, May 29, 2020 at Boulders Conference Center in Denison, Iowa from 3:00 PM to 6:00PM. A funeral service was held after the public viewing from 6:30 PM to 8:00 PM. Officiating the funeral service was Pastor Eduviges Perez. Pauley Jones Pfannebecker Funeral Home was in charge of arrangements.

To plant a tree in memory of Jorge Cabrera as a living tribute, please visit Tribute Store.