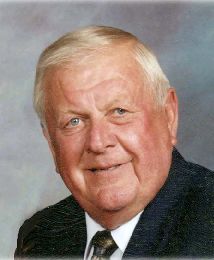 Carlton (Carlie) Petersen October 22, 1934 - May 10, 2020 Carlton (Carlie) Dietrich Herman Petersen, the son of Hans and Frieda Engelking Petersen, was born on October 22, 1934 in Schleswig Iowa. He passed away on Sunday, May 10, 2020 at the Crawford County Memorial Hospital in Denison, Iowa at the age of eighty-five. Carlie was baptized and confirmed at the United Church of Christ in Schleswig and later converted to Catholicism. A graduate of the Schleswig Community High School, Carlie entered the United States Navy in 1952 and completed Naval Reserve Recruit Training at the U.S. Naval Training Center in Great Lakes, Illinois on June 14, 1952. He was honorably discharged from the Navy on January 6, 1955 and again served his country in the United States Army, receiving an honorable discharge on March 21, 1960. Carlie was united in marriage to Catherine 'Kay' Powers June 9, 1958, at St. Ann's Catholic Church in Vail, IA by Father D.L. Clark. The couple made their home in Vail for one year prior to establishing their lifelong residence in Schleswig. Carlie and Kay were blessed with the birth of two children, Kimberly and Kurt and two grandchildren, Taylor and Alexa, who brought great joy and purpose to his life. He was a beloved caretaker of his wife during her battle with cancer. Carlie had an illustrious life-long career in the construction field as owner of Petersen Construction, a Schleswig-based company founded by his father. Having received on-the-job training from his dad, Carlie brought second generation growth to the company working on large-scale projects throughout many counties. Civic and community contribution was also an important part of Carlie's life. While serving as the Mayor of Schleswig for fourteen years, Carlie took great pride in upgrading the town's water system and building a sister-city relationship with Schleswig, Germany. Carlie and Kay traveled to Germany to participate in Schleswig's festivities and reciprocated by hosting the German mayor and his wife during their visit to the U.S. Carlie was also an instrumental committee member in constructing Ida Grove's Sacred Heart Catholic Church, volunteering numerous hours and building expertise. When Carlie wasn't working or volunteering, his other greatest passion was socializing with friends and family. Prior to his retirement, he enjoyed participating in a bowling league, sharing fishing tales and golf stories at the Schleswig Country Club and attending weekly social outings. Carlie was a faithful Uptown Happy Hour attendee, enjoying gregarious conversation with lifelong friends and business associates. An avid sports fan, he faithfully cheered on the Green Bay Packers, Iowa State Cyclones and Notre Dame Fighting Irish. His love for fine food and wines paired well with the vegetable garden he grew and tended. Carlie was preceded in death by his parents; his sister LeeAnn Petersen and more recently his wife, Kay in 2012 and daughter, Kimberly Simeus Petersen in 2019. Survivors include: his son Kurt and his wife Tracy (Kuhlmann) of Bennington, Nebraska; two grandchildren: Taylor Petersen of Aurora, CO and Alexa Petersen of Omaha, Nebraska; one sister, Joleen Petersen of Omaha, Nebraska; son-in-law, Dumas Simeus of Dallas,Texas and other dear relatives and friends. His stubborn German way of dealing with life and getting things done will be greatly missed! Private Family Services were held 10:30 A.M., Friday, May 15, 2020, at Huebner Funeral Home in Schleswig, Iowa with public visitation starting at 9:00 A.M. Fr. Richard Ball officiated the service with interment in the Morgan Cemetery in Schleswig. Music selection included "On Eagles' Wings" by Josh Groban. Serving as pallbearers were Kurt Petersen, Taylor Petersen, Daniel Foreman, Dennis Gierstorf, Dennis Huebner and Gorden Petersen. The Huebner Funeral Home in Schleswig was in charge of arrangements.

To plant a tree in memory of Carlton Petersen as a living tribute, please visit Tribute Store.