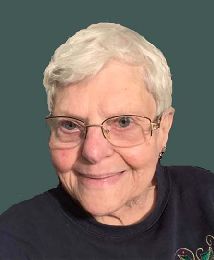 Frances JoAnn Plagge December 25, 1931 - May 25, 2020 Frances JoAnn Plagge was born December 25, 1931, in Union Township, Crawford County, Iowa, the daughter of Delbert and Clara Furne. She passed away Monday, May 25, 2020, at the University of Nebraska Medical Center in Omaha, Nebraska, at the age of eighty-eight surrounded by family who love her. JoAnn received her grade school education in the Arion school and following her education, she worked at a dairy farm in Minnesota for a few years. JoAnn was united in marriage to Louis Plagge November 14, 1951, at Zion Lutheran Church in Denison, Iowa, officiated by Rev. C.W. Schmidt. JoAnn was employed at the local packing plants, Dubuque Pack in Denison and the turkey plant in Carroll. After Louis passed away in 1987, JoAnn began her home cleaning company, Housewives, Inc. Playing cards was a favorite pastime for JoAnn, which her family lovingly says she "cheated at them". She also enjoyed listening to polkas and attending polka nights with the Collins on Fridays at the Golden Nugget. Watching The Young and the Restless on television brought her many hours of entertainment. In her younger days, she enjoyed dancing and roller skating. Cooking and baking were also favorite activities and she will be remembered for her homemade chicken noodle soup and 7-Up when anyone was sick. JoAnn loved spending time with her family, especially her grandchildren, great-grandchildren and great-great-grandchild. JoAnn was preceded in death by her husband, Louis; two sons, Kyle and Lyle; and one brother, Robert. Survivors include: three daughters, Cindy and her husband, Robert, Robin and her husband, Joe, and Lyla and her husband, Tim; one son, Myron; one daughter-in-law, Patty; thirteen grandchildren; twenty-five great-grandchildren; one great-great-grandchild and one on the way; other relatives and friends. Funeral Services were held 2:00 P.M., Friday, May 29, 2020, at Zion Lutheran Church in Denison, Iowa. Rev. Joshua Keinath officiated the service with interment in Crawford Heights Memory Gardens in Denison. Organist Karen Kahl provided accompaniment for congregational hymns "On Eagles' Wings," "Amazing Grace" and "What a Friend We Have in Jesus." Serving as pallbearers were Brandon Johnston, Jason Kuehnholdt, Troy Huisinga, Devin Plagge, Terry Goslar and Tom Plagge. The Huebner Funeral Home in Denison was in charge of arrangements.

To plant a tree in memory of Frances Plagge as a living tribute, please visit Tribute Store.