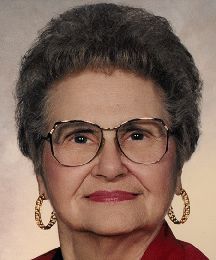 Lucille Ranniger June 17, 1922 - January 31, 2020 Lucille Jean, daughter of Ray and Edla (Peterson) Veseen, was born June 17, 1922 at Stanton, Iowa. She attended school in Stanton and graduated from high school in 1939. Lucille then moved to California and worked there for short time before returning to Iowa. During World War II, she worked in an armature plant in Sioux City. On June 10, 1944 Lucille was united in marriage with Joseph H. Thomas at Sergeant Bluff, Iowa. One son Gerald was born to this union. Joseph was a service member and the family made their home in Nebraska, New Mexico, New York and Pennsylvania before returning to Iowa in 1952. They settled in Council Bluffs, Iowa where Lucille worked for Northwest Bell Telephone Co. as a long-distance telephone operator and a PBX supervisor for nearly 25 years, retiring in 1977. After her husband's death in 1990 Lucille continued to live in Council Bluffs where she was a member of Our Savior Lutheran Church. On November 18, 1995 Lucille was united in marriage with Wayne Ranniger in Manning. They made their home on the farm near Manning. Wayne died as the result of an auto accident on January 15, 2008. Lucille continued to live on the farm after Wayne's death. Throughout her life, Lucille enjoyed playing cards and dancing. She was a member of US West Telephone Pioneers and Zion Lutheran Church in Manning. On Friday, January 31, 2020, Lucille passed away at Manning Senior Living in Manning, Iowa. She was 97 years, 7 months and 14 days of age. She was preceded in death by her parents; husbands Joseph Thomas and Wayne Ranniger; sister Arlene Lantz (Robert); and brother Calvin Veseen (Phyllis); a stepson James Ranniger. Lucille is survived by her son Jerry Thomas of Sunrise Beach, MO; two granddaughters Sarah Olson (Mike) and Erin Thomas; special friend Daisy Thomas; Step-children: Carol (Joe) Lally of Denison; William (Debbie) Ranniger of Manning; Gaylin (Jan) Ranniger of Manning; and Royce (Kathy) Ranniger of Sioux City; nieces, nephews, other relatives and friends.

To plant a tree in memory of Lucille Ranniger as a living tribute, please visit Tribute Store.