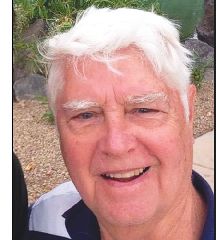 Wayne William Riley July 5, 1940 - June 20, 2020 On Saturday, June 20th, Wayne William Riley made his final move. After residing in six states and many towns throughout his nearly eighty years of life, his spirit left its home in Sun City, AZ to live eternally in heaven. He is survived by his wife of sixty years, Marlene (nee Waderich), sons Brian (Christina) of Glen Ellyn, IL, Steve (Susan) of Hilton Head Island, SC, David (Kathie) of Indianapolis, IN, and Doug (Sheryl) of Birmingham, AL, twelve grandchildren, four "grand-in-laws", and four great-grandchildren. He is preceded in death by his parents William and Gladys (nee Petersen) Riley, and his brother Wesley Riley. Wayne was born on July 5, 1940. After growing up near Denison, his career as a store manager for JC Penney took him, Marlene, and their growing family to South Dakota, North Dakota, and Indiana. Following his retirement from the retail business, he enjoyed travelling, reading, golfing, and spending time with family. During these years, he and Marlene lived in Indiana and Alabama before settling in the beautiful desert setting of central Arizona. Wayne considered family his greatest blessing, and especially prioritized quality time with his grandchildren. He taught them practical skills including home improvement, woodworking, and fishing. He played card games and watched their favorite movies with them. Most importantly, he taught them all the importance of kindness, faith in God, and a strong work ethic. Wayne knew that, with a smile, you can strike up a conversation with any stranger-which he usually did! Friendly to all, he handwrote letters regularly to keep in touch with family and friends. A memorial service will be held at 2 p.m. on Saturday, July 18 at Peace Lutheran Church in Greencastle, IN. In lieu of flowers, donations may be made to the American Cancer Society.