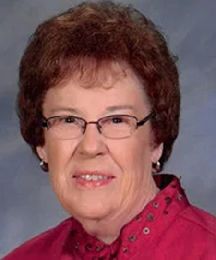 Arliss A. (Bielenberg) Schultz July 26, 1935 - June 6, 2020 Arliss A. (Bielenberg) Schultz, the daughter of Carl and Alice (Miller) Bielenberg, was born on July 26, 1935 in rural Schleswig, Iowa. She was baptized and confirmed at Friedens Evangelical & Reformed Church. Arliss was a longtime member of Immanuel Lutheran Church in Schleswig beginning with her adult confirmation in December of 1955. Arliss attended Morgan #7 School from Kindergarten thru eighth grade. She graduated from Schleswig High School in 1953. She attended night school at WIT in Denison and received an Associate of Arts degree in 1991. As a teenager during the summer time, Arliss worked as a hired girl for a farmer's wife and a waitress at a café in Storm Lake. Beginning her junior year in high school, she worked as a bookkeeper for Jack Hess at the Chevrolet motor Company and continued for 2 years after graduation. This was in addition to working at Farmers State Bank for six years. For 40+ years Arliss worked at a Denison bank and nine and a half years at Thrivent Financial. Arliss loved sewing. She always made children's clothes and did many alterations for her family and friends. In the recent years, Arliss started making jean quilts that she would not only give to family members, but donate to Veterans and homeless. She also loved her garden and taking care of her flowers around the house. Her favorite "room" in her house was her covered deck where you'd see her enjoying the outdoors with a Black Velvet and sour. Arliss was a member of the Crawford County Garden Club and many card clubs. Her favorite card game to play was Euchre. Arliss traveled a lot with her family throughout her life, and with the Prestige Club on bank trips to Hawaii, Canada, Branson, Washington D.C., and New York. But her favorite treasure was her family. Arliss was blessed with four children whom she loved dearly: Melanie, Alanna, Natalie, and Jeff. She enjoyed spending time with her grandchildren. They brought an even bigger smile to her face when they walked through her front door. On Saturday, June 6, 2020, Arliss passed away peacefully at her home surrounded by her family. At the time of her death she attained the age of 84 years. She is preceded in death by her parents; her son-in-law Jim Thelen; and brothers-in-law Robert Hess and Harold Engesser. Those left to Cherish her memory are her children Melanie Coenen and her husband Bob of Denison; Alanna Thelen of Denison; Natalie Brede of Springfield, Missouri; and Jeff Schultz and his wife Kris of Ankeny, Iowa; grandchildren Trevor Koenck and his fiancée Zoraida Hernandez; Brandon Steinkuehler and his wife Laurie; Tanner Thelen; Chad Brede; Dallas Brede; Dakota Brede and his wife McKayla; Connor, Erin, and Delanie Schultz; great-grandchildren Kaydon, Leeton, and Vera Steinkuehler; Cole Brede; Kyson and Kayda Brede; sisters Betty Engesser of Tracy, Minnesota; and Marlene Baer and her husband Roger of Schleswig; brother Dale Bielenberg and his wife Mae of Centennial, Colorado; and many nieces, nephews, cousins, and friends. A visitation was held on Tuesday, June 9, 2020 from 4:00 PM to 6:00 PM and on Wednesday, June 10 2020 from 9:00 AM to 10:15 AM at Immanuel Lutheran Church in Schleswig, Iowa. A funeral service was also held at Immanuel Lutheran Church on Wednesday, June 10, 2020 at 10:30 AM with Pastor Merle Mahnken officiating. Music was provided by Marlene Hight. Trevor Koenck, Brandon Stenikuehler, Tanner Thelen, Chad Brede, Dallas Brede, Dakota Brede, Connor Schultz, Erin Schultz, and Delanie Schultz were Casket Bearers. A burial was held at Morgan Township Cemetery in Schleswig. Pauley Jones Pfannebecker Funeral Home was in charge of arrangements.

To plant a tree in memory of Arliss Schultz as a living tribute, please visit Tribute Store.