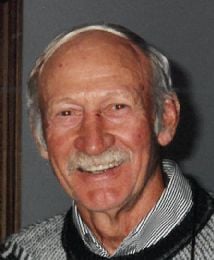 Leonard Sextro March 9, 1929 - April 12, 2020 Private Graveside services for 91 year old Leonard Sextro of Manning will be held this weekend. Public viewing will be held from 9 AM to 11 AM on Saturday, April 18, 2020, at Ohde Funeral Home in Manning. The family will not be present for the viewing, but invites you to join them for a memorial mass later on when circumstances allow. Leonard Bernard Sextro was born to John and Clara (Lechtenberg) Sextro in Manning, Iowa on March 9, 1929. He was one of 13 siblings. Leonard attended country school near his home and graduated from Manning High School in 1947. After high school, Leonard helped out on his family farm until joining the military and serving in Japan. He was later recalled in 1950 and served with the U.S. Army in the Korean War until he was wounded in combat. Leonard was discharged in August of 1951 and was awarded the Purple Heart for his injuries, Combat Infantry Badge and Korean Service Medal with one Bronze Star for bravery in action. On July 30, 1955, Leonard was united in marriage with Dolores (Laurie) Sextro in Earling, Iowa, and they made their home on the Sextro family farm in rural Manning. Leonard and Laurie welcomed three children, Greg, Teresa (Terri) and Mark. Leonard raised hogs and crop farmed with his brothers until 1985. In 1999 they built a new home on Delta Ave. Leonard was a member of Veterans of Foreign Wars, Disabled American Veterans and the Sacred Heart Church in Templeton. His faith was very important to him. Leonard was a mail carrier until retiring in 1995. He enjoyed his daily walks with Laurie, riding his bike, beating Greg in games of pool (Greg disputes this), playing cards (and beating everyone at 99), spending time with his grandchildren, cheering on the Hawkeyes and Packers and tending to his lawn, which he was very proud of. He loved to spend time outside and was very hardworking, so it wasn't a surprise that their lawn was always nearly perfect. It wasn't unusual to find Leonard enjoying a Michelob Ultra on his porch either. He and Laurie loved to travel, and they especially enjoyed Australia and Ireland as well as their annual trips to Okoboji and San Diego. Leonard and Laurie were married 62 years, and when Laurie passed in 2018, Leonard moved into the assisted living facility in Manning. He enjoyed playing cards with the other residents, taking daily walks outside and amusing everyone with his sense of humor. He was always grateful for the care he was given at Manning Senior Living. Even at 90, Leonard enjoyed riding his recumbent bike in the summer. He loved the warm weather and was able to enjoy a Caribbean cruise with his family in 2019. He was the only person we knew who enjoyed sunbathing in a sweater. He was looking forward to another tropical vacation in January 2020, but suffered a fall, breaking his hip, shortly before the trip. Leonard had a hip replacement surgery on February 29, 2020 and suffered several health issues leading up to his death on Easter Sunday, April 12, 2020. He loved life and lived it to the very fullest, even beating his stage 4 lung cancer diagnosis in 2017. At the age of 91, Leonard knew it was his time and told his family that he had lived a good life and that he was ready to see Laurie again. Leonard is survived by his son Greg Sextro (Sandra) of Manning, and son Mark Sextro (Clint) of San Diego, California; a sister, Marie Sextro of Carroll; a son-in-law, Mike Buffington (Adele) of San Diego; four granddaughters: Katie Sextro, Grace Sextro, Jennifer Buffington, and Marit Buffington; brothers-in-law Don Gross and Warren Meier; sisters-in-law Marlene Gross, Diane Gross and Dora Sextro; and nieces and nephews. He was preceded in death by his wife, Dolores Sextro; his parents; daughter, Teresa Buffington, 11 siblings: Helen Lampe, Leo Sextro, Edward Sextro, Herb Sextro, Dorothy Masching, Norbert Sextro, Ruth Vanderheiden, Maxine Meier, Edna Sextro and two infants at birth; a sister-in-law Connie Gross; brothers-in-law Francis, Bernard and Melvin Gross; niece Faith Steinkamp; and nephews James and Stephen Gross and Thomas Vanderheiden.

To plant a tree in memory of Leonard Sextro as a living tribute, please visit Tribute Store.